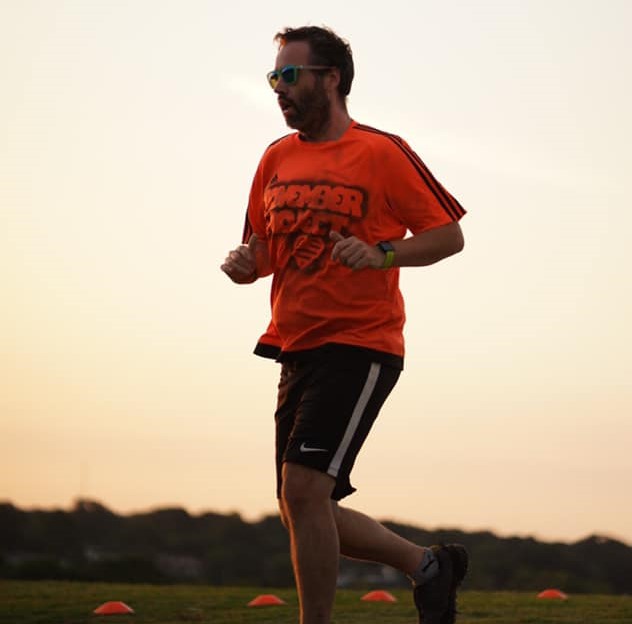 I’ve been contemplating writing this blog for some time and had even started it a few times but I couldn’t quite make up my mind about what to write.  Originally, I had planned to write about my struggles with obesity, anxiety, depression and other life hurdles that have made things challenging for me over the years and how joining the Virginia Beach November Project tribe has been life altering.  All of this is true of course but I realized something…this isn’t just about me…this is about something greater than all of us.  This blog entry is dedicated to a concept that all of us yearn for as human beings, a concept that binds us together with bonds stronger than steel but more flexible than rubber, a concept that allows us to thrive in an environment of love and support.  This concept may not be the reason most of us starting coming to November Project, but it is almost certainly the reason most of us keeping coming back:  Fellowship.

According to the Oxford dictionary, the definition of fellowship is ‘a friendly association, especially with people who share one’s interests.  Pretty simple concept, I’d say, at least on the surface, right?  We get together as a group, twice a week to workout out (common interest), and support each other in that endeavor (friendly association).  Sounds simple but I think it goes for a beyond that.  Bear with me.  This morning, I woke up at 5:00 am, on a Saturday, so that I could meet a group of tribe members for an early morning run.  I typically struggle getting up early when I don’t have to and this morning wasn’t any different but I got up anyway.  Yes, I’m training for a race (like most of us are!) and thus, yes, I needed to get in a long run this weekend anyway.  That’s not why I got up.  I got up because I didn’t want to let down my tribe members.  I wanted to inspire and be inspired.  I wanted to be in it together because we all know how much of a grind these long weekend runs can be.  It’s amazing how quickly you wake up and get energized when you step out of your car and one by one, your tribe starts showing up, ready to go.  Funny thing is, none of us actually ran together.  I mean, we all started at the same time but had different paces/distances that we were doing.  It didn’t matter.  We were in it together.  The point I am trying to make is that it wasn’t just about the common interest of exercising, it was about the human connection, the belief that other people can add something valuable to our lives, it was about fellowship itself being the common interest.

I remember the first time I ever showed up to a November Project workout.     My wife, who many know commonly as ‘The Rainbow Unicorn’, suggested that perhaps it would help if I joined her in going to this free workout group that she had been attending for the past year.  I thought she was insane and that the idea of getting up ass early to work out with a bunch of weirdo strangers that liked bouncing, hugging and god knows what other kind of weirdo cult rituals, was insane too.  Yet, she persisted in trying to convince me to come because of how much she loved it.  It’s important to note that my wife is an extreme introvert that fears talking to strangers and dislikes hugging more than most people hate spiders.  Despite this, she had been attending these workouts for almost a year at that point, consistently getting up early and meeting these people before I even got out of bed most days.  In retrospect, that should have probably been a clear sign that something remarkable was happening but it took a while to finally convince me to give it a try.   I don’t remember much about that first workout itself (other than that it kicked my ass), but I do remember thinking that this group that called itself “November Project” consisted of some of the friendliest and most open strangers I had ever met.  Granted, they were all a little bit crazy (but in a good way) and WAY too chipper for the ass crack of dawn but I immediately felt like I belonged.   Despite feeling like I had been run over by a truck, by the end of the workout, I had already decided that I wanted to come back, partly because I was thoroughly humbled by how terrible my fitness was but mostly because I had a great time.  I have to admit, those first two weeks were rough.  Most mornings I was dragging ass and suffered from continual soreness, but I persevered and was hooked.  I drank the Koolaid and it was delicious.   It didn’t take me long to shift my view as being someone that worked out with a group called the November Project to someone that was working out with his tribe.   You know, it’s crazy to think about now, but looking back, I think this was one of those rare, pivotal lynch-pin moments that feels like it changed the course of my life forever.  Without really understanding it, I was seeking this kind of fellowship and until I fell into my tribe’s open arms, I had no idea what I was missing.  Sound a bit dramatic?  Well, here’s the evidence, you decide.

First, I’ve found an amazing community to which I feel like I belong and I have had the privilege and honor of forging some incredible friendships.  We all probably know how difficult it can be to make new friends, especially when you get past school age, move to a new area or just don’t think you have the time.  At some point, we have to become somewhat responsible adults (not all of us luckily) with jobs, families, etc. and it’s easy to lose sight of how important fellowship truly is in our lives.  Thanks to November Project, I get to see many tribe members three, four or even five times a week.  Hills and Thangs, Swim Club, what have you, I take any and every opportunity I can to spend time with my tribe.  It’s awesome.  When I can’t make a workout, I feel incomplete.  When I’m injured and I can’t work out or am resting for a race, I still get up ass early to support the tribe and socialize (and get my hugs!).  I miss my tribe when I’m out of town and (I hope) they miss me too.  I changed my work schedule so that I could make both Wednesday and Friday workouts.  If you had asked me a couple of years ago if I’d ever do anything like this, I would have told you that you were nuts.  This is the power of fellowship.

Second, if I wish it, I no longer have to do ANY activity solo, there’s always someone up to do whatever.   Competing in a race?  I’m there.  Going camping/hiking/kayaking?  Hellz yes.   Going for a bike ride? Sure, let’s do it.   Going for a swim?  I’m your Huckleberry.  You name it and there’s always someone else that is excited to go with you.  I mean, how cool is that?  When I think about all the times I went on long runs, hikes or bike rides by myself, I realize how lucky I am that I essentially never have to do that again (if I don’t want to).  Don’t even get me started on how amazing it is to get up with tribe members before and after races!  I used to show up, run the race, maybe drink a beer or two and leave.  Now, I stay until they shut the place down!  Having a group of awesome people that want to share this fellowship and that treasure this sense of community is a magical thing.

Third (and least), November Project has enabled me to make incredible improvements in my overall fitness and health.  I remember clearly how much I struggled my first few weeks doing November Project workouts.  It was hard.  I wanted to quit.  Some of my tribe members may even remember me when I first started, it was rough.  However, the tribe’s continued encouragement and support led me to dig deeper than I ever thought possible.  I remember one particular work out where I was really struggling and exhausted.  As a burnout, we sprinted up the side of a hill (Mt. Trashmore, what!) and after a brief burst, I started to slow down significantly, almost to the point of walking.  Out of nowhere, this dude came rushing past me like a bat out of hell and I instinctively pushed past my exhaustion and gave it everything I had to keep up.  It wasn’t the fact that he passed by me that got me.  Hell, there are plenty of people that are much faster than I and I’m ok with that.    It was the fact that this person was struggling also, yet pushed himself as hard as he possibly could.  It was inspiring and it made me want to work harder.  Thanks to November project and the fellowship of my tribe, I can run faster, do way more pushups, burpees, etc. than I ever thought possible.  I have more fun playing soccer, I can climb a rope, I can do pull ups, I actually enjoy running and can do a long list of other things I didn’t think I’d ever be able to do.  It’s quite remarkable.

I feel like I’m where I’m supposed to be – if that makes sense – like I’m living the life now that I was always meant to live – and it’s incredibly satisfying – and I feel extremely fortunate.   I realize that all of this probably sounds a bit over the top but I speak my truth and I’m forever grateful to the November Project and my tribe for this incredibly valuable gift that I will treasure for the rest of my life (which will be longer now thanks to November Project!).  I came for the workouts, I stay for the community.

Peace, Love and Thanks to my friends, my tribe, my family.