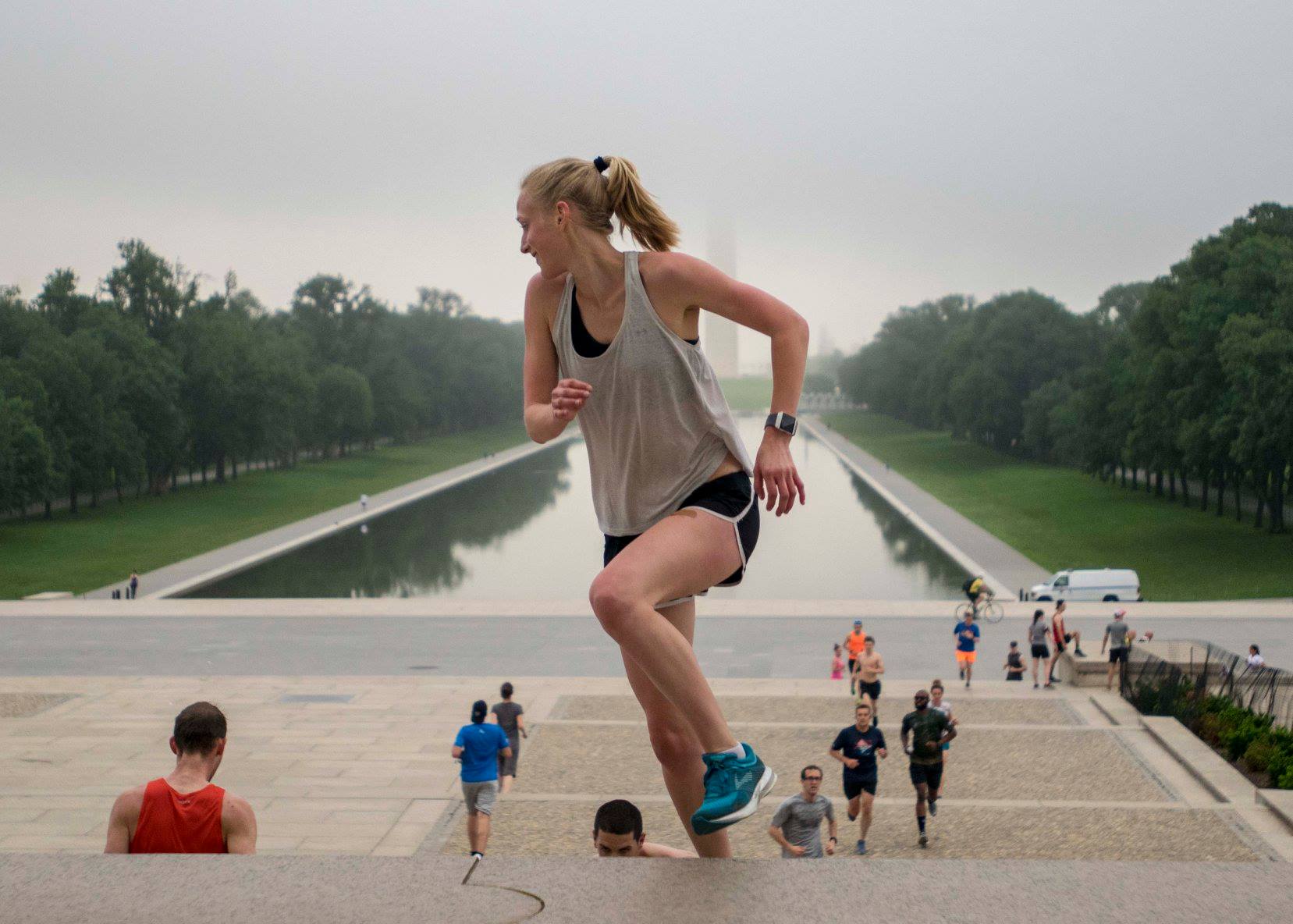 I can’t remember the last workout Maddie Greathouse missed. Either my memory’s poor (possible!) or Maddie doesn’t not just show up. While A+ attendance is in no way a requirement for receiving the Positivity Award, it certainly doesn’t hurt and it’s one of myriad reasons we handed it to Maddie last week. Now, get to know her. You can say hi, too, at Wednesday’s workout. I’m just gonna go ahead and #verbal for her for both 5:25 & 6:20.

How, when and where were you introduced to November Project?
One of my best friends is from Richmond and always did the NP Richmond workouts when she was home on college breaks. She told me to check out the DC tribe when I moved to DC for law school.

What do you remember about your first workout?
The first workout I went to was at the end of August [2018] – so.much.humidity – and it was the Rabbit and Hare workout where two people chase a third up the steps of Lincoln. I am very competitive and do not like to lose, which is why I had never worked out with other people before, so in theory the workout should have been a terrible experience. I lost every single race with my teammates and it wasn’t a great feeling, but ultimately everyone was cheering everyone else on and I went home feeling energized, so I came back. I am still competitive with myself, but not so much at NP – I like to push myself, but more than anything I love the social aspect.

What motivates you to keep you coming back?
According to the Meyers Briggs test, I am an introverted extrovert – I get my energy from being around other people. I initially kept coming back to NP in order to diversify my workouts, but over time the reality is that I keep coming back because there is nothing better than going to a 9AM class or to work knowing that I have already gotten in some exercise, (hopefully) showered, and was able to enjoy a relaxing coffee break with some incredible people.

What does winning the Positivity Award mean and represent to you?
The thing I love most about NP is that, more than anything, the community values compassion, grit, humility and humor. It doesn’t matter how “fit” (however one defines it) you are, how photogenic you are working out, or whether you’ve run any or many marathons. The people at NP have really done a number on me – I’ve come to realize that I would much rather work to live than the other way around, and being healthy isn’t about the size of one’s muscles or the time it takes to run a mile. It’s about having the ability to enjoy life, to be outside, and to bond with other people. The fact that NP has a Positivity Award and not a “fastest runner” award, or something else along those lines, just proves that while getting in exercise is important, NP is more about the people than the workout. I hope that winning the PA means I’ve helped contribute to the spirit that NPDC projects into the community.

Describe for us your favorite November Project moment to date.
Rather than a single moment, I think generally its all the breakfasts after the workouts. There’s nothing quite like rolling up to a coffee shop all sweaty with a hoard of equally sweaty people, tired from a good workout, and then just getting to relax for 45 minutes before everyone has to get on with their days. One workout that really sticks out though was the NoLa themed workout we did in honor of Kim – it was bittersweet because a member of the tribe is no longer with us, but at the same time, it was such a positive and energizing workout, and the sense of community was so strong throughout (and who doesn’t love channeling their inner unicorn while running around Lincoln or holding chair pose?!).

I can’t remember the last time you missed an NP Friday. What do you enjoy most about NP Fridays?
I didn’t start going to Friday workouts until last fall because I was always afraid that I’d get lost finding my way to the workouts. Don’t get me wrong, I don’t think I’ve gotten to a Friday workout without taking at least one wrong turn or wandering aimlessly for a while yet, but I’ve *almost* always managed to be find my way before the bounce.

Living in DC, it’s so easy to just find your bubble and stay in it –  you hang out with the same people, go to the same coffee shop, and never leave your quarter of the city. Friday workouts have been a great opportunity for me to explore new areas of the city. Getting to try different coffee shops after them is just an added bonus. Plus, if meeting a crowd of strangers all at once feel intimidating, Friday workouts tend to be more intimate with more partner exercises and fewer people in attendance – it’s a perfect way to meet a few people who will help you navigate the more crowded Monday and Wednesday workouts.

What’s your favorite NP workout?
I don’t know that I have a favorite circuit, but I do love the workouts when it’s freezing cold or raining hard. There’s a sense of solidarity among everyone that showed up – we look ridiculous and it’s miserable before things get going, but the sense of accomplishment is all the greater after the fact, and the coffee afterward somehow tastes so much better.

You can only eat one food the month of August. What is it?
Trail mix. Not only because I am pretty much never without a bag of it to munch on, but also because trail mix can be made up of so many different things, so basically I just hacked this question – combine anything with nuts and it’s trail mix.

Who’s your role model and why?
Outside of my family, Lucille Ball has always been a hero of mine. Let’s take a look a the reasons why, shall we? She was the first woman to run her own production company. She refused to have an actor besides her actual husband, Desi Arnaz, play her spouse on I Love Lucy, which resulted in being in the first interracial marriage on a television show (producers tried to dissuade her because they feared controversy would cause the show to fail). Desi Arnaz was also younger than Ball, which defied societal norms at the time. And, when Arnaz and Ball got divorced in real life, her subsequent show The Lucy Show was one of the first to focus on an unmarried woman. Let’s not forget the fact that she defied pressures of the time for women to be polite and demure, and took slapstick comedy to a new level, paving the way for modern-day leading ladies like Tina Fey. On a different note, I would be remiss if I didn’t include the US Women’s National Soccer Team as some role models – crushing the World Cup while in the middle of a lawsuit for equal pay? Clutch move right there.

What’s on your summer reading list?
I am a sucker for a good english murder mystery book, preferably set during WWII. Not sure why, but there a ton of books that fit this niche description and I am all about it. The single book I am most excited to read, though, is Jonathan Van Ness’ first book, Over the Top – it doesn’t come out until September, but I am so hype for it. An unsolicited bit of advice – listen to his podcast, Getting Curious. So worth it.