This weekend, the NPATL tribe lived true to The North Face’s motto of #NeverStopExploring. We jam-packed THREE events into one weekend: a day-long outdoor adventure, an overnight camping retreat, and a Sunday morning run. We had so much going on; we had to have three people write up the recap. So, here it goes.

Here’s the rundown of activities. Did anyone complete it all?

After my shoulder injury, I was out for leading the bike. Thanks to the tribe members that stepped up to navigate the group on the Stone Mountain PATH – Joev Garvey, Niamh Dolan, Maddie Giegold, and Stu Lipkin. They made all the riders feel comfortable riding on the roads! 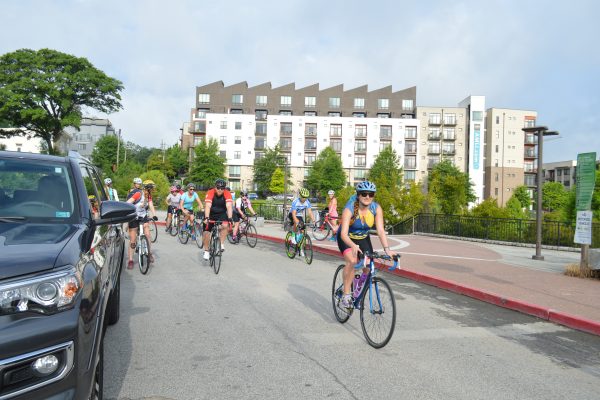 We teamed up with Big Peach Running who brought out water, a tent for shade and nutrition, and our fearless tribe member Matt Taylor led the large group runners on a 5 mile run around Stone Mountain on the Cherokee Trail. 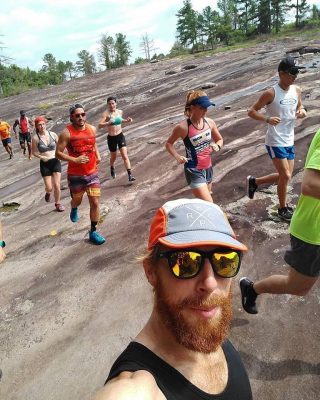 HIKE up and down Stone Mountain (2 miles RT)

We were worried that a 12:30 pm hike would be miserably hot. But we were blessed with a cooler front of summer storms the night before, and a cloudy sky hung around most of the day. As our group reached the top, we saw a wall of rain in the distance, slowly moving toward the mountain. We admired the view of Atlanta and the surrounding metro areas. The Debate began- do we yoga?

YOGA at the Top of the Mountain

Yes… we did yoga. Yoga Steve, the leader from NP’s Buffalo tribe, led us in a short and quick flow yoga on the mountaintop. A few raindrops hit us, and we feared the downpour was coming. But then, as we finished in Shivasana, we realized that the rain never came! 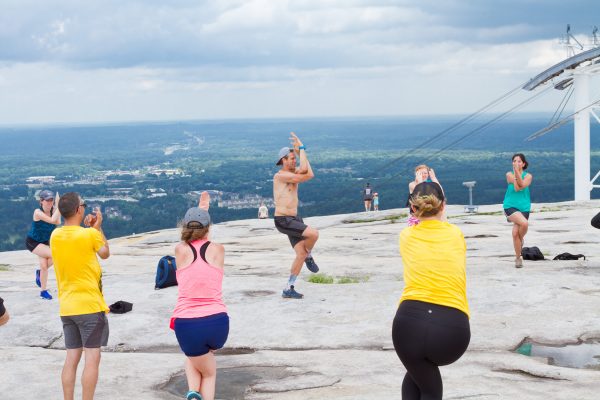 SUP on the Lake

Our friends at Mountain High Outfitters supplied us with SUP boards, and Tracey Pearson from Prissy Tomboy led groups out into the lake, teaching them the foundations of stand-up paddleboarding. Everyone who biked or drive the 3-mile journey to the far side of the mountain had a blast!

There was only one crisis during the event – tribe member Ben Nantasai got stung by a yellow jacket on his ankle less than 10 minutes into his trail run. Now, for some it would mean a painful ankle. For Ben, it was life-threatening. He is severely allergic to yellow jackets. He called me as he began running back to our tent. The few of us that stayed behind for the run went into overdrive, looking for his epi-pen. I sent tribe member Casey Nicodemus running out to meet Ben on the trail. I didn’t tell Casey which way they went…. So naturally, Casey ran in the wrong direction. And he didn’t have his phone. Ben called again, saying he was almost back to the tent. He hadn’t seen Casey. Another person was sent to bike around the road on the mountain looking for Casey; someone else ran the trail in the opposite direction. When Ben arrived, we gave him Benadryl and ice. Finally, 10 minutes later, Casey was tracked down and returned. He saved the day by administering the epi-pen. Then another tribe member, Winnie Lojk, stepped up and took Ben to the ER so that he could get treated when the epi-pen wore off. Tribe member Courtney Mueller drove to the hospital to stay with Ben while he was on watch at the hospital for a few hours. Ben survived the incident but had to cancel his plans to head to The North Face’s Basecamp event in Chattanooga, as he had doctor’s orders to stay inside and recover. What this showed to me was how connected and selfless our tribe members are. Everyone pitched in to help. You can’t beat the community in our ATL tribe!

One of the biggest things we got out of this day’s event is the number of new friends that we made. Throughout the day, we met several new faces who hadn’t yet attended our workouts, some due to location or work schedules. For us to be able to show more people what NP was all about was HUGE! We hope to do another event like this soon!

Even with all the fun activities the Atlanta Tribe planned this weekend, we managed to get some members out to Chattanooga on Saturday and show support to Brogan and The North Face for all that they do for NP globally.
Yoga Steve and I kicked off our Saturday with some 7:30 am hot yoga to get our minds and body prepared for the epic weekend that was in store. We then proceeded to Stone Mountain for running, hiking, and yoga. The plans to head to Chattanooga right after were throw off slightly when Ben got stung and was rushed to the ER. (see above in Stone Mountain Recap.)
Ben was originally going to drive, so we called an audible and luckily Amanda Trevisan saved the day by stepping up. We even recruited newbie Emma D’Antoni to come last minute literally as we were walking down Stone Mountain. The 4 of us had some serious carpool karaoke happening on the way to Basecamp.
We arrived excited and ready to give out hugs to all the ATL tribe members who drove up that morning. Brogan was hyped and rocking his new RUNATL tank! 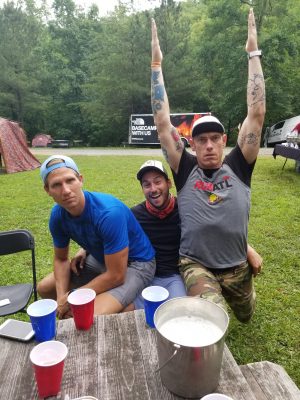 The North Face did an amazing job putting together such a cool event. Tents everywhere, live music, games, tasty food, libations, and the gorgeous backdrop of Lula Lake Trust Park. NP members were able to bond and get to know more about each other over campfires and a few drinks.
After the sunset and the stars came out, a few of us decided to put together a late night NP swim. We grabbed some headlamps and made our way to the lake a mile away. Thankfully no one got hurt or died, especially the Olympian who did some night cliff jumping!
Early the next morning a group of us went for a hike to check out the impressive waterfalls in the park. It was the best way to start your Sunday! We went back to Basecamp to pack up and then headed to downtown Chattanooga for some tasty brunch. As always BG had some interesting table conversations. “Ohhh, brother!” 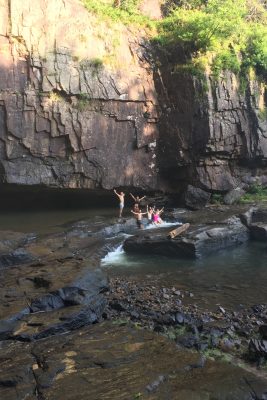 We ended the trip with yoga led by Steve next to the Tennessee River. Check out BG’s Instagram to see the time lapse. We then said our goodbyes and made our way home. The past 72 hours was a whirlwind of constant go, but a weekend we won’t soon forget. If a Basecamp event comes near you, don’t think, JUST SHOW UP! 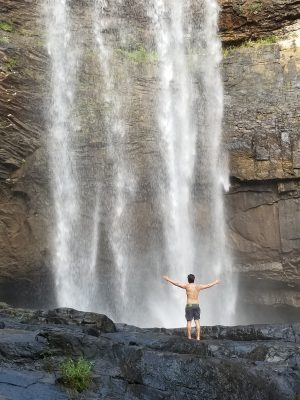 Today was not just any other Sunday. Today was Global Sports Bra Squad Day. You are probably scratching your head and wondering what this is. Well, November Project NYC tribe member Kelly Roberts created this day to encourage women to shed their shirts and feel confident about their bodies. Over 90 cities had organized and hosted their very own sports bra squad day, and Atlanta was one of them. Co-hosted by November Project ATL and Big Peach Running, more than 30 participants gathered for a 3-mile fun run to commemorate the day. It was a typical hot and humid Atlanta summer day, but runners were greeted with complimentary snacks and coffee from Cafe Celaque (a local coffee company) post-run while some lucky folks won prizes from a raffle. The event ended with a 30-minute yoga session to relax and cool down. Thanks to Kelly for the inspiration for this day and reminding us that together, we break through stereotypes. 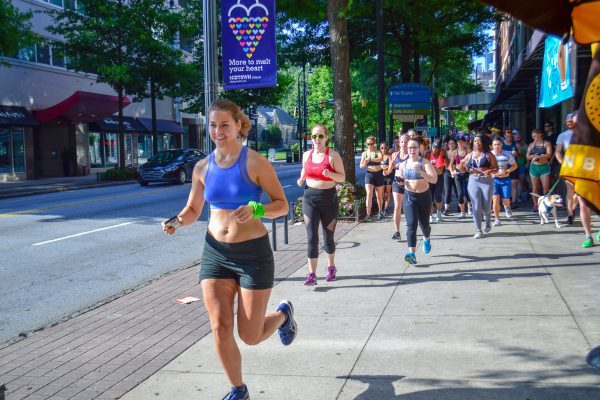 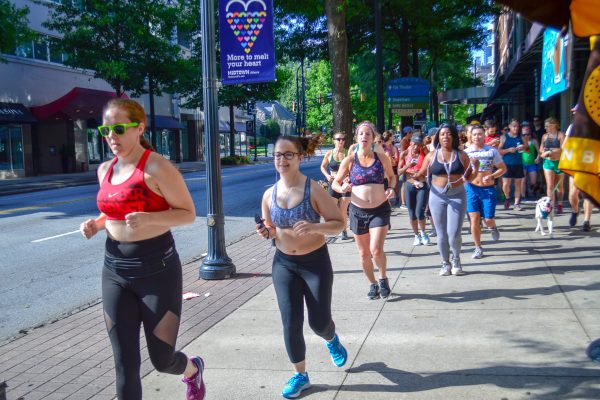