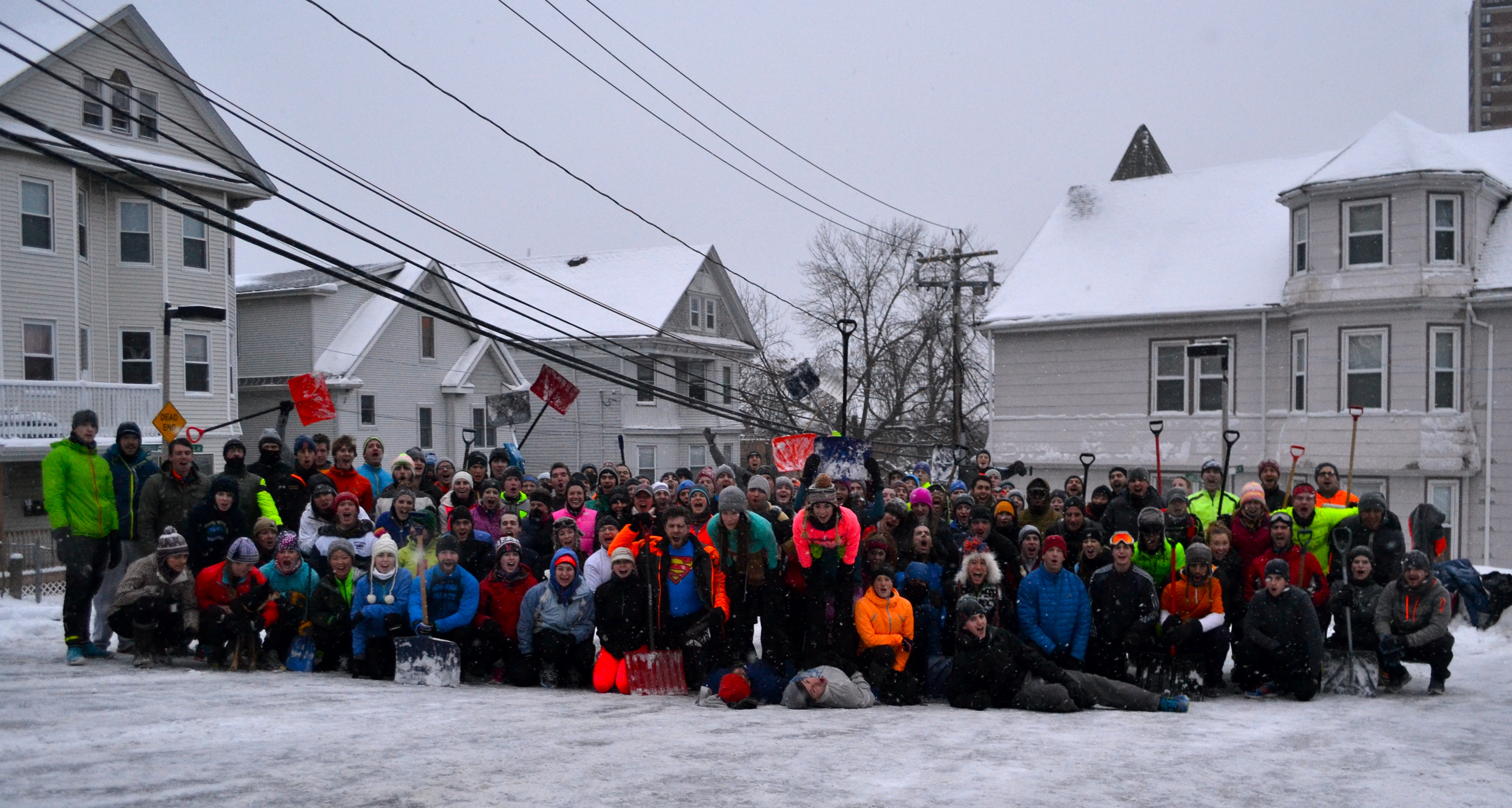 Today was an odd workout to say the least.

For the first time in slightly over 1,000 years, we moved the Wednesday location from Harvard Stadium to another location. We made our way out to the snowy Parker Hill Ave in Roxbury for a chance to try something new. Because of the traditional New-England-Snow-Freak-Out-Over-A-Few-Inches we were able to host round two of the run/shovel team workout called Shovel Shuffle.

But come on, there is no hill in town that can be as hard as the Harvard Stadium, right? Well, at 7:10AM after 35 mins of shovel/sprints on Parker we settled into a beast of a moment. We faced uphill inside a side lot that was halfway up the hill and measured badass levels with a full Sebastian. Seven minutes of burpies took many of us up near or over the 100 rep mark.

Please follow closely as we update you tomorrow with our fresh new #NPSUMMIT video, possible CBS coverage, and location news for Friday’s workout.

“Props to Those Guys”
That’s what CBS Meteorologist Justin Drabick had to say about the 17 of us (4 of which were newbies) who braved 13.5 inches of snow and a wind chill advisory to rise & grind with the NP PHL tribe. (Our recruiting efforts to Mr. Drabick are ongoing).

Due to snow, broken sleds & other debris covering the steps we ran a few warm-up circles in knee high snow around The Washington Monument Fountain. We got busy with sets of burpees & push-ups, in true racing fit fashion these hardcore folks broke up into teams to run relay sprints with a twist & finished up with sets of jump squats & lunge jumps. The tribe did run up those snow covered steps to meet the news crews & have them shoot our group photo. We hugged & headed out to meet the day posthaste!

One would think this weather would conjure such notions that “it’s too cold” “this is brutal” or maybe “I gotta get outta here to warm up” but the tribe was full of wild smiles & hearty hugs in a mad effort to keep moving & keep warm.

To those who made it out, you are RAD! Keep coming back – see y’all next Wednesday
#PhreePhitness #weatherproof #getfit #stayfit #justshowup

I could sit here and talk about how cold it was, how there were 15 mile-an-hour winds whipping freezing cold shit at our face, how our steps were covered with deep drifts. Yeah, I could tell you all about that as you sit, sipping your morning coffee, planning your snow day nothingness, reading about how miserable the tribe was this morning.

Or so you might think. But no, there was no misery on the steps of Fed Hill this morning. Just 12 badass runners knocking on Mother Nature’s door, calmly asking her “is that the best you got?”

Due to some large snow drifts our workout was slightly modified but the tribe ascended the ladder none the less. Tribe newbie Frank could have cared less that he was running through ankle deep snow and cruised through the workout like it was 60 and sunny and beach week was coming up. Kaci Wright and Car Dom Sob also braved the elements for their first workout. Kaci is from Alabama but seemed pretty goddam unfazed by our wintry mix.

Patches O’Neil and I are pretty proud of this tribe right now. In case anyone hadn’t heard, Patches (or Pat, which he claims is his real name) is one of two new co-leaders along with Sydney Van Horn who shall be gracing us with her presence next week. Look for their smiling faces, then hit them with a snow ball and give them a bear hug.

Come join the tribe next Wednesday, same time, same place. Next week is important because it’s Race Week but also because we’re going to be graced by some lovely media attention. So show up, bring a friend, bring a dog, bring your toddler…it’s NP time.

I love checking the weather before a workout. How many layers today? Weather.com: “-1 degree, feels like -1 degree”. Ha, not bad at all. No wind, downright balmy. We should have a good turnout. Psych. Mother nature took a character building nose dive this morning and peeps be bailin’ on their verbals like dying houseflies.
Never fear #Power10, our fierce #NPIndy core members don’t give a f&%$ about the weather (honeybadger voice) and appropriately tore it up this morning: dynamic warm-up, light run– are my lips and cheeks struggling to form wurdz? Yes. Is that snot streaming from my nose? Don’t know. Can’t. Feel. Face. Do I still have a face?!? Don’t know that either. Just keep moving. Up and down the steps we go; a jumping jack over, some planking over there, shake your derriere. Holy s&%$, “-4 degrees, feels like -14 degrees”, for reals Weather.com app? Mother nature, please. “How low can you go?” Is that…the limbo song by the Chubby Checker?? You know you know who Chubby Checker is. Maybe Chubby Checker will come to Indy next week and we’ll have a #racingfit limbo competition, stay tuned…

Went to breakfast. Recruited the waiter. Were told we’re tougher than fishermen on the Bering Sea. Damn straight. Bring it, Mother Nature. We’re #weatherproof. Bailers, just show the fuck up. I will come pull you out of bed by your earlobes. That is why they call me the enforcer.”