It is LA marathon week! While we have a great crew racing this Sunday, I want to take today’s blog to give a special shout out. Rachel Goldstein and Molly Pearlman are two awesome people who, for the second year in a row, have taken up the mantle of Co-Captains for one of the official water stations of the marathon. 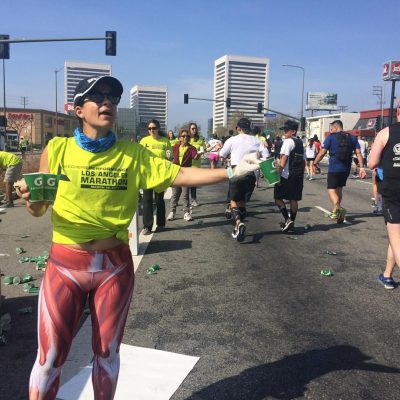 This year they were assigned mile 22, which in my opinion is one of the worst miles in a marathon. You’ve already been running for hours, but you can’t yet say “Woo just a 5k left”! I know in many of my own races, mile 22 has been a breaking point. (Ok let’s be honest, I breakdown waaay before 22…) Anyway, Rachel and Molly put in a ton of effort during last year’s marathon and were immediately asked if they would return for this year. Without any hesitation they were happy to accept the offer. For anyone that has run a race, you know how important a water station can be. Aside from providing water and electrolytes, these areas of respite are full of energy. Now add NP energy to the mix and you have one badass water station that doubles as a cheer station. 22 miles in and BOOM, all the high 5s, positivity, and spray paint fumes to make you forget about those powerful quads of yours that are cramping. Ok ok there won’t be actual fumes, but the first two will be out there in full force! 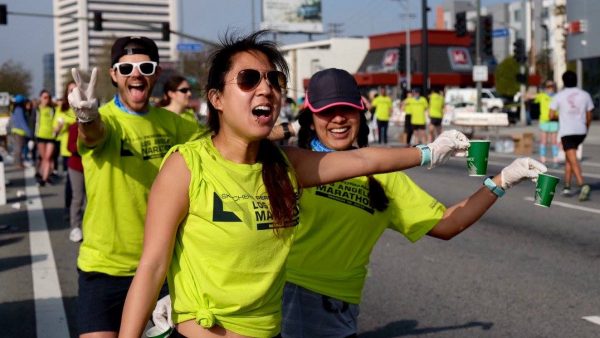 I also want to take a second to thank all of you who have signed up to volunteer at the water station. Yes, Rachel and Molly have organized the event, but it wouldn’t happen without those of you who have committed to helping. Don’t think for one second that yelling water for a few hours won’t have a huge impact on someone’s race. Your smile, your “you’ve got this”, your cold cup of water, your eye contact, any of these things could be exactly what a runner needs there at mile 22.

Marathon Expo Shakeout: We’ll be meeting at the convention center (Fig/Pico) at 11:30.  There will be an easy 2-3 mile route and then we’ll explore the expo together.  Even if you aren’t running on Sunday feel free to #justshowup and enjoy the experience of it all.

Battle of the Babysitters – Blog Post here for information!  Submissions through the end of March and we’ll be picking lucky folks for a couple of dates in May.

Factual facty fact – In 1996 the LA Marathon was the first major United States marathon to use chip timing in which runners times were measured by transponders and radio receivers.