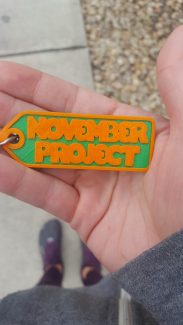 Hi!!! I’m Jamie and I’m honored to share my feelings about NOVEMBER PROJECT KELOWNA with you!!

I’m a small town ex-party-animal turned running-addict who goes to bed at 8pm (even on weekends) and who equates socializing with exercising. In August, I moved to Kelowna and had exactly two friends – my mother-in-law and an old friend’s sister who I barely know. LOL. I also had an Instagram friend (I’m a hard Instagrammer) who happens to be a NP Kelowna OG…@brit_chick! Also known as Helen!

But back up. I heard about NP in 2016 through a blogger named Kelly who’s all about encouraging people to do awesome shit and not be afraid. I was very intrigued and I get obsessed with shit easily, so I ordered the NOVEMBER PROJECT BOOK (did you even know about this???) and educated myself. I don’t think people buy this book. It took so long to arrive that the seller refunded me and then it showed up months later. Anyways, I was in love with November Project before even experiencing it!

While visiting my husband in Montreal for a work thing, I was sitting there on a Tuesday night and thought “Holy shit. Tomorrow is Wednesday.” I immediately Googled if Montreal had one of these Tribes and was in luck! I got up in the morning SO excited, but nervous and felt awkward going to this thing alone and not knowing anyone. Alas, I ran to Place Jacques-Cartier and up to a crowd of people and just tried to blend in, which didn’t work.

Strangers hugged and welcomed me and by the end of the Bounce I was overjoyed I’d gotten up early in a new city to check out this movement. The vibe was so good – extremely inclusive and authentic. My first partner’s name was Hugo and we were dippin’ on each other while wall-sitting like we’d been friends for years. Another of my partners whose name I can’t recall, he was like seventy and we jumped over/rolled under one another (in the intimate zone, for sure) without a care in the world. I feel like his name was probably Zeke. I was thinking the whole time, this is the shit! No wonder people love this! A crew of all fun people who aren’t weird about new people joining, and want to meet at 6:29am to have a sweaty morning party and love each other!?

In time I had the pleasure of putting forth Traverbals to both NP Seattle and Vancouver. My experiences at both were the same – a hot welcome for newbs, a wicked workout in a cool spot and new friends who like sweating, yelling and laughing. In Seattle, I raced the next day at the Tenacious Ten and there was a lady from NP SHRIEKING as I ran by “GO GIRL GO GIRL FUCK YEAH I KNOW YOU!!!” ahahaha!

In Vancouver, some of the guys piled me in a car for a ride to the SkyTrain after the workout. November Project is instant inclusivity. Immediate community. It’s like a macrophage except it doesn’t destroy you, it loves you forever.

Now, I’m in Kelowna for two years temporarily. I left my husband, family and friends and it’s hard to be away from my people and home. Sometimes I questioned how I’d meet people since I don’t “go out”. But on the very first Wednesday here I went to the Sails for 6:29. I’d planned on it for a year before arriving because I know what NP is about, and I found my IG friend Helen and we hugged the shit out of each other. The following week, at Knox, it was my first second time with any tribe, and I knew this was the crew I wanted to roll with during my time here in the Okanagan. Adi, special thank you <3

Wednesdays mornings are my favourite. It hasn’t even been six months but when I get to the Sails, I see my Kelowna people! A group of like-minded humans who are all GENUINELY fired up to see one another and be together before the day gets going. I don’t feel like a stranger in this city like I thought I might. I have a community. I have exactly 2 + LOTS of friends! and to this I say FUCK YEAH!