We had asked our friend, running partner, T-Rex yogi, Positivity recipient, Bytown Boy and a go-getter Stephen Bierbrier to share his experience, passion and outlook about November Project Ottawa and how he came to be part of this ever growing family.

Stephen we were overjoyed with excitement and jitters the first time we bounced alongside you.  Here’s to the many more times we get to hug, high five and bounce along with you. Thanks for sharing your story and here’s to bringing soles together. 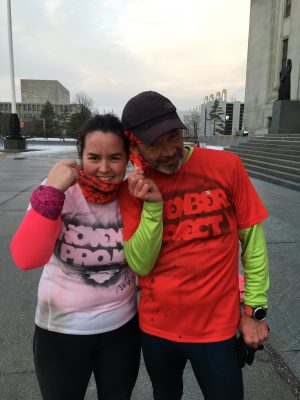 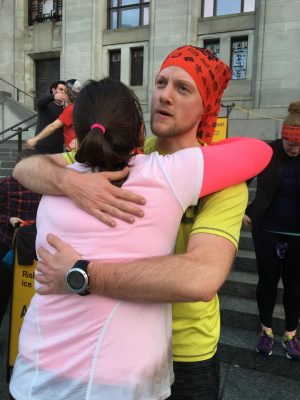 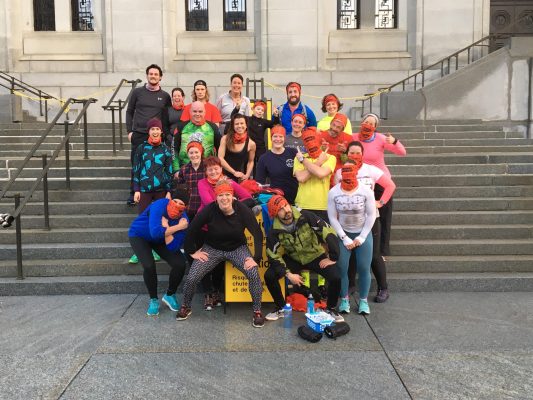 That was my introduction to November Project in Ottawa. Roughly 55 Wednesday workouts later, I am still showing up.

Why? Because it really is one of the highlights of my week and I had been craving for this nutty grassroots fitness movement since 2015. In fact, it was a Globe and Mail article where I first read about NP’s Andrew Ference post-trade to the Oilers bringing his fitness passion to the Edmonton community and that got me pumped. I read and read and read about this cooky bunch of fitness fools who were “showing up” and running the Commonwealth Stadium stairs at … gasp … 6am in darkness. I was like WTF, but I also thought “I wish we had that in Ottawa”.

Man, I wanted to be a part of that Edmonton community. I loved the concept of doing what THEY were doing. There were only a few issues:

A lot of magic (yes, I believe in magic) happened between reading the article and today. First, I quietly challenged myself in June 2016 to run every damn day for a month even though my last 2k was back in high school (I’m pretty sure that my kids think that dinosaurs roamed the earth back then). Then I started to find the time for run groups and free fitness events and I started posting about it all the time. And then … WORK IT YOW.

From the first moment that my running shoes hit the Wednesday snow in January 2017 to the last moment that my skates touched the ice in February 2018, this has just been an unbelievably wild November Project ride for me and the whole Ottawa community. I’ve never received and given so many smiles, high fives, “you got this, you got this, you got this” words of encouragement, fist pumps, funny faces, and hugs (with consent, of course) before 7am. November Project is a drug and NP Ottawa co-leaders Liz and Lauren are the weekly fitness dealers. It really is addictive. It’s as simple as that.

This is a passion project. I love being Ottawa’s fitness cheerleader rallying the YOW troops out of bed for an NP workout. I’ve posted piles of social media about NP. I’ve filmed and posted ME talking about NP and thought “where has the introvert gone?”. People see me and say “uh oh, here comes Stephen pumped up to talk about NP”. No, really. I went on a first date in spring 2017 and was told months later that the whole date sounded like a recruiting event. Yeah, we’re not dating.

In a little over one year, I’ve heard ALL the excuses. Too bad. Just show up. You’ll love it!

What is NP to me?

It’s the little moments locked in forever. It’s capturing YOW’s first positivity award (a bedazzled blue Frisbee) before we actually had THE positivity award. It’s working out with 3 or 183 people who WANT to be there. It’s running with NP co-founder Bojan around Parliament Hill bursting with excitement once Lauren said to me “you know who that is, right?”. It’s bringing a Star Wars Stormtrooper mask to a workout just because somebody agreed to show up IF it was there. It’s running stairs. It’s running hills. It’s running through snowstorms. It’s NPers from around the globe just showing up for the workout because they are in town. It’s learning how to pose for “serious face”. It’s working out in -30c (plus a windchill) and laughing. It’s meeting up with NP Montreal for a workout and beers. It’s roadtrippin’ to Boston for 6ummit and not sleeping for 3 days. It’s meeting all these incredible people locally and globally who I would have never met but for NP. It’s making a difference in someone’s life with just a smile. It’s giving back to the community. It’s having trouble sleeping the night before a workout out of absolute sheer excitement. It’s seeing a grassroots gear shirt at a race and shouting “November Project!”. It’s running the Harvard Stadium stairs beaming from ear to ear. It’s waking up downtown Ottawa  with NP energy. It’s recruiting total strangers near Parliament Hill  at 6:25am. It’s twisting your ankle at a North Face Endurance Challenge and finishing the race because that’s just what you do, right? It’s remembering someone’s name, shouting it out at the next workout and watching them smile. It’s gushing with pride seeing my 3 kids participate in their first NP workout. It’s getting my first shirt tagged. It’s getting my 33rd shirt tag. It’s hug club. It’s putting on the NP buff. It’s watching Lauren and Liz grow into the amazing YOW leaders that they are. It’s being honoured to lead 2 NP workouts in the summer (no fatalities, no one quit). It’s watching NP Youtube videos over and over and over. It’s meeting like-minded people. It’s making connections. It’s smiling when people say that “it sounds like a cult”, and responding “pretty much, … but a fun fitness cult”. It’s being gassed on PR days. It’s about FOMO every week. It’s the NP support during my first half marathon. It’s getting to go to summer camp every week as an adult. It’s being goofy. It’s about that moment when you learn just a little bit more about the complete stranger standing next to you. It’s the bounce. It’s knowing that this fitness movement is BIG and that it is only going to get bigger. It’s knowing that I’m a part of something real, authentic and linked to my core values of humanity and community.

I consider this my tribe. My tribe in fitness and my tribe in life. They’ve got my back and I’ve got theirs. Through the good and the not so good, NP is the constant. It has literally brought me the only smile of my week on several occasions. THAT IS PRETTY FUCKING POWERFUL.

Thank you so fucking much NP. I heart you. Big.

March 3rd: Join us for a morning run and then hop in the bus to the Canadian Blood Services to donate Blood.  Run will be from 8-9am. Want to join let Lauren or Liz know!

Are you jealous of everyone’s BUFFS? You should be!  Get em while there hot and $5 next week.