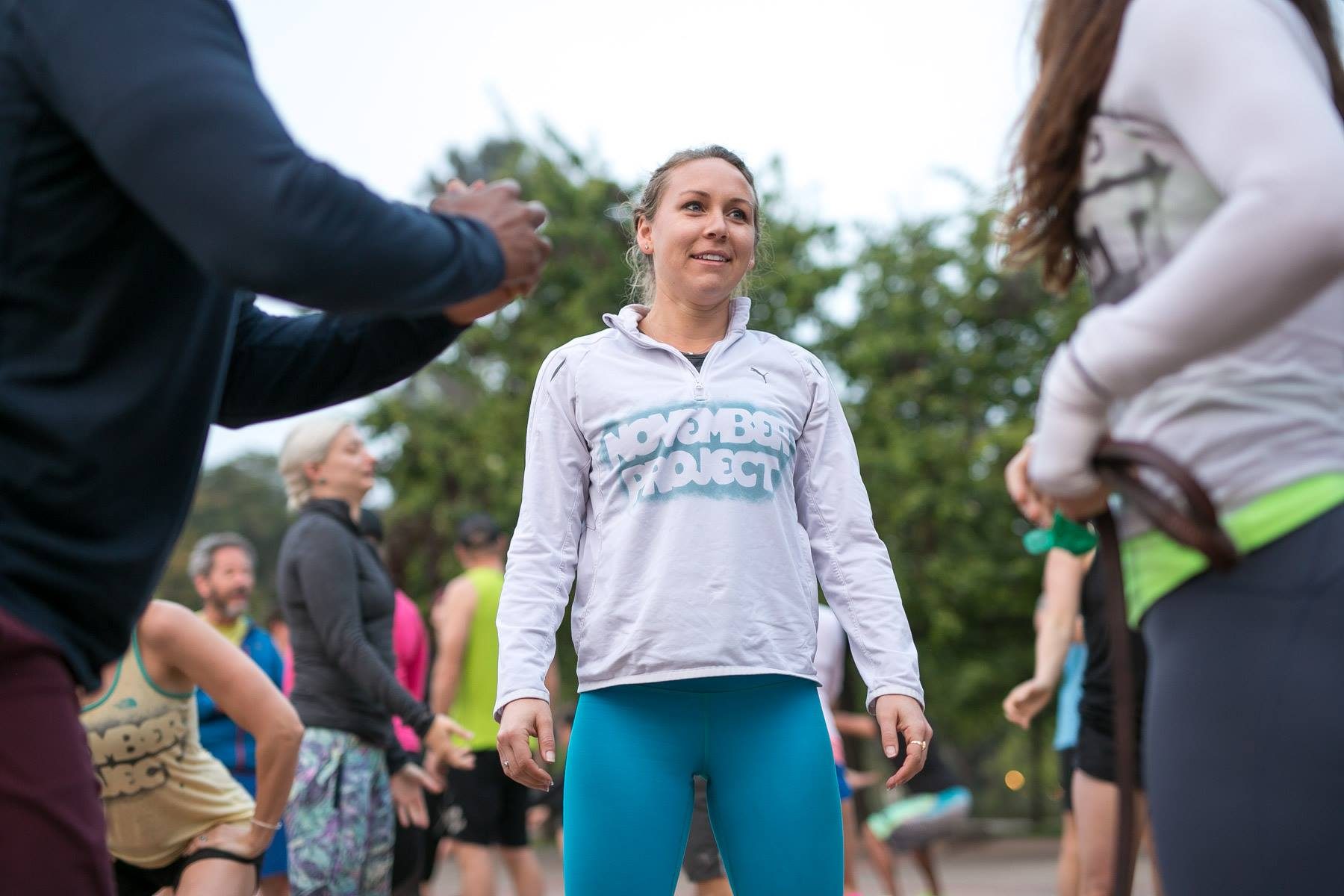 6.5 years. 2 home tribes. 10 traverbals. 1 positivity award. That’s the footnotes version of my November Project story. The long version is full of too many memories to even keep my own mother interested.  So when I was asked to write a guest blog post I knew I’d have to find a way to keep at least some of you around until the end.  And since story telling is not my forte… I’m taking it back to middle school outlines…

THE BEGINNING:  Just Show Up.

Technically, my first day of showing up wasn’t my first workout.  I was living in Boston at the time and had read a tweet by Andrew Ference that he was going to be at some workout at Harvard’s stadium.  Being overly conscious of the ‘puck slut’ stigma I didn’t want to show up just because a professional hockey player would be there.  BUT, I was already planning on swimming with the masters team at Harvard that Wednesday, so on my way out, I figured… why not just take a peek?  I looked in at the gates next to section 37 and I’m 95% sure I said out loud…. “Fuck yeah, I’ll be back for this.”  And that’s where it all began.

I was all in.  But was I?  I showed up every Wednesday and Friday but still made excuses why Monday’s were just too hard to get to.  I’d smile, hug strangers and love it, but then put in my headphones for the workout so I didn’t have to REALLY engage with anyone.  I wasn’t there to make friends or be social, I was there to get my ass kicked.  I remember there was something BG and Bojan would call “section 1 social club”?  or something like that?  Who really knows because I never had to guts to walk over and find out.  I’d peace-out right after the work out telling myself I needed to get to work.  When the first summit was announced I asked myself “Who in their right mind would PAY to go on a trip to RUN with STRANGERS?!”.  I was in to it, but I wasn’t really IN it.

THE MIDDLE:  The Power and Authenticity Behind this Community

The first time a really FELT how much this group of people really believed in the community they were promoting came after a traverbal to Calgary. I was there to watch a hockey game and in the middle of marathon training so I made sure my travel plans allowed for me to make it to the local NP workout. It was a freakishly cold March and the day after day light savings started so there were only a dozen or so people at the workout. I mentioned to the tribe members there that I was visiting from Boston to watch a hockey game but my friend and I were gunna spend the day dog sledding up in the mountains.  Not much more was said except a little trash talk on who was going to win the game that night.

Fast forward to a few days later when Capozzi (Boston Co-Leader who at the time I’d had maybe 2 conversations with) sent me a message on Facebook,  “YOOOO Anna! Tammara told me that you checked out the Calgary tribe this week!  Just wanted to check in with you, there’s news that 2 Bostonians possibly with NP were missing in an avalanche.   Want to make sure you’re okay!!”  Now, at the time I was going through a lot of personal/life/work shit and the fact that these two almost strangers paid enough attention to me AND my story AND went out of their way to check in on me BLEW MY MIND.  That, to me, was all the proof I needed that what the leaders and members of these tribes preach is real.  They are here to build a real community, they are here to make real connections and THIS SHIT IS GOOD.

THE NOW (Hopefully there will be no End):  All In

It’s a really weird feeling when you move back “home” to a place you haven’t lived in over ten years.  You meet people and are like “Hey! I’m new here, but I’m from here, but I have no friends cause I haven’t lived here in years, but it’s not because i’m weird I swear!!!… BE MY FRIEND?!?!”

Day one at NPSD, I made the decision to leave my headphones behind.  I knew if I was going to actually meet new people, I would have to make sure I didn’t have that crutch.  And I knew that I would have to get a little uncomfortable in the hopes that people here might actually want to make new friends.  I had the mindset of ‘Say Yes’ any time I was invited anywhere.  It started small, I joined the social page, then stuck around for coffee, then the Kelp Kabobs Tri. And as I got more comfortable, it became easier to ‘Say Yes’ to more things.  I went up to San Francisco for the ECSCA even though I ended up being too injured to run (Yep… I PAYED to go on a trip to RUN with STRANGERS.  foot->mouth).  I didn’t overthink things and I just made the jump.  And now, I can finally say I’m ALL IN.

I found my people, my friends, my family.  People who will greet you with the biggest hug possible just because.  People who get up at 5 am on a Saturday to go run trails for 4 hours.  People who go to the desert to run/camp/party all night (but not after quiet hours).  People who are positive!  People who can turn the lows of a canceled race into an epic weekend just the same.  People who are willing to TRY anything and DO anything for their friends.  And I can tell you that every awkward moment was worth it to get to a place were I now feel surrounded by people who truly care.  Where every Mon/Wed I’m hugging friends, not strangers.  And even better… being in a place where I can be completely comfortable being me.

My favorite thing about November Project is that it’s always there for you in whatever form you need it to be.  It doesn’t matter if you’re the slowest or the fastest, in the best or worst shape of your life, the happiest you’ve ever been or going through a heartbreaking loss, there just for free fitness or friends or family.  Everyone belongs and that’s not just a gimmick they tell you to get you to try it out.  But, don’t be surprise, if the reason you decided to show up, isn’t the reason you decide to keep coming back.