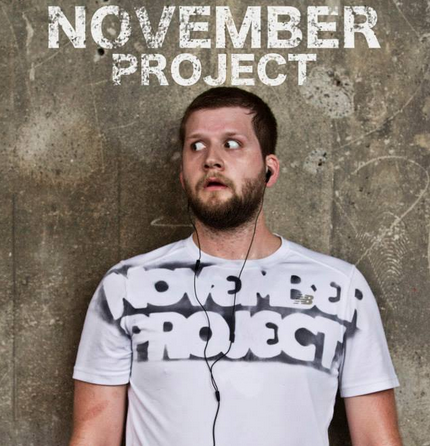 2014 Birthday Yearbook Photos will take place at the workout on Wednesday, November 5th, 2014, in all 16 November Project cities. Will you be there?

Listen up world! We need your help, your butt in action, and your participation. One of our most successful days at November Project this summer in 17 cities was when we snapped our official Yearbook Photos. Once we posted these collections into our respective Facebook albums we essentially had our names-to-faces guide to the tribe. Now, we need to make a huge effort and we need all hands on deck as 2014 comes to a close. But instead of talking about the “close” let’s speak of the “open”…

November 1st 2014 will mark the 3 year mark for the very first day that two dudes in Boston began a thing that they called “November Project.” The story has been told over the years but this year we will celebrate in style. Our 2014 Fall Yearbook Photos will be a “Birthday Theme” for all that show up. Now, this could mean a range of things: birthday clown, dress like 3 year old kids, cakes, sweet 16, golden birthday, birthday suit (be careful Flashman), and whatever other wild ideas you may land on between now and then. We will have a few basic paper bday hats in case you come dressed as a November Project member who is there to workout without the frills.

Here in Boston this past summer we had just over 700 photos snapped that day and plan to beat that number with these Birthday Yearbook Photos. Our recruiting goal remains 1,000 total, Which drives the final point of this post…

We still haven’t hit our collective goal of having 3,014 people on a Wednesday morning in our combined 16 cities (when we hit this our Co-Leaders will be getting November Project tattoos to commemorate). As the cold and dark months sweep most of the cities we train in we need to act. Use this Birthday Yearbook Photos as a recruiting opportunity. Use your connections and your Twitter heavy-hitters, and your mayors, and your networks. We need them all! Because, as you KNOW… THIS SHIT IS… OK, I got a little distracted there. Maybe your recruits are looking for a new profile photo, or a way to connect via FB with the entire album of tribe members in the city, or to help the Co-Leaders hit there goal to end up with branded NP tattoos (as promised), or just to be another amazing human being who wants to aim at the seemingly impossible “3014 people in all of our cities combined on a Wednesday in 16 cities.” For whatever reason you use to get them there… let’s get them there. All hands on deck, call in favors, get annoying, and build this tribe 3,014 members strong in one workout!

2014 Birthday Yearbook Photos will take place at the workout on Wednesday, November 5th, 2014.

The challenge has be laid down for all of you. Let’s get our collective asses in gear.