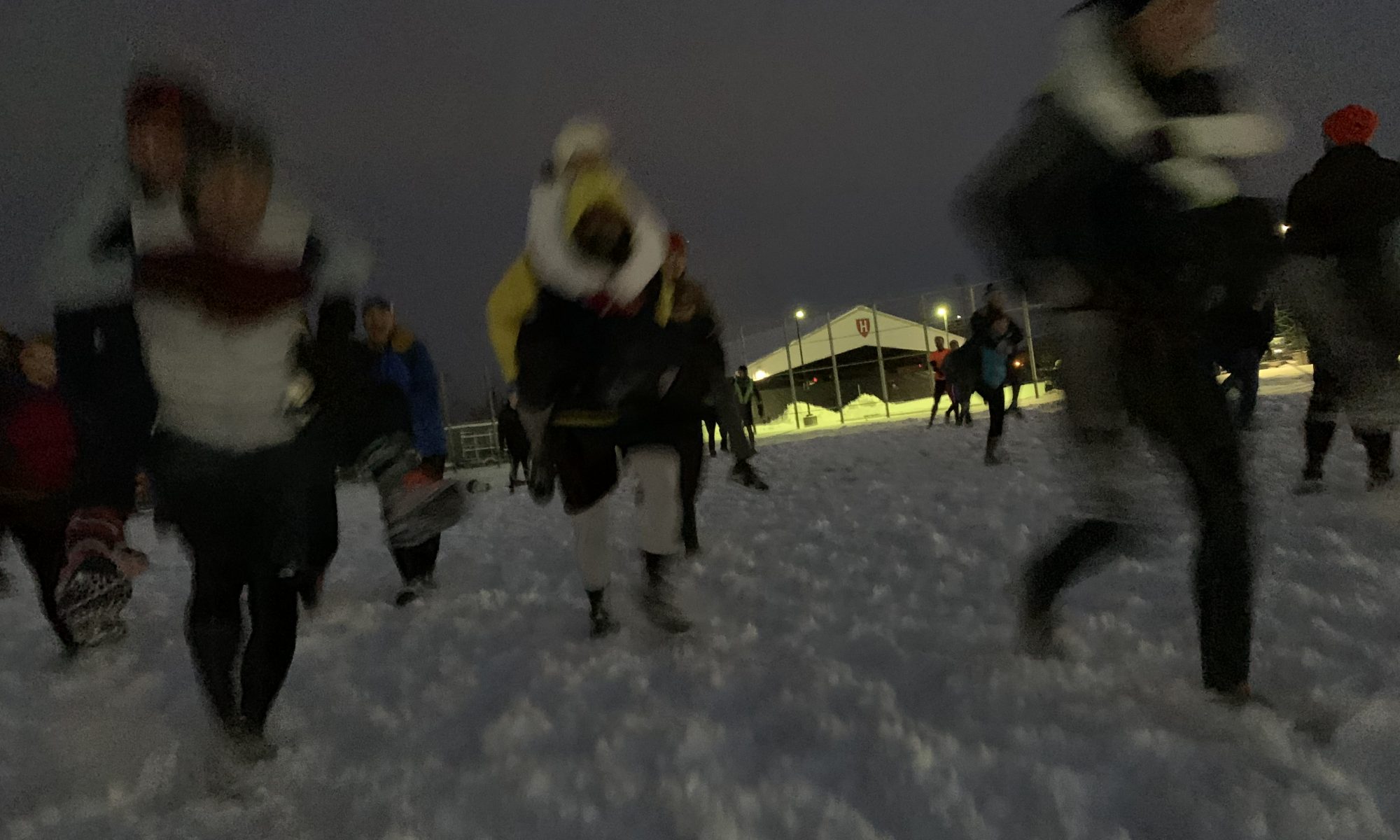 Congratulations, you made it to winter. Which technically happens upon some day on the calendar, but I usually say when there’s snow and ice on the ground, it’s officially winter. And despite our best attempts to clear the stadium (THANK YOU #SHOVELCREW), we cleared all the way down to the dangerous and still-not-going-anywhere ice layer that is likely to be melted down by sunshine and some (hopefully) warmer temperatures this next week, but this morning the stadium was still a death-trap of ice.

Which brings NP to its own state of winter–the Wednesday morning not on the stairs, but instead in some creative, fun, wonderland of winter workout.

This morning we made our way into the beautifully pristine field of snow surrounded by the outdoor track at Harvard. And while our lungs and legs didn’t burn from the intensity of the sections of stairs, we found our fitness through sprints out and back through the ankle-deep snow, through the rounds and rounds of burpees, through the alternating squat reps and squat holds, and through tag. Snow tag. Snow freeze tag that was more fun than you ever remember tag being as kids. Tag where you slipped and slide-ed and didn’t care when you fell down because it was in a field of snow. Tag where when you get tagged, you do jumping jacks in place (also hard to do in deep snow), until someone crawls on their hands and knees under you, and then you both get back in the game. Tag where you completely forget that you’re in the middle of a workout because you’re having so much fun, and then when you go “back” to the workout, it’s even better than before, because you’re still smiling from those couple games of Tag you just played.

It’s a little crazy, and it’s so much fun.

Where else in this winter-y wonderland of a city can you have this much fun, instead of obsessing over how cold/icy/snowy/slushy/dirty/wintery everything is?? I think that’s the magic of NP, especially on those winter Wednesdays. Sure, we all love the stadium, it’s why we keep showing up to it week after week. But on the days when we get to throw out the usual for the snow workout, those are the ones we remember. Those are the ones where you met that person who became your NP friend. Those are the workouts where you realize how hard it is to move in snow and instead of being sore from stairs you’re sore in every other way, and you love it. The moments of piggy-backing, three-legged-racing, partner/team challenges that don’t matter at all, yet they mean everything. Those are the wintery Wednesday workouts when, no matter how you feel about snow and winter, you walk away feeling happier, more alive, and more grateful for whatever the hell just happened, than you could have imagined.

We expect that with the good grace of Mother Nature and the outstanding efforts of the #shovelcrew from last night, that next Wed we’ll return triumphantly to the stadium. And until our next winter Wednesday in the snow or somewhere besides those amazing stadium stairs, we can all appreciate how good it feels to be up & awake, outside in the world, and embracing fun movement–no matter what. Winter and all. NP makes it feel a lot more exciting to move for fitness, rather than a daunting pain-in-the-ass.

Friday we meet at the top of Summit Ave. at 6:29am to run some hills.

Monday we will meet at Medal of Honor Park, in Southie, at 6:29am for all the fun we can have during our #destinationdeck workout. We encourage everyone to get there however you need to, knowing that running/biking/walking/etc. to get to & from the workout just means extra fitness for free! And if you need to drive, you can always drive to the spot and get some movement on your own before and/or after the workout too. It’s like a bonus!

remember to bring/wear gloves or mittens on Mondays. We will almost always be putting our hands on the ground for some fitness movement, so make sure you protect your hands during the winter weather months!

Winter WOahMAN Series: Next stop…December: The next WOahMAN of the series will be next Friday, Dec. 13th. Get ready, it’s happening!! More info about WOahMAN here.