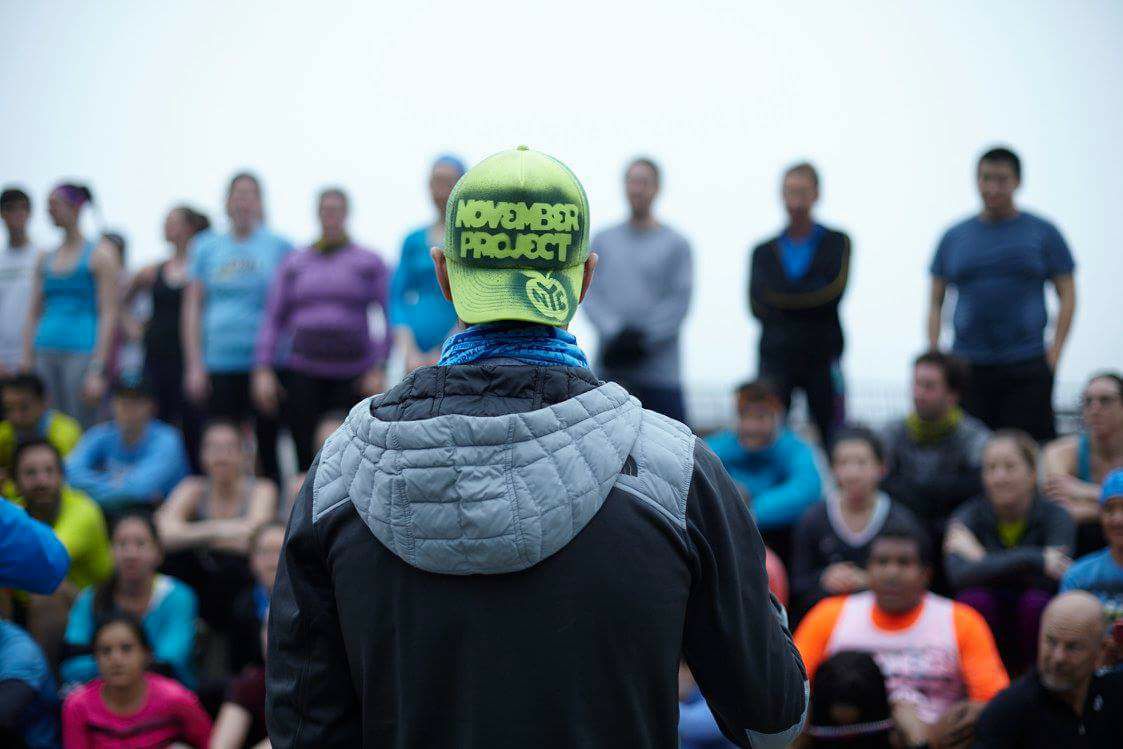 This blog isn’t easy to write because, in many ways, it is the end of an era. It was one that was extremely colorful, full of great humans, and a time that I’ll never forget. And although I’m the one holding the pen, I’ve cleared all these words with Bojan and Laura and I can assure you they’re on the same page. The official relationship between November Project and The North Face has come to an end. The shift comes with the most respect, love, and full transparency from The North Face. This is technically a breakup, but there were no hard feelings or less than positive chapters in our story – just a clean end of an era.

Accepting help wasn’t an easy thing for Bojan and I to do back in 2014. Up until this point, November Project had been a grassroots movement which prided itself on not needing a large company to run or grow. We made the rules. But after 3 years of spreading faster than we could manage, we needed assistance – what we needed was a partner. And on our quest to find the right partner we learned that our biggest struggle was with the way brands needed to market. What we saw in the world of run/train was brands standing in front of their athletes, their run crews as opposed to supporting from the side. Call it pride,  call it ignorance, but we wanted to maintain the grassroots feel of NP and we weren’t going to settle for less. The non-corporate feel of our workouts felt authentic to our cities with a genuine sincerity from the leaders which to this day is difficult to replicate.  So in 2014, in an event surrounding the Endurance Challenge Wisconsin, we hosted NPSUMMIT 2.0, rallied around the motto “Never Stop Exploring”, and revelled in a partnership newly born. The North Face made gear for being outdoors, we were always outdoors. The trail series gave us something to train for, the NPSUMMIT gave us something to look forward to, and the partnership respectfully supported us from the side, not blocking us from the front. Between Katie Ramage, Lisa Burns, and Todd Spaletto, we received assistance from The North Face to keep aiming for World Takeover. We needed help and fuck, we got even more than we knew what to do with.

From January 2015 through March 31st 2019, the NP Movement has grown into 49 tribes. We have hosted 5 NPSUMMITs, were able to join 3 TNF Athlete Summits, and been given the resources to bring gear to co-leaders, bounce with tribes around the globe, and be there to celebrate new cities at their very first workout. All of this while working side by side with the team at The North Face to achieve their goals in the domain of run/train. In case this blog is your first introduction to November Project, it is important to know that NP won’t ever be canceling workouts for extreme conditions. In fact, the more intense the conditions, the more vivid the memories. With an outdoor brand literally on our backs, we pushed on into the cold, dark months. New runners were born, new co-leaders rotated in, cities popped up all over the map, the book dropped, the film followed, and we just kept plugging away. Four and a half years can fly by when you’re on a mission.

So I’ll close with this: we have an exciting new chapter ahead. November Project will go on to do epic things and so will The North Face. These years will always be meaningful and powerful and unforgettable. Let’s close this chapter the only way that makes sense, with an intention to remember these times and to #NeverStopExploring.

One Reply to “The North Face Chapter Closes / Thank You for 4.5 Years of World Takeover & Exploring”