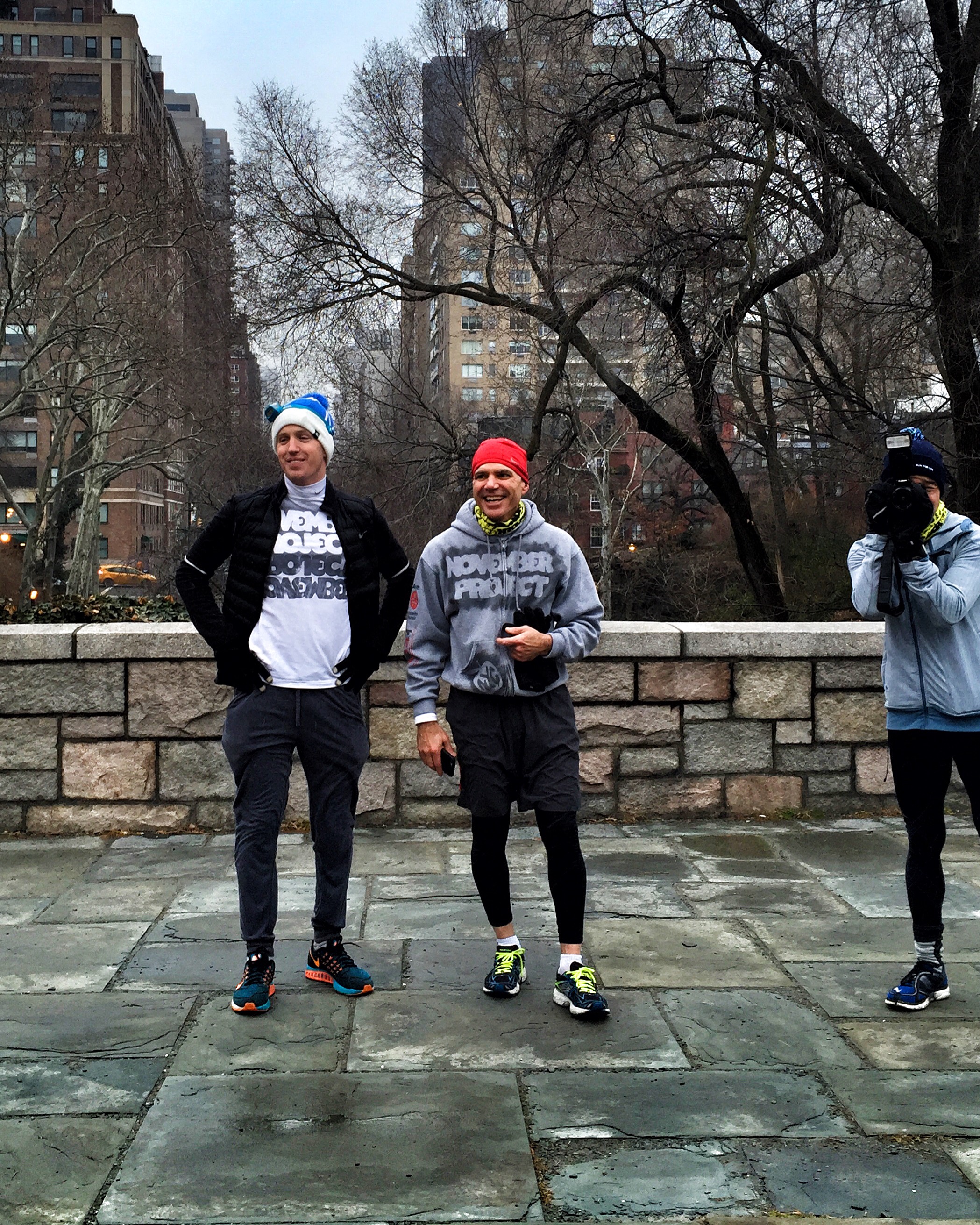 When our “fearless” leaders heard a cold front was coming through NYC, they packed their bags and headed to the West Coast leaving its two toughest members who do not F around even when they are F’ing around, to babysit this Wednesday (or at least that’s how we imagined they settled on us)

It started with a random text from John Honerkamp asking if we were going to NP on Wednesday. Next came the ask like he needed a big favor. We’ll tell you what the big favor is. It is the awesome experience that comes with being chosen to lead a November Project workout.

The theme was National Umbrella Day (it is a real thing, look it up). Also known as “brolly” for proper English speaking folk and “bumbershoot” for those from the late-1800s, we could pretend that we picked this theme because an umbrella symbolizes November Project at its finest – a constant force in one’s life there to help you weather any storm, regardless of who you are. But in reality, we just wanted to listen to Rihanna for two hours.

Poetic inspiration came from Ali on the Run who gave a lesson last week about Poet’s Walk in Central park. First timers Sarah and Catherine FAF FIT(as in Fashion Institute) cross-country teammates(who knew?) , Mike (AKA Magic Mike for the striptease) and Sebastian had to find rhymes for their names. Poor Sebastian!

“ One rolled over to the other and said”!

The rest is up to your imagination leaders.

We were expecting snow and wanted to stay away from the stairs so Jason ran his ideas past “Be Like Beaney” and got the green light. We wanted the workout to be safe and were a bit crushed when Jeannie sustained a leg injury. Turns out the cause was her own exuberance and not a design flaw.

The workout out was simple – start in the middle, run north or south as a team, and return to the middle. After each leg, the team needed to complete one exercise to earn letters which spelled UMBRELLA: pUshups, Mountain climbers, Burpees, Rihanna-inspired dips, stEp-ups, Lunges, pLanks and skAters.

After each leg, the team would run the other direction. The first team to spell the word umbrella won an “umbrella” (although everyone won because we got to listen to Rihanna).

Lew’s playlist only has 2005-2007 hip hop , country & western(his two favorites), and a few Bruce songs. There was one Rhianna song but of course not Umbrella so he was left wondering if NP will reimburse the $1.29? Regardless, we rocked the Grotto.

The 5:28 crew was all business. We started on time, enough said. The tribe vibe was sheer positivity with Robert McCombs being an incredible group leader and they allowed us to work out some of the kinks in advance of the larger 6:28 invasion.

Well maybe it was the extra hour of sleep or perhaps the improved elocution of the Babysitters but 6:28 took to the workout like water to an umbrella. It was smooth sailing with maximum effort from the tribe and minimum stress for us.

We want to give a special shout out to Brian Hsia. Brian’s commitment to NP is second to none and much of the time he willingly forgoes the workout in order to take awesome pics of the NYC tribe. Brian – thank you for being out there today (again).

Weatherproof Weatherford put us out to his huge audience and we are now all good.

Friday’s workout: Madison Square Park. Meet by the fountain in the middle (near the Shake Shack).