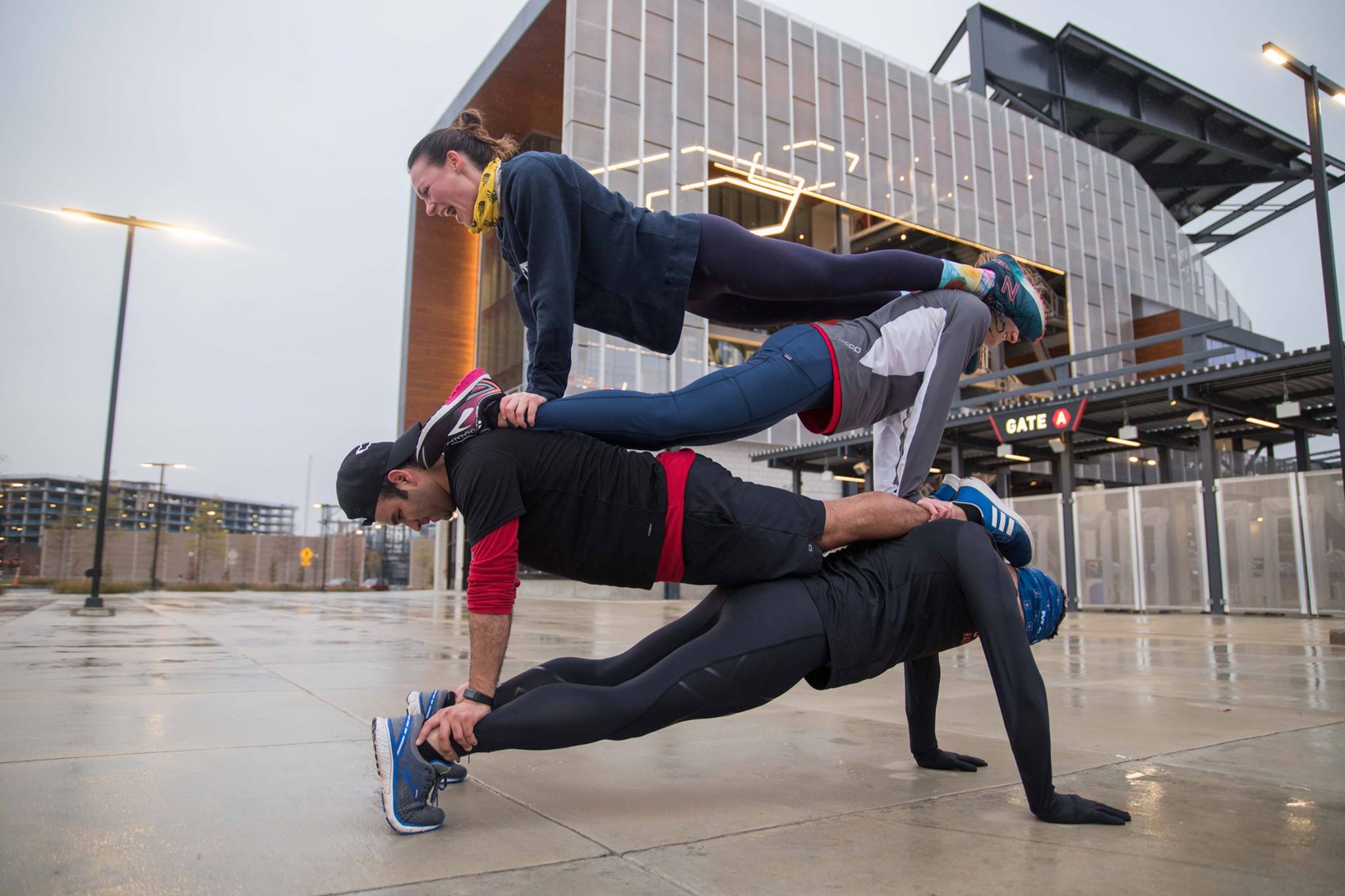 Yes, that is not a typo. In the days leading up to last month, a challenge was posted to the November Project universe — Abvember. The premise was pretty simple: challenge yourself to do at least 10 minutes of planking one day, 10 sets of 10 push-ups the next day, and then 10 sets of 10 crunches the following day. And then repeat the rotation 10 times throughout the month’s 30 days (or however many days you could).

Of course it involved a Google Sheet, because what doesn’t involve a Google Sheet these days? And just as important, that sheet had TABS that calculated — using a formula that some of us understood, and many did not — leaderboards for November Project communities and for individuals.

“At first, I was just going to do the daily goal,” Ron said, mentioning that he had been running so much (a shocker in the NP world!!) that he had neglected such things as hundreds of daily push-ups and crunches.

But then, Ron, who lives west of Baltimore and wakes at 3:50am to take a train to DC for NP workouts, noticed those Google Sheet tabs.

“It was all downhill after they added the individual goal tab,” Ron said, “because I am very competitive when it comes to things I know I have a chance of winning.”

Ron’s competitive desire did two things — it helped stoke an incredible three-man race for the top spot between him, Tom Barry of Madison, WI, and Mat Duffy of Malaysia. It also motivated the hell out of the rest of the NPDC group, all three leaders included, to be our best selves and do as many days of planking, push-up-ing and crunching as possible (all told, 17 group members did all 30 days).

All of a sudden, Ron’s November days were structured around Abvember. He would max out his mornings at NP (break in the action? Do 10 push-ups), take work breaks twice an hour for exercise, and then once he returned home via the 1-hour, 40-minute commute, he would drive his family nuts with evenings dominated by Abvember.

“Throughout the day, I stuck to an every 30 minutes do one minute of whatever exercise there was for the day (routine),” Ron said, “then when I got home it was go, go, go until I couldn’t keep my eyes open and get enough sleep to wake up at 3:50am to start the cycle again.”

(I’m not sure I’ve done that many during four years of NP!)

TWENTY-FIVE THOUSAND CRUNCHES IN A DAY

To take on what Ron was doing during November isn’t just insane; it takes an ABsurd amount of dedication and discipline. Those traits have been evident in Ron since he began coming to NPDC workouts in 2017 on the recommendation of his supervisor, Ken Keck (also an NP regular). Ron had transitioned from running his own design and construction company, a job where he was on his feet constantly, to an office job. He didn’t feel as fit and needed a new physical activity routine.

Thus began the 3:50am alarms and the long train rides into DC. In the beginning, Ron had a hard time making it to workouts on time, but soon he had the timing figured out and became a constant presence at workouts. He started running and running more, too. Not surprisingly, he made some really good friends, as well.

“NP is self-esteem I have never had before,” Ron said. “NP means pushing myself to my limits to see where they are and pushing to get past them. NP has made me a runner. NP means friendships that now feel like family.”

The three-man race went back and forth. Ron kept pushing … up. Literally.

“The banter between the three of us was a blast,” Ron said. “I feel like I have a couple best friends now that I have never met in person. We really pushed each other to one-up the next. I will have to admit it got a little insane.”

Yet this was far from just about Ron Batcher. Somehow, someway, Ron found the time in between crunches to rally on his DC team. He wrote words of encouragement almost every day in the open spreadsheet cells next to people’s totals, giving them kudos for for their planks, push-ups and crunches. Where were all these words of wisdom coming from, I wondered at the time. Could this be another Google Sheet formula? I should’ve known.

His message on Nov. 29 was simple. In each row next to each name he wrote, “And you’re awesome.”

Thanks to Ron’s leadership, NPDC engaged in an epic battle with NP Chicago that came down to the final minutes. Think Lakers-Celtics, Yankees-Red Sox, Caps-Pens, name a rivalry. This competition was HEATED. While many (like me) didn’t understand the scoring formula, Ron encouraged every last person to the finish line. Chicago ultimately was declared champions by Abvember HQ, but there was no head-hanging in DC.

Ron found a way to outduel Barry and Duffy and keep his sanity, finishing the month having done the following:

So when November finally concluded, the clock striking midnight last Friday, how did Ron feel?

“Fantastic,” he said. “Better than ever, literally.”