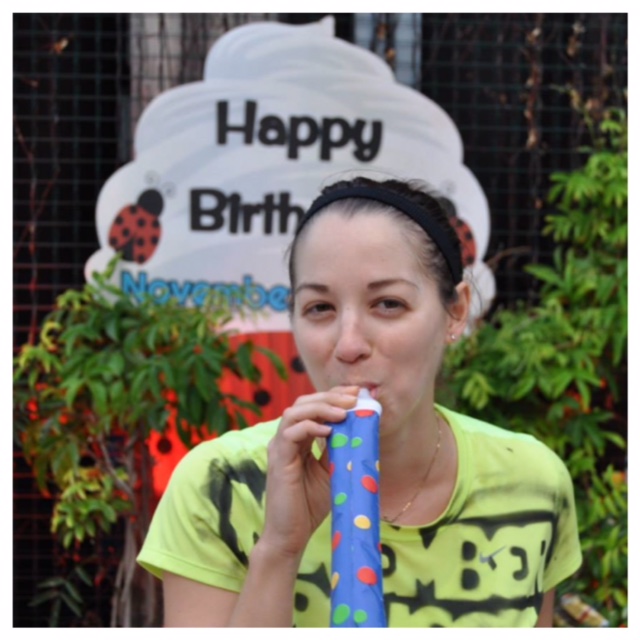 This months guest blog and member spotlight is brought to you by NPNO Tribe member Frannie!

I think we can all agree that 2014 was a big year.  Maybe not for the Saints…or any of our other sports teams come to think of it…but 2014 brought us all here….waking up before dawn on Wednesday mornings, ready to hug (and sweat) it out after hearing what the tribe leaders have in store for us that day.

With 2015 right around the corner, I can’t help but think about goals. In the last two years, my goals have gone from “walking without a limp” to “running a half marathon the day before running a marathon” (aka, the Goofy Challenge in Disney World).

In the fall of 2012, I was in the midst of training for the 2013 Goofy Challenge, when I fell off my triathlon bike (yes, it’s as lame as it sounds) in Audubon park, breaking my ankle in three places.  Two days later, an Orthopaedist put me back together, using a stainless steel plate and 13 screws.  Although he was optimistic about my future running career, I had a sinking feeling that my days of physical activity were numbered.  Several medical professionals (who shall remain nameless) told me that my running days and, more importantly, my marathon days were over.  To any runner, especially one in the midst of training for her fourth marathon, the news was devastating.

As 2013 approached, I had one goal: regain the ability to walk without a limp (and never, ever take that for granted again!).  After months of using crutches, a walking boot, and watching my leg muscles atrophy much too quickly (sadly, they’re still not the same size), I decided not to let the words “don’t” and “can’t” stop me from doing something that I love. (Plus, I could only defer my Goofy registration for one year, so I didn’t really have a choice.) At that point, I created a second goal for 2013: return to running and start training for marathon number 4.

After getting off to a rather painful start (no surprise there), the ankle pain slowly subsided, and eventually gave way to (mostly) pain-free runs. This time last year, I remember feeling anxious and nervous about the big day, mostly wondering and worrying about whether my ankle would survive 39.3 miles of running in 2 days. On the day of the marathon, I remember thinking, “well…this should be interesting.”

Approaching the race with a different, much more appreciative attitude about running, the Goofy Challenge turned out to be the best race of my life.  I expected to hit the wall and suffer brutal knee pain around miles 18-22, as I had in my last 3 marathons, bit I was delightfully surprised that miles 18-26.2 came and went without any such problems.  In fact, it was my first pain-free marathon. As it turns out, the ankle injury forced me to cross-train much more than I had in the past, which forced me to strengthen the muscles around my knees that usually lie dormant during marathon season.

A few months later, after coming down from my runner’s high, I was surprised and elated to find out that the November Project, this crazy “grassroots workout” thing (whatever that meant) that I had read about in an issue of Runner’s World, had somehow made its way to New Orleans.  I didn’t know what to expect, but I knew it was definitely something I that I wanted to be part of.

I’m fairly certain that I spent most of that first workout short of breath, and in awe of those who weren’t. So much for that runner’s high! Despite feeling a bit out of shape (it was my off-season, after all), I loved the group dynamic of the workout. Everyone griping about how early it was, hot fricken hot it was, and how tough the stairs were, but also motivating other people to keep going and just push through whatever we were feeling to make it to 6:45, aka group picture time.  I had never felt so embraced (literally and figuratively) by a group of total strangers before. I was instantly hooked.

Although I have a bad habit of using the metal ankle as an excuse for not sprinting or going all-out on some of the exercises we do, November Project has definitely made me a stronger person, inside and out.  On the outside, it forced me to do things like burpees, bear crawls up the Superdome ramp, and something called a hoistee (sp?), which I would never do on my own. But, more importantly, it forced me to go beyond my comfort zone and talk to at least one, if not more, complete stranger every week.  I’m usually shy until you get to know me (aren’t we all?), but that goes right out the window the minute one of the tribe leaders asks “You good?” and people start screaming out “F*ck yeah!” before diving into the day’s workout.  Needless to say, I feel like I could pretty much go anywhere by myself and make a new friend, which is pretty amazing for someone who normally feels weird just making eye contact with someone for too long.  I’ve met so many amazing, warm and friendly people at NP that I’m sure would never have crossed my path out in the real world. While some were just passing through and I may never see again, many have become those friendly faces that I love seeing every week.

I recently ran into a few NP regulars when I was out having dinner, and we exchanged that look that says “I don’t know you’re name, but I know you’re cool because I’ve seen you at NP” (don’t act like you’ve never done that).  I’ll admit, it was weird the first time I saw Preston and his wife shopping at Rouses, in non-NP apparel, but it was also really cool.  I love knowing that I am part of this awesome little community that is full of people with various goals, talents and accomplishments, many of which are much more interesting than mine.  And I love that this community is continuing to grow and expand, bringing even more interesting people into my life each week.

One of the best NP experiences I’ve had thus far was meeting some of the NP-NYC folks who ran the New York Marathon in November.  One of their tribe leaders, John Honerkamp (who, as it turns out, is kind of a big deal…literally http://www.nytimes.com/2014/11/02/sports/new-york-marathon-2014-coach-train-900-runners-often-never-meeting-them.html?_r=0) contacted me on facebook and totally hooked me up for the pre-race, never-ending, sitting around portion of the marathon. He introduced me to a big group of people from the NP-NYC group and I was completely overwhelmed by their friendliness and hospitality (hey, they’re northerners after all). They offered me blankets, extra clothing, and I basically owe my life to the girl who gave me her extra hand warmers, which kept my hands toasty until I got back to my hotel that night. Although most of them were much, much faster than me (yes, I’m talking to you Mr. “I’m in the first wave…under three hours…no big deal” Guy), they were all so warm and welcoming that I wanted to stay and be part of the NP-NYC tribe just to get to know them better. [I also later found out that one of the girls I met is also kind of a big deal…. I guess that’s how they roll in NYC

On top of all of the cool people I’ve met here, I’ve seen the physical benefits of NP take shape in my life. After breaking my ankle, my attitude toward running and working out has been “just do what you can do and be thankful for what you can do.” However, after becoming a November Project regular in June, I have set more Personal Records than I have in the 5 years that I’ve been running.  In October, I set a new half marathon PR at the Gulf Coast Half Marathon, trimming two minutes off of my first, and fastest, half marathon time from 2010.  In November, when the Big Easy Running Festival was downgraded from a half marathon to a 10k (and with the help/push of fellow NP-goer George Clark), I set a new PR under the one hour mark, knocking about 4 minutes off my fastest 10k time. Most shocking of all, though, in December, I signed up for one last half marathon in 2014, and managed to set a new PR for my 5k ,10k, and half marathon times. I don’t know what happened, but I cut about a minute off of my 5k and 10k times, and somehow shaved a solid 5 minutes off of my half marathon time.  The only explanation I can think of is this: stairs. Lots and lots of stairs.

So here’s to 2015, and all the new, crazy, tough, workouts that Kate, Cameron, Preston and Will decide to throw our way.  Personally, I’m looking forward to some stairs-lots and lots of stairs.