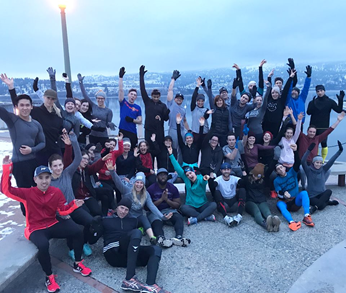 So. November Project. It can mean so little. It definitely meant nothing to me when I was first told about it. But it can also mean SO MUCH. It means more than almost anything to me now.

My first NP was on February 7th this year. That’s crazy to me because it feels like it’s been forever since I started going. Anyway. When I asked my friend, Leah, the night before if she wanted to go to the gym that next Wednesday morning she said that she had something she was doing in Kelowna at that time and that actually I should definitely come with her. We live in Vernon so I remember first thinking “What on earth do you have to do at 5:30 in the morning on a Wednesday in KELOWNA.” Closely followed by “Sure, why not, I’ll come.” I had learned to trust Leah’s crazy plans.

That was one of the best decisions I’ve made. We drove down early the next morning and met this crazy bunch of weirdos who circled around us and shouted our names and bounced around. We were the only newbies that morning which made it that much more memorable. I remember after the workout I was on an energy high for at least an hour.

I’ve learned over the past year, through NP and the other fun activities I do, that the right answer is usually yes. If someone asks you if you want to do something, you don’t come up with an excuse as to why you can’t, you just say yes. You make a plan and you do the thing. From 5am hikes to workouts in the cold, in the rain, in the snow, in the SUN to days jam-packed with running, biking, swimming, whatever else you can think of: yes is always the right answer. I used to say no a lot and be a generally negative person so trust me when I say yes is a much better answer. Positivity and saying yes. That’s all you need. The community you’ll gain from just that is mind blowing. I could go on and on about November Project and where I was and where I am now but really, I should probably save some of it for future blog posts.

November Project is there rain or shine (SNOW or shine, #weatherproof), to make all your bad days good and your good days great and your great days FANTASTIC. I don’t think I can actually express what it’s like so it’s probably best that if you’re reading this and you haven’t gone (or maybe it’s been a while since you’ve gone) you should definitely #justshowup at the Sails downtown Kelowna on Wednesday morning in time for our 6:29am bounce.