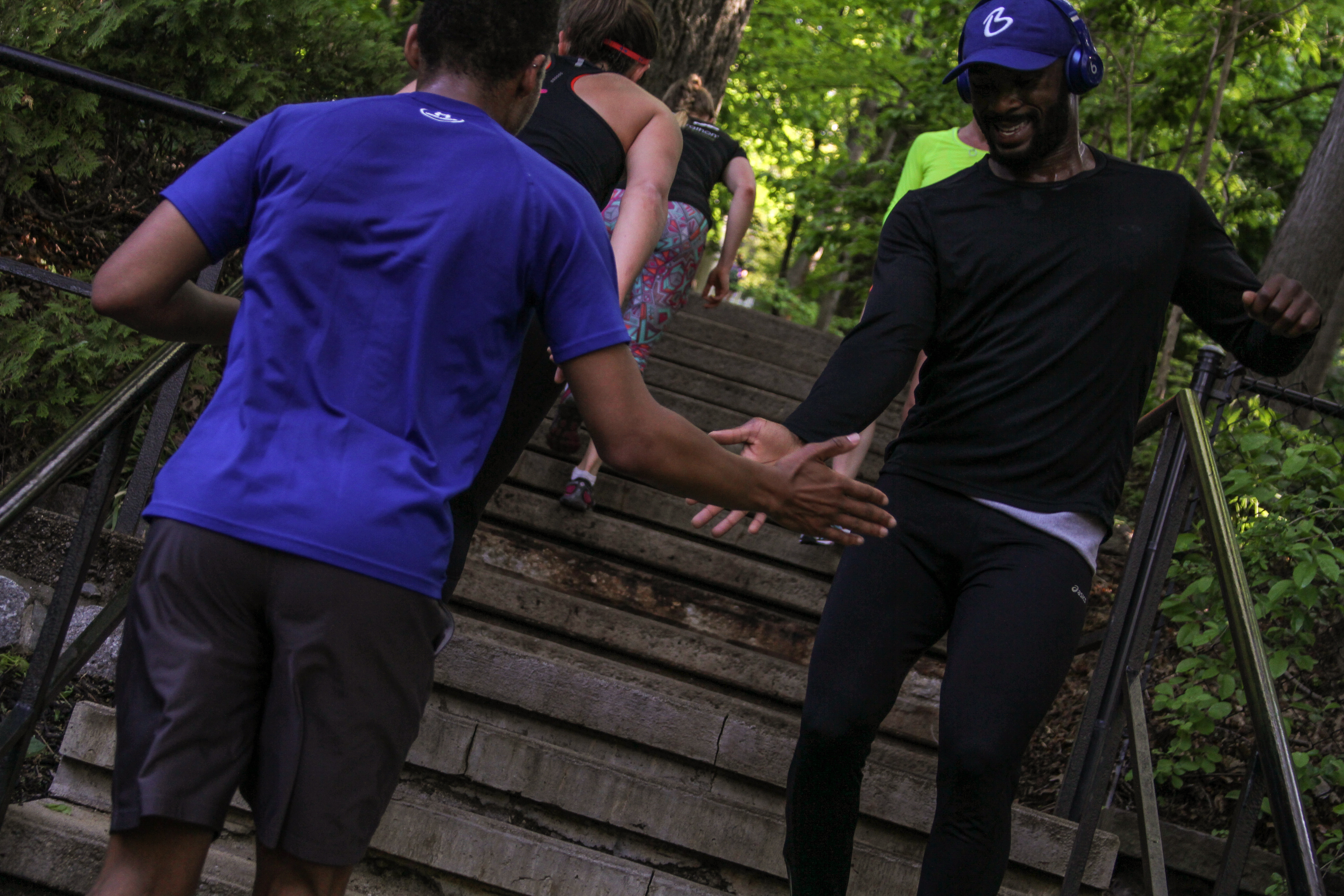 My third official NP workout was a Friday.  It was November of 2013 and Summit Ave was very much the same as it is today.  The thing that stood out the most to me, aside from the weird, culty things that we did in the bounce and the hugs with people who were still strangers, was the pregnant woman also running up and down that giant hill with me.  And when I say pregnant, I mean like 38 weeks pregnant.  The first thought I had was, “That woman is my hero.”  I saw her strength and was amazed with her athleticism, and I couldn’t get over how freaking positive she was. Sure, I loved the badass things she did, but I admired who she was and how she decided to be in the world.  At 7:05am on the dot, she’d start calling out people’s names running the hills.  She was encouraging and motivating, and she seemed to be motivated by each and every one of the people she excitedly supported.  Just a couple of weeks later, it was on Summit Ave where she was running (and walking) with the Tribe, when her water broke and she had her beautiful son August.  Just to be clear, she had the baby in the hospital, but the water breaking was on the hill.  I didn’t get to have a conversation with Jess directly until she returned to NP workouts.  And the first chance I had, I tracked her down at the stadium and told her exactly what I thought the first time I saw her: “You are my hero.”  She was humble…as she always is.  And she was as sweet and kind as I imagined her to be (maybe even more so).  I fell in love with the tribe in a new way that day.  Yes, a friendship began, and I also began to see NP as a place that cultivates amazing people who infuse the world around them with the feeling of joy, excitement, possibility and fun.  As BG described her in a guest blog a long time ago, She has a look in her eye at all times that says, “I’m having the most fun.”  When you’re around Jess, you want to have the most fun too.

So, I want three things to be very clear from this blog:

Step 1. In the next week, go to at least one workout and seek out someone you don’t know.  (a partner for DD, that person you always end up near during your stadium tour, or even someone new at the hills).

Important Step 4. (I like to call this the “Jess step”) Post a little something on that person’s page that lets them and the rest of the world know that you see their awesome.  It’s as simple as that.  Tag #NP_Homework

Jess changes the world just by being in it.  If we follow her lead, we’ll take over the world with this free fitness community in no time.  Let’s get closer, hug more, share our excitement, and embrace the opportunities to build up the people around us.

The Tribe is Strong.

MONDAY DESTINATION DECK: is on Ipswich St. underneath the Charlesgate bridge, otherwise known to Pedicab drivers of Boston as the Circus Bridge.  Verbal and get the exact location in the tracker here.

PR Wednesday: Remember to bring your race face on Wednesday, it’s the last Wed of the month so we’re racing 37 sections for PRs.  #RecruitEveryone #RaceEverything

*Jess’s badass legacy includes WAY more than just just having a baby while doing burpees at the top of Summit Ave.  Things like receiving the Positivity Award, completing 100 sections at the stadium, wearing every costume ever suggested, attending those epic run/social events of the earliest days of NP, knowing more people’s names than anyone ever, doing solo workouts and posting about them to NP every week while working all summer at Camp Hawkeye in NH, running tons of races, and giving out all the hugs.  Just like she has the most fun…she gives out all the hugs.