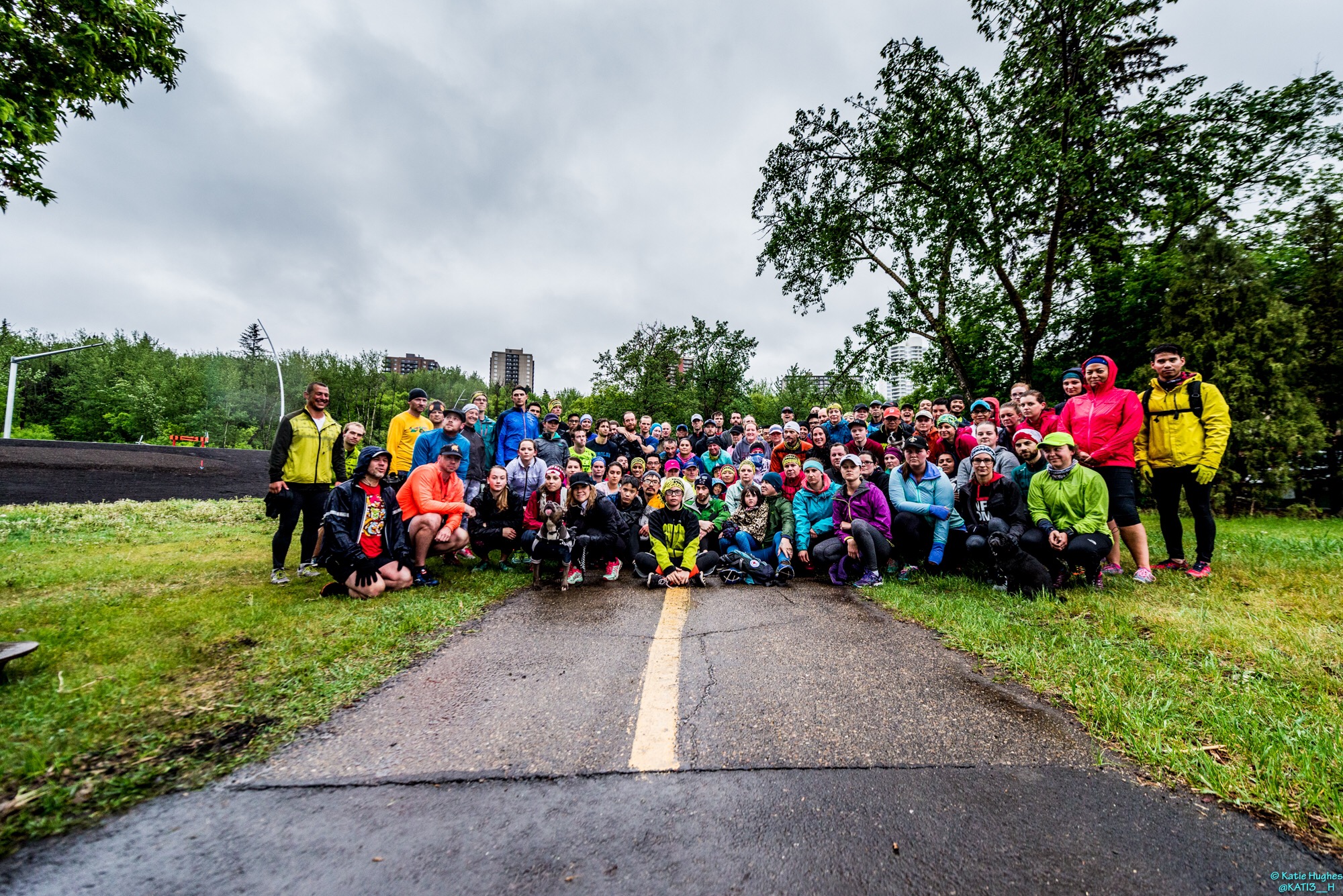 When we started November Project in Edmonton almost 3 years ago, Jen, Andrew and I each got to pick one “everything but”. What does this mean? It means that as leaders we will be at the workouts no matter what the reason. We’ll be there in -30, blizzard, bears, lightning…  everything but________. If your “everything but” (EB) happens, then you get a pass. Our everything buts have to be extraordinary circumstances.  For example, -30C is not considered an extraordinary circumstance because it happens fairly often (most years). We implemented this because we wanted to make sure that we keep our sanity and get a mental break when these things happen. It’s probably for the better as we would be absolutely miserable people to be around if we were at our EB days. With some weird stroke of luck, two EBs fell on the same day…. today…

I’m not sure if I’m supposed to share these with everyone, but here they are:
Jen – Wet & Cold. You’re probably thinking that this isn’t exactly an extraordinary circumstance. But when it’s raining and below 5C, Jen will not show up. Think back to any rainy day that we have had that was below 5C. Jen was not there. We have actually had very few of these days in the past 3 years, so it actually is an extraordinary circumstance.
Andrew – Smoke. This is a weird one because it has nothing to do with his breathing, although that’s a serious issue. The smoke actually harms his Acai crops and he has to tend to them so that he has enough to last him the winter. Apparently, the best time to tend to them is early in the morning.
Me – Tornado. I refuse to run in a tornado. I am somewhat confident that I could dodge the flying debris, but spinning in a circle while being off the ground is very frightening to me. Some of those tornadoes go hundreds of feet in the air. The elevation combined with the spin would be bad news and probably throw me off for the rest of the day.
While there is a remote chance that all of these EBs happen on the same day, it hasn’t happened yet and we have no plan in place if it ever does.
I absolutely love seeing people show up in less than ideal conditions. You can just see their drive and determination they have. Nothing is getting in their way. Or it shows that they don’t have a weather app. Either way.. I love it.
Announcements
Monday’s workout is going to be at the Fort Edmonton Footbridge (meet at the Fort Edmonton side). The workout will be a bit different than usual and will be a bit longer than usual. Recommended route is to park at Fort Edmonton park and head down the path to the footbridge (1.6km). However you get there, make sure you are at the bridge by 6am.
Also, if you have a mat, (yoga, workout, door, etc), bring it. We’ll bring a few extras for those that don’t have one.
Find the Good,
Nadim
Share via socials: