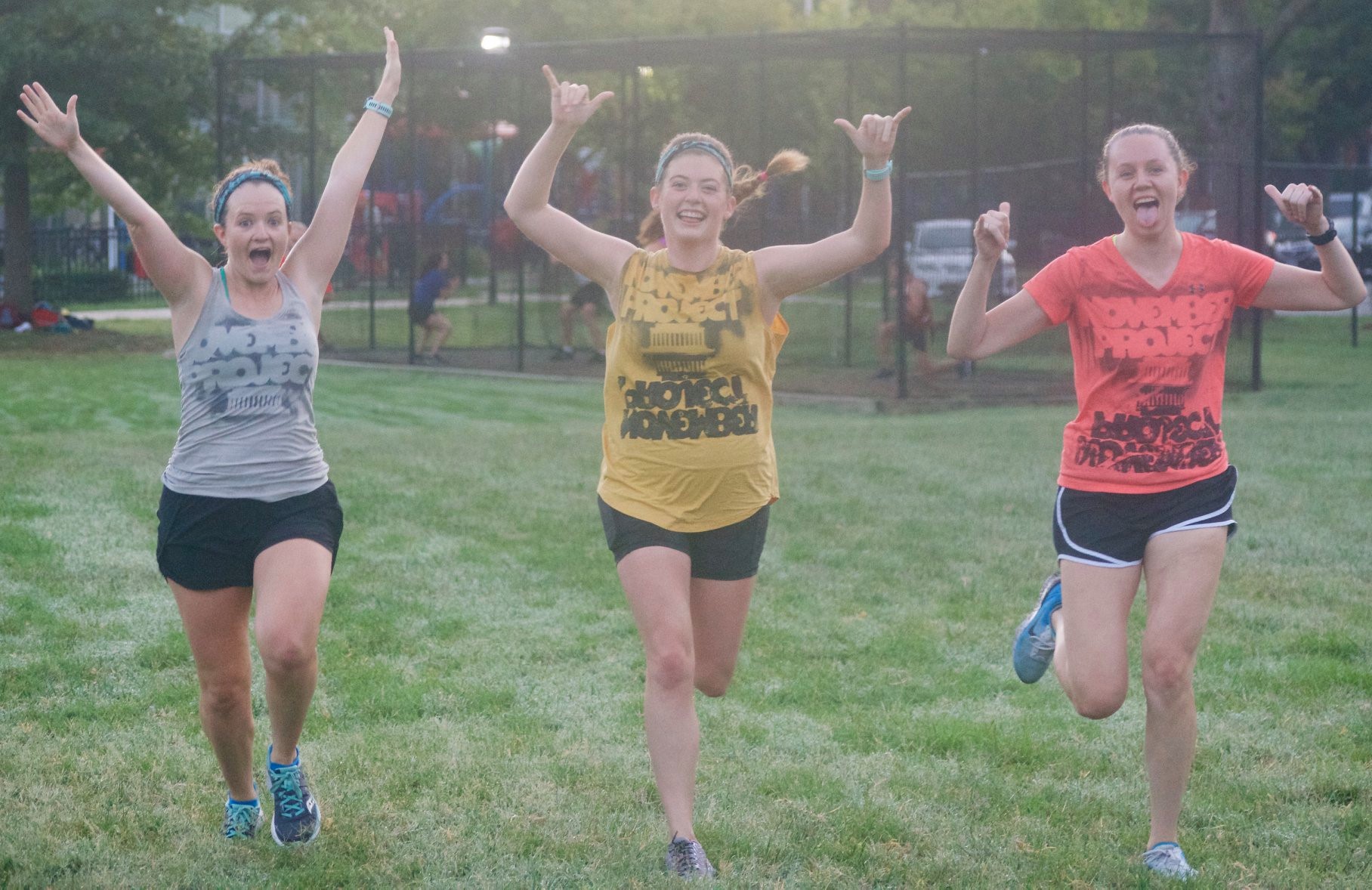 Yesterday, we surprised Carrie Clowney outside of her building — as she returned from a morning bike ride — with the Positivity Award in a socially distanced presentation. Big thanks to Austin MacDougall for doing the behind-the-scenes work to help us plan it and film it. Carrie has been a consistent force of good during quarantine in the NPDC world. She brings positive vibes to the daily Zoom plank + coffee calls, she’s delivered baked goods to friends, she’s connected with NP folks from other cities and more. This award is long overdue! Enough from us, though. Hear from/get to know Carrie below.

How does it feel to be the first NPDC quarantine recipient of the Positivity Award?
I feel honored! I think we’ve done a great job of finding ways to stay connected with NP through quarantine – virtual workouts, virtual coffee, virtual happy hours – so it seems fitting that we bring back one of the last parts of NP that hasn’t gone virtual, the Positivity Award! I think Mary (Finkebone) stated it nicely on Facebook, we need the Positivity Award more than ever now that we are physically separated from each other.

Be honest — did you see it coming, or did the surprise get ya?
Oh I was surprised. And confused. Very confused. Austin reached out a few days ago to coordinate a scone drop-off (he makes some great scones). I had been out riding with Blake and happened to notice Dazzo’s bun (you can spot that thing a block away) as I pulled up to my apartment. It seemed odd to me that the three of you were in front of my apartment and that Austin happened to be filming the entire thing, but I didn’t think too much of it. When Dazzo began talking about the positivity award, I assumed that I had intruded on you recording the virtual handing off of the award to someone else. I almost walked away! It took a few minutes to have it sink in as to what was actually going on. I don’t think it has fully sunk in yet.

How, when and where were you introduced to November Project?
Emma Yourd and I used to work for the same international development firm in Bethesda. She talked non-stop about this workout group and was constantly trying to recruit the junior staff to join her for a workout. The December 2, 2016, workout happened to be right next to my apartment so I had no excuse not to show up. Emma took me under her wing and made it her goal to make sure I had a good time and got to know the group. Even after my first workout Emma took it upon herself to keep me engaged and wanting to come back week after week. I would not be here today if it weren’t for Emma.

What do you remember about your first workout or thinking at/after your first workout?
Did they really just make us run the 13th Street hill over and over again? Can it be Monday already so that I can go to another workout? How is it possible to feel this good at 7:30 in the morning? I felt energized and ready to take on my day in a way I hadn’t felt before. 3.5 years later and I still leave every workout feeling the same way.

What does winning the Positivity Award mean and represent to you, especially during this pandemic?
Everything. I know a lot of us have been struggling during quarantine — emotionally, financially, etc. I felt okay at the beginning by staying busy with studying, moving, and deluding myself into thinking that it wasn’t too different of an experience from being back in Afghanistan stuck on a compound. As time continued to pass and it became evident that this wasn’t going to be a 1-2 month change in lifestyle, I finally broke down. For anyone who’s ever had a breakdown before, you’re probably aware that whatever precipitated the breakdown doesn’t necessarily become the focus of the breakdown. Something I’ve always struggled with is coming to terms with what type of impact I’m having on the world around me. This anxiety reared its ugly head during this time. The thing that managed to pull me out of my funk was being told that I was making an impact by being a consistent presence on the Zoom (coffee and plank) call and checking in on folks during quarantine. I brushed it off at the time as a platitude being used to (successfully) get me out of my head. Receiving the Positivity Award validated this for me. It’s really easy to think that you aren’t making a difference, but don’t underestimate how much you can do for others by just showing up .

Two-part question here: What have you missed most about November Project during this now fourth-month COVID-19 absence? And how have you tried to fill the void?
Having participated in November Project for quite some time, I have a few friends that I don’t get to see as often now as I did when I first started coming to November Project. People’s schedules change, they move farther away from workouts, life happens. I love seeing a friend at a workout that I haven’t seen in months and being able to easily slide into their running pace and do a hill with them or a Lincoln Log and hear about what’s going on with their life. The sheer joy when you see that person is something that just can’t be replicated virtually. I also miss Friday workouts. There’s something just so carefree about Friday workouts — the (mis)adventures associated with runpools to the workout, the different equipment that is built into the workout, and of course post-workout coffee.

The daily Plankathon/Coffee Zoom call (7am M-F and 12p S+S) has been a game changer for me during quarantine. I’m sure a lot of people would agree that it has been incredibly difficult to stay in touch with friends over the past few months, not out of a lack of desire to but more out of not having the energy to put into socializing. Everything feels more difficult to do during quarantine. Having something that you don’t have to plan, a low-effort socialization if you will, has been a blessing. It’s helped me stay connected with my fellow members and stay motivated to keep working out. They were with me when I finished the LSAT back in June, and they were also there for me when I received my results. I’d be remiss to not mention Morgan’s daily text messages encouraging me to get out and run. There have been many days where I haven’t wanted to get out of bed and I probably wouldn’t have without those messages. I’ve also started to go on more bike rides with NP friends which has been a lot of fun!

You were a leader both vocally and by example during the QuaranTeam Challenge in May. What did that experience mean to you?
There was just something so incredibly energetic about Team Jake. If you’ve ever participated in Abvember, you know there are members of our group that love throwing down a large number of reps. When the initial list of teams came out, there was a lot of buzz around the other teams and their superstars. I knew that I would never be able to individually compete against one of them, but if I could knock out enough reps to help balance out some of theirs, it might help my team out. I decided to post about #OperationNullify on the Team Jake Facebook page. From there it took on a life of its own.
I think by the end of the competition the team was more interested in supporting each other than actually winning. The Power 40s (Zoom calls) became as much of a social opportunity as a time to try to knock out reps. It just felt so good to know that I was part of a team again, that people were counting on me, and that I was counting on my team members.  I also enjoyed seeing everyone grow from week to week. We all entered the competition at different time commitment and fitness levels. Everyone set different goals for themselves each week and managed to beat them. I was just as energized by seeing Meredith crush a new goal each week as I was to possibly win. It truly felt like a team effort! Shoutout to everyone on Team Jake, including our fearless leader, for the month of inspirational memes!

What’s something you’ve taken up during quarantine that was on the backburner before?
I studied for the LSAT. That’s not really a fun answer, but it took up A LOT of my time.  Since that wrapped up I’ve been able to catch up on a lot of reading. I just wrapped up White Fragility and am planning to start The Inheritance of Loss. a book that Emma just sent me! I dabbled with some bread baking but I realized that I don’t have the patience for that.

Describe for us your favorite November Project moment to date.
Two years ago I somehow talked about 10 people into dressing like Austin for the Halloween-themed workout. I will never forget shotgunning La Croixs at 7:15 in the morning in front of the Lincoln Memorial. Second favorite memory is definitely from NP Summit 7 in Las Vegas. Kesha performed at the post-5k concert. During her song “Take it Off,” she encouraged folks to throw her clothing. Someone threw a tagged (NP) shirt on stage and she paused, looked at the shirt, nodded in approval, and then kept going.

What’s your favorite running or biking route in the DC area that you’ll share with us!?
There’s a running joke about the “Carrie route” that a few folks in the U Street/Columbia Heights area have adopted. For anyone looking to run a roughly 3-mile loop I highly recommend the 16th Street => Columbia => Calvert => Connecticut => Florida or T street loop. Not too many stoplights and the hills are manageable. I ran some version of that route 2-3 times per week for four years when I lived in the area. Now that I’m living closer to the Mall I’ve been enjoying spending quality time with Abe without the fear of burpees for the ‘gram.

What’s something positive that has come out of the past four months?
Do I have to limit it to just one thing? There are so many puppies in my neighborhood now! 95% of my runs are interrupted so that I can stop and talk to a dog owner, but mainly play with their dog. There’s a bernese mountain dog puppy in my building that I’m obsessed with, as well as a toy aussie that goes on walks along my run route. I’ve also gotten to know folks from other November Project cities that I wouldn’t have connected with as well if it weren’t for the move to virtual social gatherings. Marvin from NP Philly and George from NP NYC have become honorary NPDC members over the past few months. There’s a grassroots movement underway to convince Marvin to move to DC.

You’re stranded on a desert island and you can only have one kitchen appliance with you – what is it?
My Keurig! Shout out to Hannah Sedgwick for the wonderful going-away present that happened to come with the reusable pods so that I can drink as much La Colombe coffee as my heart desires.