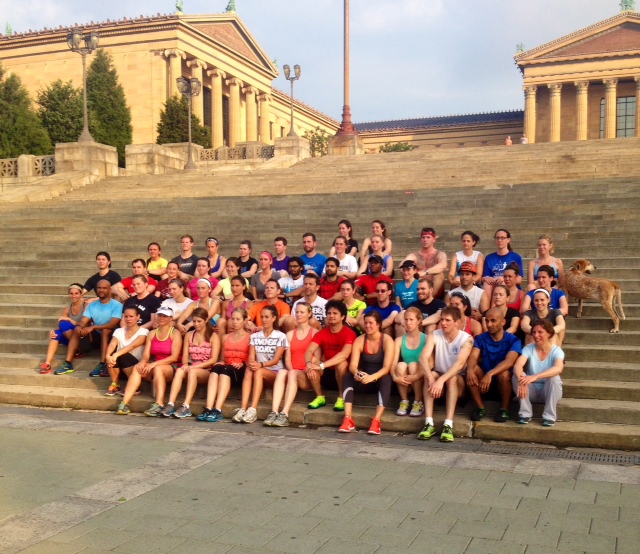 When you fall asleep on Tuesday night and the weather predicts chilly rain for the entire next day, do you (A) not bother to set your alarm and say, “I can sleep through November Project tomorrow” or (B) set that jammy jam anyway and jump up with glee knowing you’re going to start your day off right with a bunch of your fave peoples? If you chose B last night, then you were in for a super dope surprise of sunshine and hot sweaty bodies running amok at The PMA this morning! Good work!

It’s PR day here in the PHL so we warmed up with a one mile jog and sprinted that same course for our personal records. The new Timer Spreadsheet – Spreadsheet Timer which is neither a “spreadsheet” or a “timer” but which will “extrapolate your data into a graph” at some time in the future (maybe) is up and running, and you can record your super-fast times here. Large shout out to Keith Ives of NP_DC for the creation and sharing of this radical effort.

Drew took the Hard-Hat on some grand adventures last week, including his sister’s wedding. But it was time for him to bid the Hat adieu. He passed it along to Mike, who came to us after our first ever Run and Recruit evening event in which we partnered with the Fishtown Beer Runners (of which Mike is a member). Mike hasn’t missed a workout since that fateful first meeting, and he certainly works hard. We’re suspicious that he shows up just to see who sweats more — him or Drew. Be well with the Hat this week Mike. Have fun!

#Bmore_Bmore is this Saturday – check it out!

Next week is Philly Beer Week, so we have naturally partnered with our good friends at Southern Tier Brewing Company for #hopsandhugs coming at ya next Wednesday morning – same time, same place! Bring a gently used pair of running shoes (in honor of National Running Day), we’ll donate them to Project Home (because they deserve it), and you will leave with a refreshing Southern Tier brew (because you rule)!

Have a super amazing week! See you folks next Wednesday! The Tribe is strong!