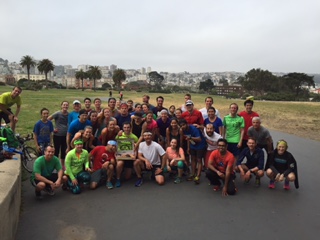 This  morning NPSF threw down where we throw down every Monday morning; at Fort Mason. In lieu of more entertaining post today (and possibly because I’m so burnt out from CFA studying that I am out of jokes) I’ll be sharing text directly from the Fort Mason Wikipedia page to remind us that the green space we have the privilege of working out on every week once served a very real purpose in defending our country. We appreciate the sacrifices of our veterans and their families.

“Fort Mason, once known as San Francisco Port of Embarkation, US Army, in San Francisco, California, is a former United States Army post located in the northern Marina District, alongside San Francisco Bay. Fort Mason served as an Army post for more than 100 years, initially as a coastal defense site and subsequently as a military port facility. During World War II, it was the principal port for the Pacific campaign.

Today it is part of the Golden Gate National Recreation Areaand the site of several cultural facilities. It is a National Historic Landmark Districtwith over 49 buildings of historic significance, spread over 1,200 acres.”