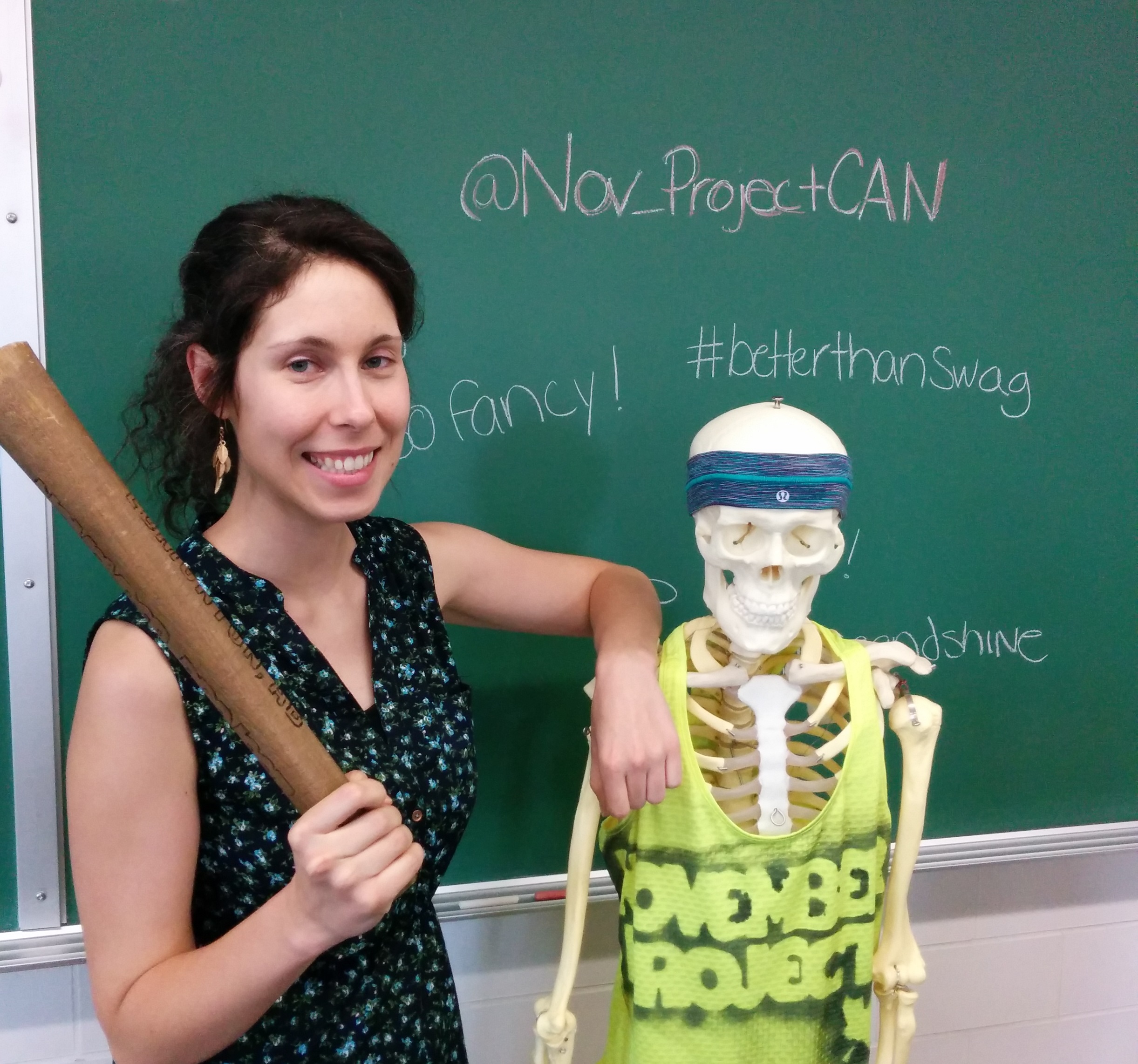 This was the first time I “met” Manon…via a tweet about an impending move to an unfamiliar city full of strangers and a random comment about trying out November Project Canada. What she didn’t know about the tribe is that there is no such thing as random with the NP tribe! It didn’t matter that Manon didn’t yet know the meaning of a #verbal or any of the many possible iterations of what is considered to be a verbal…the tribe saw her tweet and the response was swift!  (Verbals and Fuck Yeah’s mean the same thing in every language)

We are so happy that within 24 hours of arriving in her new city, Manon came out to join us and her YEG adventure began! Meet Manon…

I officially arrived and moved to Edmonton on May 15th, 2014. It was a rainy, windy Thursday and quite honestly, I was a little anxious. I left family, has-to-finish-Phd-before-moving-here boyfriend, friends and the Kittyciraptor in Québec to start a new job.

The job was the opportunity of a lifetime and it took about 3.4 seconds to decide to seize the opportunity and move 4000 kilometers away from Québec to a city and province I’ve never set foot in. It was only in the middle of my road trip somewhere in Western Ontario, eating lunch in a REALLY weird restaurant full of now-deceased stuffed animals that I realized something HUGE. As I was munching on my BLT sandwich next to a borderline scary, stuffed, wild turkey, I wished there was someone with me to share this hilarious moment. It suddenly hit me; I was really all alone in this new adventure and everything I would be doing from now on would have to be by myself.

Living alone, language issues (including a neverending Taboo-style guessing game to explain what I am looking for in stores), not knowing a single soul in town, nobody to help me understand Ikea furniture plans, etc... It was a lot to handle at once. To top it off, I quickly became nervous about the new workout routine I would have to build up here. I knew it wouldn’t be easy, coming off from a pretty sucky lazy winter and not knowing any local gym, trail or park. Not having anybody to be accountable to (‘’I’m so going out for a run tomorrow morning’’…ends up as a snooze to infinity and beyond because nobody will never ever know it anyway) would however be the most challenging part. It quickly could have turned into a ‘’let’s eat ice cream and drink wine’’ recurrent pity party.

Luckily for me, it did not.

I learned about November Project last year, after randomly reading about the fitness movement online. I remember how awesome I thought it was, how I laughed at a few ‘’We missed you’’ blog posts and how sad I was that there was no such thing in Sherbrooke. When I learned I’d be moving to Edmonton, I sent out what I thought was a harmless tweet about me moving there and being excited to try it out. I could always back down any moment, right!? I quickly learned that the tribe does not mess around with verbals casually thrown out there.

‘’Eagle-eyed’’ Bob noticed and remembered my tweet; when I announced to the world via Twitter that I made it safely to Edmonton, he immediately tweeted back wondering if I was coming to Emily Murphy park for hills the following day. The accountability factor worked up its magic from day one; 140 characters was simply not enough to build up an excuse of why I couldn’t come. With this big ‘’Why not!?’’, I looked for my workout gear through my unpacked luggage and set my alarm clock to this ungodly hour.

I was a nervous wreck that first morning. I was scared I wouldn’t find the meeting point (although the neon-let’s-get-loud-and-colorful theme that day made it really easy to spot you…!) and that my cardio would be nowhere good enough for me to show up. I was so intimidated, I considered quietly sneaking back to my car and leaving unnoticed at some point. But random people said good morning and suddenly, leaving unnoticed wasn’t an option. I stayed. I sweated, struggled up the Emily Murphy hill, received a gigantic number of hugs and let the positive attitude and energy sink in; I saw a glimpse of why sane people would be so eager to wake up that early 3 times a week year-round and it gave me the kick I needed to start working out again.

To be honest, I’m still astonished and amazed how genuinely supportive the tribe is. It does not matter if you casually run marathons or if your lungs are angrily screaming at you after a flight of stairs. It took me a few weeks to realize that being part of the tribe isn’t about being the fastest or the strongest; it’s about deciding to do something of yourself and showing up. It is really just about showing up. And once you get that, you’re part of it too.

I don’t think I could ever thank November Project Canada enough for the warm welcome I got when I arrived here. It gave me something to look forward every single week (while also scaring me to death of what to expect of Alberta’s weather for the months to come): consider your mission accomplished guys!