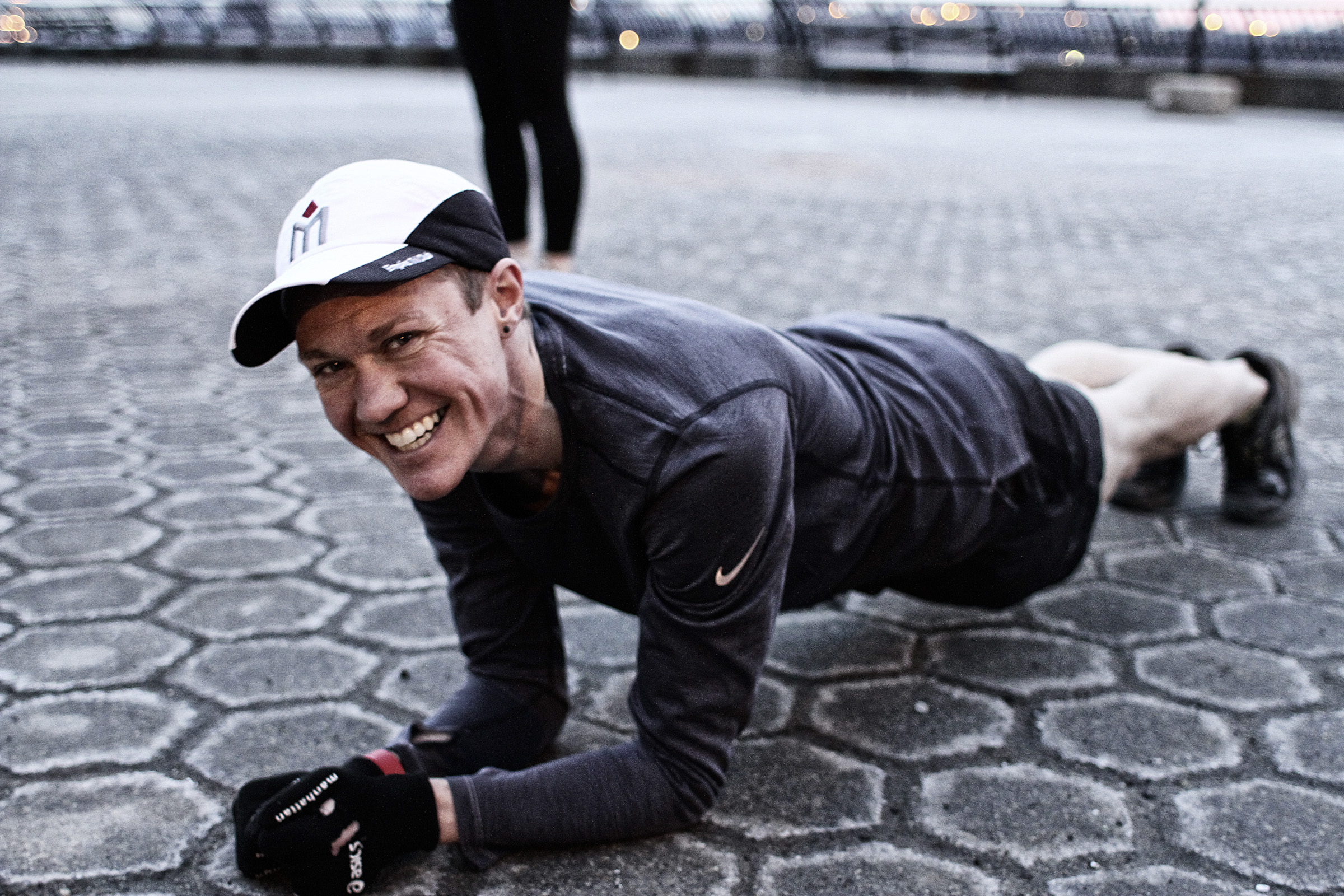 Chris Mosier is 100% badass.  He came to us when we were still a handful of people and his energy, fitness drive, positive fitness, and just all around hype gave NYC a new edge.  A new person to bring it every week.  Some to push us to push our limits.  Someone to push the boundaries and tell us to keep going.  To take that next step, but not stop there.  Chris raced the NYC Triathlon, set a PR and did some cool shit along the way.  Then, went to Gay Games 9 and go silver in the Triathlon.  Can’t stop racing.  Won’t stop.

Bounce. Bounce.  November Project had me at GOOD MORNING, but hooked me with #fuckyeah.  I’m a sucker for a perfectly timed expletive, and 6:28 am is about the perfect time.

In February, I found out November Project NYC was in the pledge phase. I showed up in week four with fewer than 10 people there bouncing that morning. It was perfect: 28 degrees, icy and dark, and the first thing that was said to me was, “we don’t shake hands, we hug.” People in my circle are not generally huggers, so it took me a little by surprise, but the energy transferred through a series of embraces before the sun rises cannot be put into words. Maybe I was okay with it because it was so cold. Maybe I wasn’t thinking about how this greeting would go down in July when we look more like swimmers than runners. It didn’t matter; here was a small group of cool people, all doing this badass thing in the freezing cold together before the sun came up.   I loved everything about it. I kept showing up, and watched the tribe grow exponentially each week – 10 to 20, and suddenly to 50, and up to 89, and then to Summer Fridays, and now more people than I can remember if I’ve met them before.  Hugs all around.

My wife and I often talk about how difficult it is to find community in New York, despite the number of people here. I like good people, and I’ve spent the last nine years here searching for them. I found a small group in my tri club, but I found a lot of them at NP NYC – people who, having only known me for months, celebrated my achievements and congratulated me on my induction into the National Gay and Lesbian Sports Hall of Fame more than people who had known me for years.  They put together a cheering group when only a few of us were racing the NYC Triathlon (seeing them was one of the most amazing parts of the race), and they ask about race results. They also ask about things not running related and want to hang out socially – and they make plans to make this happen, which is a rarity in NYC when everyone is just so damn busy. They take great photos and are super interesting people: film makers, fundraisers for non-profit organizations, police officers, parents, personal trainers, personal assistants.

They push me to go a little harder, hold a plank a little longer, and be a little better. No attitudes, no judgment. I take this with me to other places and races. Negative people don’t willingly get up to meet a group in any weather before sunrise and put in work. Positivity breeds positivity, and there is no recessive gene – good brings good, period.

Wednesday, 6:28 am, Gracie Mansion. Come meet the community you’ve been looking for.

One Reply to “Meet Chris. Chris is pretty badass. (NYC)”