First off, great job on the hill this morning! You were ready and you crushed it!! Monday’s location will be posted later this weekend. OK…now to the more important stuff…

I am so proud to introduce the tribe to someone I am certain needs little introduction. Arriving each morning on his bike, safety vest and all, Balkar is a constant presence at our November Project Canada workouts. He rarely misses, although I do recall his poking his head out of his house one morning when we were working out only about 100m from his front door! Always smiling, always working hard, always game for anything, Balkar represents the true spirit of November Project. His journey is inspiring and his influence admirable. Take some time and meet Balkar. 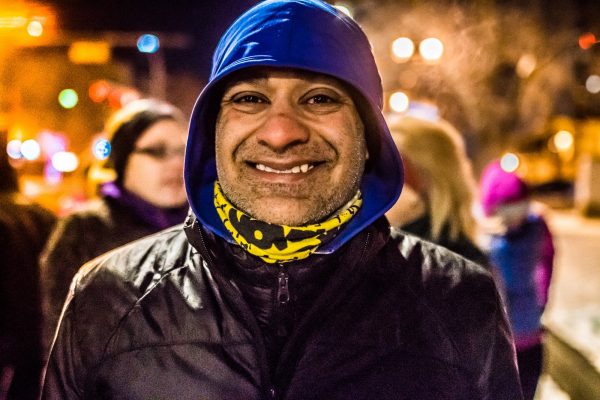 Hello, my name is Balkar.  Jen asked me if I would be interested in writing a blog since she thought my story might be an inspiration to others.  My journey began 4 years ago in March 2014 it was my 40th birthday.  I was overweight pushing 190 pounds; I decided I needed to make a lifestyle change.  I had been riding my bike for years and walking since I had an old knee injury from when I was a teenager but was not losing the weight.

I started tracking what I ate on myfitnesspal and thought I should increase my fitness level.  I saw this story on the news that Andrew Ference was doing this free fitness thing in November or something like that and they had this group working out in the fountain at the legislature.  I thought, this is crazy, who in their right mind would get up in the wee hours of the morning to run around in the cold water. I also thought, could this be real… if so, WOW! What a wonderful thing for an NHL hockey player to do for the community.

So months passed and I thought to myself, I should go to one of these workouts. Maybe next week when it is warmer since I cannot go today, its way too cold, dark, and I need my sleep.  If there was an excuse, I could come up with it.

Finally, Friday, July 11, 2014, I decided I should go.  I arrived at Emily Murphy Park and there were all these people standing around.  I was standing in the back feeling a little intimidated since I did not know anyone. Suddenly everyone started this bounce thing and asked if anyone was new. I was too scared to put of my hand all the way, so I put it up partially. Everyone was very welcoming and for some strange reason very happy – must have been the endorphins. We were instructed to run up this hill. I, however, do not run. I have knee injury had not run in 25 years. I thought, maybe I could fast walk or attempt to jog. I attempted to jog up this hill, panting like a dog, and felt like my chest was going to explode. I hung in there surrounded by all these positive happy people who enliven you.  At the end of the workout, Andrew started speaking about bringing November Project to Canada one year ago. Andrew proceeded to stand up on this picnic table and popped a bottle of champagne as if he had just won the Stanley Cup and everyone started singing happy birthday.  I thought this was insane – is every workout a huge party? I was hooked on the positivity and the energy was electrifying. 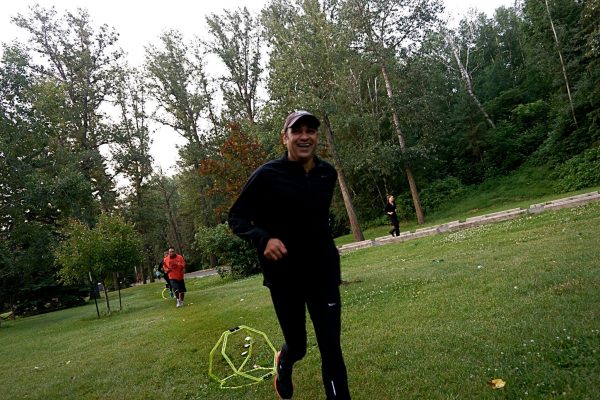 I kept coming and thought, what else am I doing at 6 am?  I had no excuse I can make this my new normal. About six months of this and my clothes were no longer fitting; I lost 50 pounds and felt like I was in the best shape of my life.  I kept hearing about all these races which fellow tribe members were entering. I thought to myself I do not have to race to prove anything. I was still surprised that my knee was not bothering me and that I could even run. 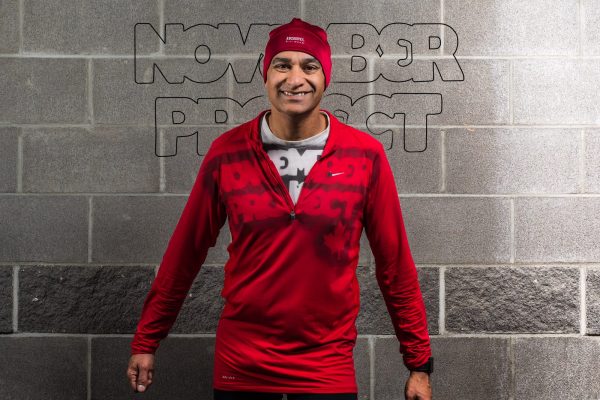 After saying that I ended up in my first race – the Sunrise 6k. This seemed like a daunting distance, but everyone waited until the last person came in.  This lead to me joining the corporate challenge road race. Fast forward three years I came back from a trip from Toronto in May 2017 and decided I should run a marathon.  I spoke to some tribe members to see if one can train for a marathon in 17 weeks, to which they replied – yes!

Tribe members are very supportive and encouraged me to do some MEC runs. I ran my first 15km trail run and it was so wonderful seeing all these November Project tribe members in their grassroots gear.  Then I signed up for the St.Albert MEC race. I could use it as a long run for my marathon training…I probably should do a half marathon before attempting a full marathon. I showed up and see Jen (NP tribe leader Edmonton) and Lauren (NP tribe leader Ottawa) at the race.  For 21.1 km, I kept up with Lauren and Jen. Jen, being an amazing pace bunny, ushered Lauren and me to a sub 2-hour half marathon. 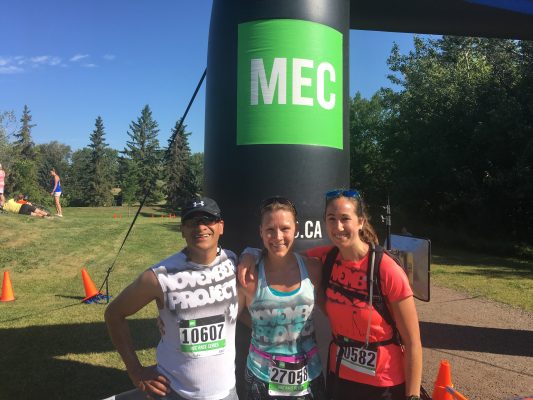 n. I thought, Ken seems to know what he’s doing. I decided to follow Ken for 15 km as he was running the tangents at a steady pace.  When I saw the 4-hour pace bunny fly out of the port-o-potty I thought this must be a sign divine intervention, I should try to run a sub 4-hour marathon. So I did! Throughout the race, there was the one constant in my 4-year journey – Nadim and November Project tribe members’ optimism and cheering. This led me to accomplish something I never

even thought was possible – the ability to finish a marathon, which was my goal. This was a pretty big deal since in 490 BC Pheidippides ran from Marathon to Athens to deliver a message Nenikakamen “We have won!” and then died.  I think NP makes us all winners for showing up no matter what pace you go at. 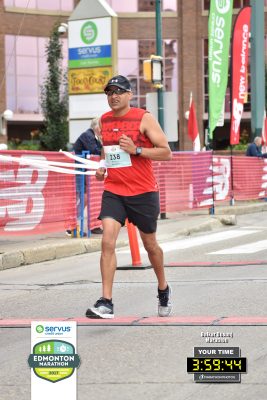 I remember the words Jen says about how NP inadvertently makes you a runner.  In doing so it can also help you inspire others. I introduced one of my co-worker Brian who was 250 pounds to walking/jogging during lunchtime.  Brian is not a morning person so, despite my best efforts, I have not been able to get him out for NP but he does follow November Project as a source of inspiration.  Brian has a blog post about his transition to running and weight loss, having lost half of his body weight, 125 pounds!  Brian is now a very fast half marathoner and wants to try to do his first marathon this summer with a goal of qualifying for Boston.

I truly cannot thank Brogan and Bojan enough for having their vision for #WorldTakeover, Andrew for bringing NP to Edmonton and being such a leading exemplar for the community, Nadim for all the motivation and high fives, and  Jen for being a truly positive person whose strength elevates everyone around her. The tribe itself and all the other tribes for this amazing community, high fives, hugs, and words of encouragement.   November Project you have truly changed my life for the better. I hope by sharing my transition from walker to runner, I can inspire you to #justshowup since a thousand mile journey begins with a single step! BOOM! 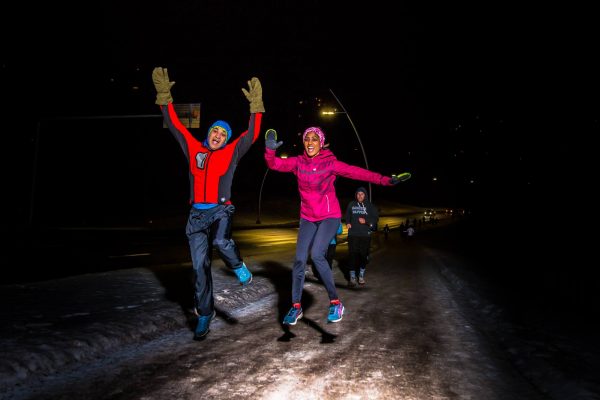