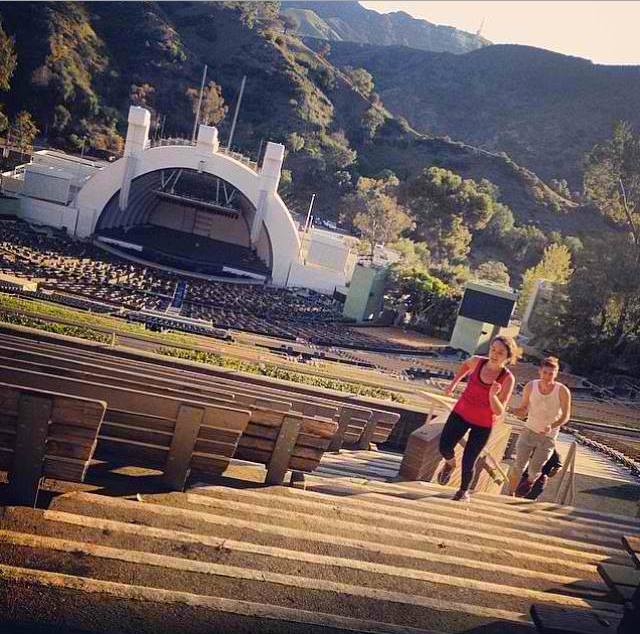 Jenna Nagler has been a core member of NPLAX for quite a while now. This girl not only defies what it means to challenge yourself but also has a great spirit and true spunk. We have seen her get faster, fight asthma attacks and get wild every Wednesday. Nagler this past Wednesday pushed herself harder and proceeded up “the bitch” without stopping, multiple times. Progress! She may think that she is slow but she’s lying. She’s only getting faster everyday. Turning it over to you Jenna.

For those of you who do not know me, I was never too keen on the idea of moving to LA. (Those of you that do know me know this is the understatement of the century, and I simultaneously thank you and apologize for the 3 am phone calls). The thing is, NY, home to me, is filled with love and comfort and great pizza! LA had none of that. But I am never one to shy from a challenge, or an adventure.

So on a Thursday afternoon I bought a one-way plane ticket for the following Tuesday! (And boy did I hate every second that followed…) I was terrified of everything: Earthquakes, driving, never getting hired, earthquakes, finding a car, finding an apartment, earthquakes, committing to my first car, committing to an apartment and job etc. In the midst of this I received some news that warranted me getting on the next plane to NY. That was it; one month in LA was plenty for me. After some negotiating and encouragement from some pretty amazing people I decided to give it one more try, but only through the summer. I mean, I had already bought a car (his name is Schnaz!) and these Emersonians out here are nothing to complain about.

So I started to compile an ‘LA Bucket List’. I added November Project after being introduced to Orrin. The sheer passion and excitement he emitted when he spoke of NP was more than enough to deserve a verbal from me, and a spot on my list. Let me take this moment to clarify: I am not an athlete. (Shout out again to those that know the severity of the term ‘understatement’ here). I’ve also never been one to associate the ideas of ‘positivity’, ‘fun’ and ‘working towards a healthy life style’. So, weary-eyed at 6:29am I started to second-guess my decision. This lasted all of two minutes until the first “Fuck Yeah!” was screamed; follow by some piggyback races and a dance break out. I continued to laugh my way through the remainder of the workout, regardless of not being able to feel my legs. That’s when I realized being an athlete was not a qualification; you just have to be a fucking weirdo.

Week after week, without even realizing it, each one of my fears was replaced by a high five or a sweaty, sweaty hug. Being surrounded by that much positivity made it hard to hate LA as much as I had. Now here I am, 3 months later, putting a sweater on any time it drops below 70 and frequently forgetting I have a blinker when turning. I mean, I also have my dream job and I adopted a puppy (his name is Bear!). Week after week I also continue to finish last – dead last – but I wouldn’t have it any other way. Coming in last means running towards a finish line consisting of your biggest fans cheering you on. The best part is, some of these fans are people who didn’t know your name 5 minutes earlier. That is something everyone deserves to experience. So #JustShowUp, no excuses! I promise waking up early doesn’t matter when you’re excited to get there, it is like going to Disneyland as a kid with an added chance of vomiting… On that note I would like to wholeheartedly thank NP for proving how much fun getting healthy can be, being as weird and welcoming as possible, giving me something to look forward to and get excited about week after week and most importantly my tribe; for making me feel comfortable in the city I now call home. LA might have given me asthma, but it also gave me some fantastic people and for that I love you.