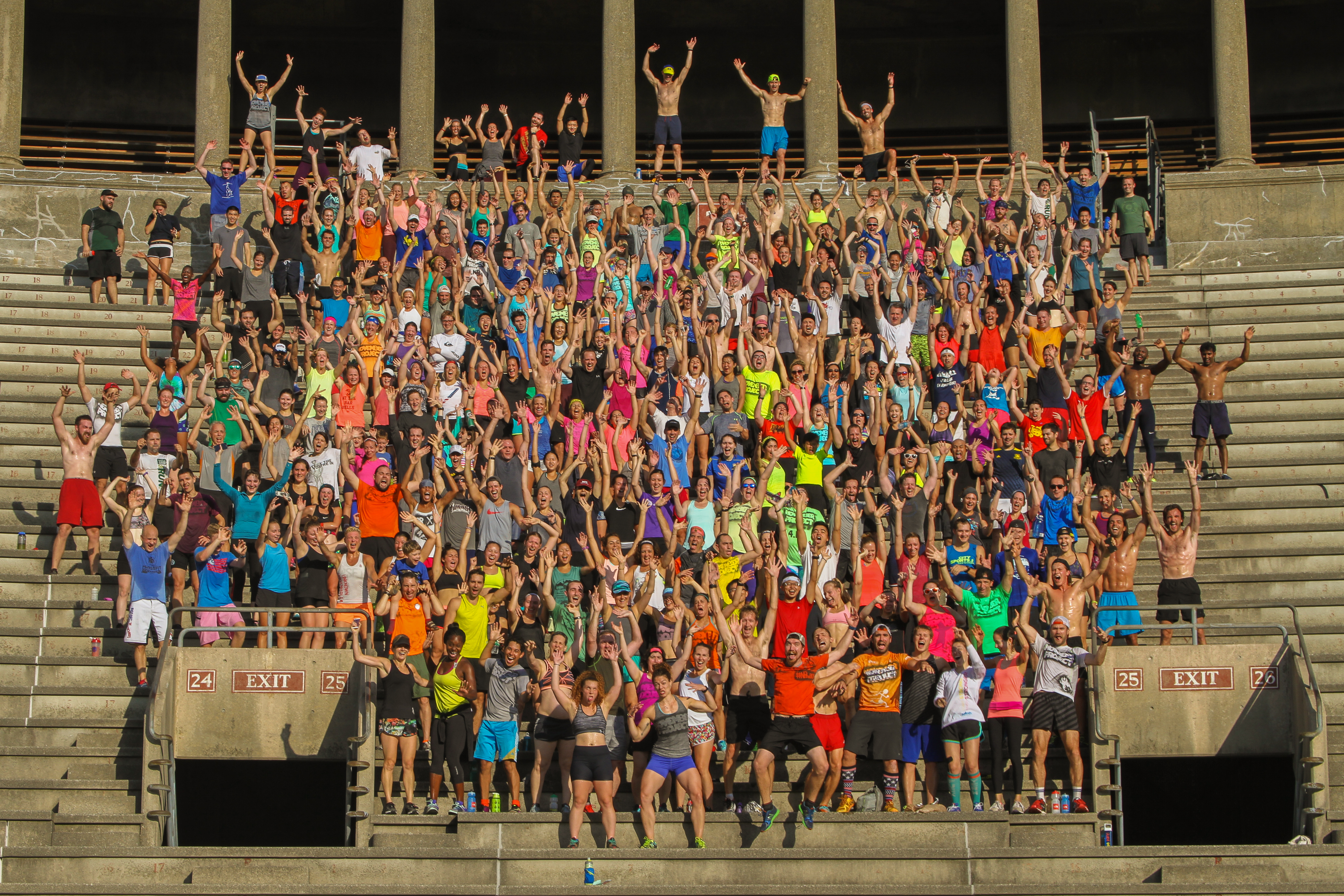 Let me introduce the month of Frogust.  It’s August on the calendar but Frogust for everyone in the stadium in Boston.  It means that you’re used to showing up each Wednesday and hearing your fearless tribe leader tell you what weird shit we’ll do today.  Sometimes it’s 40 sections, sometimes firedrills, sometimes Relayman or the dreaded/beloved Raceman.  Sometimes it’s Frogman1, and always on the last Wednesday of the month, it’s a full tour race day.  But this year, the month of August is officially, (no…really!) being dedicated to the workout Frogman1.  Which, for those who are uninitiated, is 50 sections in the stadium during one single workout.  Often completed by running from 37 to 13, repeating 13 and returning to 37, so there’s a turnaround half way through.  Today we did it by running from 25 to 1, repeat 1 and back to 25.  Finish before the 6:20/7:20 cut off?  #FuckYeah

So, Frogust is the insane idea that we do Frogman1 EVERY. SINGLE. WEEK. of August.  Just because it’s really hard.  Just because it’s never been done.  Just because some of you might question whether you seriously want to show up every week because…Frogman1…again?  YES.  Exactly because of that.  Because we need to get uncomfortable.  We need to try new things.  We need to challenge ourselves.  But during the hottest, most humid month of the year?  Yup.  Exactly then.  Welcome to Frogust, friends.

BUT EMSAUCE!  The fast kids can complete Frogman1 but that’s just wayyy too many sections for me.

Ok ok, we get that too.  So let me introduce…

This is just like Frogman1, but your destination is 30 sections, not 50.  Today all you human beings attempting #TadpoleStatus started at 15 and ran toward 1, then hustled your asses back before time was called.  If you didn’t get there…good! You’ve got 4 more weeks to work on that shit and join the tadpoles.  If you got there? Then you’ve got 4 more weeks to get as fast as possible at Tadpoleman.  Orrrrr, you could set your sights on another new friend I’d like you to meet.

Polywogman.  (formerly known at the 5:30 workout as “Tadpoleman with legs”)

This workout has more legs than Tadpoleman, so it’s longer.  40 Sections makes you a Polywog, which is the biological term for the developmental stage beyond a Tadpole but not quite a Frog.  Silly EmC2 wanted to call this workout “Tadpoleman with legs,” but this new guy formerly named Tim, kindly informed the 5:30 group this morning that a Tadpole with legs is actually called a Polywog.  So that workout is now called Polywogman.  Tim will also be known as Polywog from this day forward.

BUT EMSAUCE!  I’m one of those fast fuckers who finishes Frogman1 and then hangs out for a few before the group photo.  What about me?

Ok dude.  We hear you too.  Let me introduce…

It’s bigger.  It’s wart-ier.  It’s way fucking harder than Frogman1.  It’s 60 sections in a single workout.  If you have big goals or legs & lungs we all admire, you do this workout every Wed of Frogust.  We dare you.  Double FROG dare you.

There you go.  A whole new cast of characters to get to know this month.  #JustShowUp and make new friends.  Make friends with the newbies who should become regulars (and who in a totally non-culty way today got tagged with zebra duct tape on their left shoulder to identify them as newbies).  And make friends with the workouts named after an army* of frogs in all their developmental stages.  We’re gonna spend a lotta time together so let’s get friendly.  It’s Frogust.

In other news: Coleader Chris Payne celebrates his bday today.  He wore a frog suit to the workout.  He also had to play “Tortilla Face” with a cold domino’s pizza at the 5:30 group, and shotgun a burrito that Capozzi dangled above his head for the 6:30 group.  Payne loves his comfort food, and we love Payne and making weird shit happen for Bdays.  Today was…niiiice.  Happy birthday buddy.

Also, Isabel Broer received the Positivity Award today and she deserves the shit out of it.  We’re glad you’re here Isabel.

Have some pizza or a burrito in honor of Chris Payne, or be a really positive and awesome person in honor of Isabel, or go hug a stranger in honor of this cool little #community. Just don’t let the waves of awesomeness from this morning stop.  Keep riding those waves!