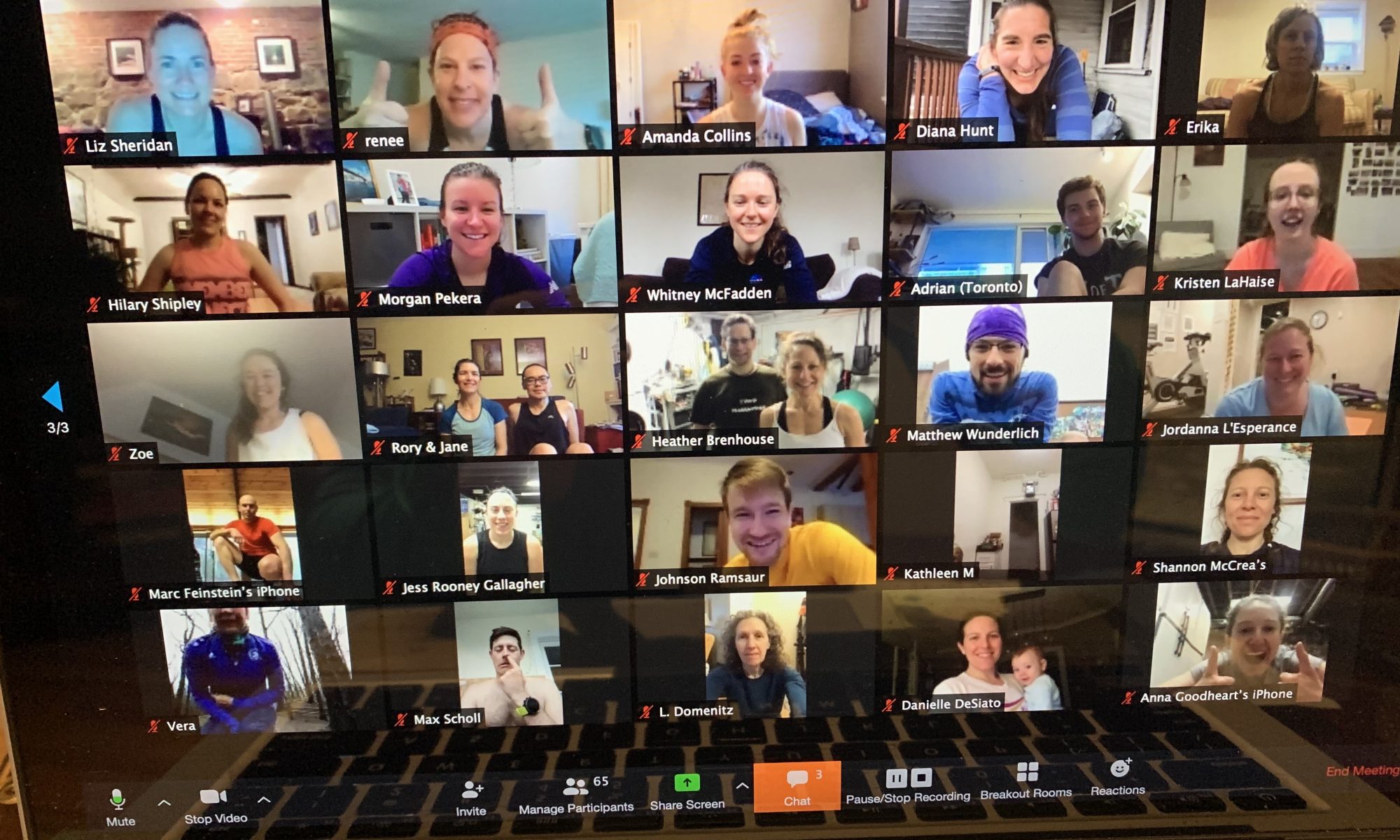 It’s been, shall we say, a hot minute since we’ve all seen each other…in person. We’ve now officially had 8 virtual workouts in Boston, and the last time we gathered in person was March 11th. That was 19 days ago.

When I started attending November Project Boston workouts back in the fall of 2013, I didn’t know how it would impact me, or change me, or influence the forward direction of my life. What I knew was that I went to a Monday workout, during which I tried so hard, I almost threw up, and then I decided I needed to see what Wednesday was like…and then Friday…and I just kept coming. The sequence continued and the rhythm that my life began to have simply included the consistent beat of NP. I became a little more intentional about getting to bed on Sunday, Tuesday, and Thursday. I enjoyed beautiful weekend opportunities when I could climb the stadium stairs in the sunshine. Sometimes that was with other people and other times in blissful solitude.

But no matter what, my days and weeks had this connection to November Project–to the feeling of the bigger community, both in Boston and in the growing number of cities around the world. And also to the physical movement, the fitness that was so wonderfully free, but also that re-connected me with the focus and intention of training my body to be strong and capable, which I had pursued as an athlete most of my life. It was freeing and familiar to feel that part of me again, especially now in the context of a group–not quite a team, as I had had in the past, but the feeling of togetherness–not alone-ness– was so similar to my best experiences of a team, it was like I exhaled a sigh of comfort, of knowing and of being known, each time I showed up to a workout. And I kept showing up because I felt connected. I felt excited about it. I felt a little like I imagine the profound underground connection of trees–you know how they build these vast and intricate systems of root connections such that they actually communicate to each other underground, even over large geographic distances. It’s just like a connection that you can’t fully see, you hardly understand, but you also have to recognize it exists because it feels so real.

Now, I know that your story of finding NP, joining NP, and making it in any way a part of the rhythm of your life–your story is different than mine.

But right now, when it’s been weeks since we’ve exchanged a hug or high-five, now, when we’re doing our best to juggle all the weird responsibilities and restrictions and vulnerabilities and challenges, now is when we all are likely drawn to notice how OUT OF RHYTHM we are.

Being out of rhythm can feel disruptive, weird, hard, scary, sad, lonely, surprising, unexpected, and a million other things. Basically, whatever you’re feeling right now, you’re right on. It’s simply what you’re feeling.

But I bring all this up to remind all of us who are connected to and through November Project of something important. #NP_Continues isn’t just a hashtag. It isn’t just some social media thing for us to use (though it’s helpful for that). It means what it says.

We might be out of rhythm because everything is different now than it was 3 weeks ago. But NP is like a steady beat from the drummer in the background. That beat continues–even though we need to figure out a different tune to sing, a different melody and some unique harmonies during this wild time of physical distancing–but the steadiness of that beat that NP provides can allow us to feel something familiar, something comforting, something that we know and where we are known, on which we can base a new rhythm. This movement continues.

So it’s been a while since things have felt normal. And it’s very likely it’ll be another long while before things feel truly normal again. But remember that it only takes one steady thing to start a foundation of normal, and because we’re going to keep showing up virtually, because you can keep working out (even on your own) and sharing it with your NP community, because you know that people care how you are, because you don’t have to be alone when you have this community, you have the steadiness available to find the rhythm.

We encourage you to stay connected to NP_BOS as much as you can, and as much as you need to. Remember, it’s always okay to go for your own run, do your own workout, or make the fitness choices that feel best for you. AND that doesn’t need to separate you from our amazing Boston NP community. Share your stuff on social media (tag November Project Boston and use #NP_Continues), or connect with one or two or 12 other people about your workout. Do runs together on FaceTime, or Zoom, or the regular phone. Do a deck of cards together with people. Share some fitness challenges. Join the Mon/Wed/Fri 6:29am virtual workouts we’re doing every week.

Get what you need, just remember that NP_Boston isn’t going anywhere. We’re steady, holding that beat in the bigger rhythm that you and I are all figuring out. And when we get back to in-person workouts, we’ll continue that steady beat, because that’s what NP has done since the beginning of it’s existence, and it’s what we’ll continue to do. #NP_Continues.

Share about our workouts: on zoom (link in our IG bio, on FB, and right HERE.) Monday, Wednesday, Friday 6:29am. We also record most workouts and post on FB and IG bio link.

Monday: 6:29am. We’re doing a traditional #destinationdeck style workout, easy to do inside, and accessible for outside too.

Wednesday: 6:29am. We’re doing the NP Global workout, which gets posted publicly on November Project socials on tuesdays. Boston does this workout together on Wed mornings.

Friday: 6:29am. We’re offering an option of a running workout or a deck of cards. Just like we run hills in Boston on Fridays, we’re encouraging everyone to find a hill and run–either while you’re on Zoom with the group, or by showing up on zoom for the bounce, doing your run, and rejoining the group at 7:20am for the announcements and group photo. Everyone doing a deck of cards, does that together on Zoom while the run is happening.