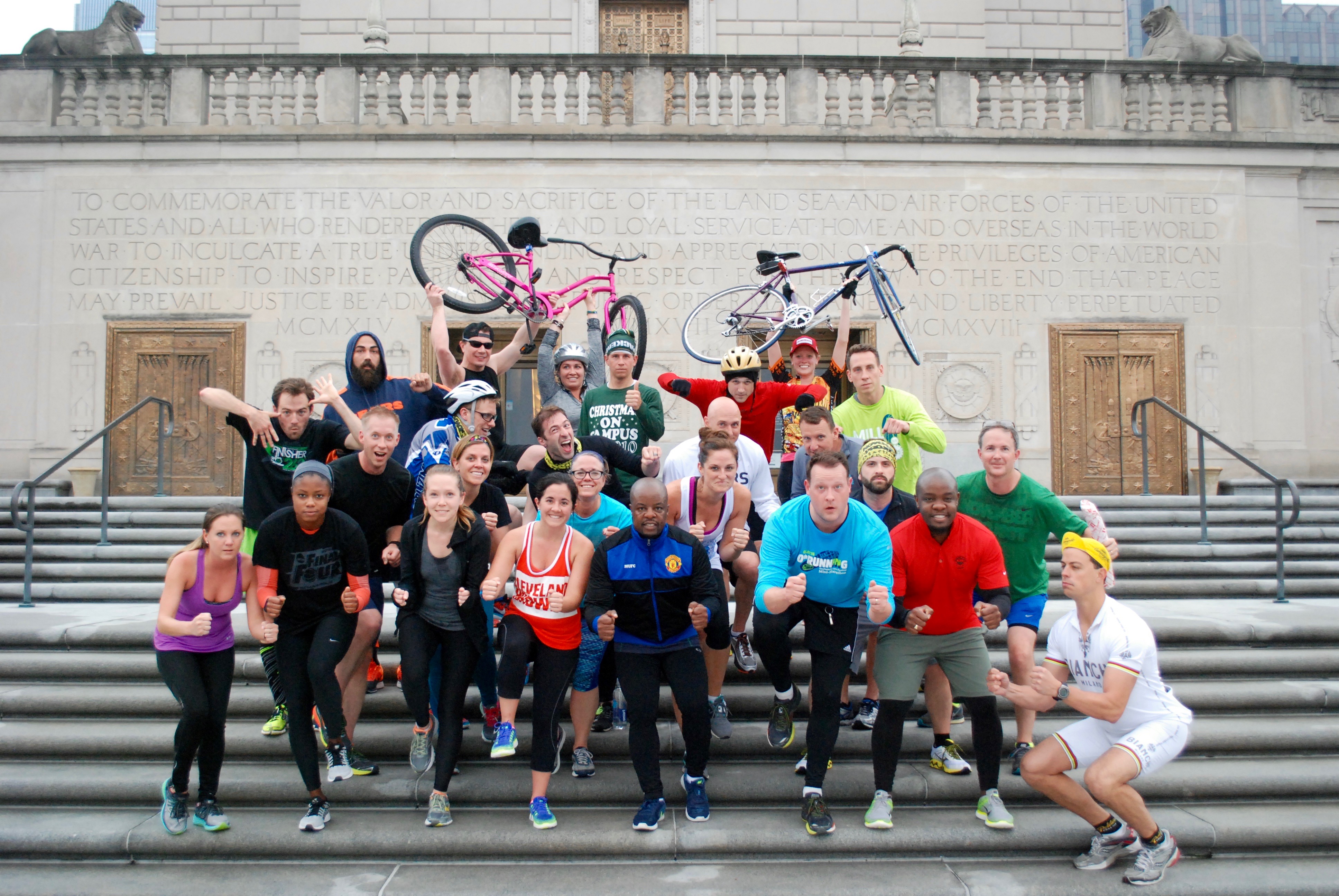 Shaw promised a funnier blog post this week . . . then he left the blog up to me.  [Prepare yourself; it’s a loooong one.]  But for any complainers, as my kindergarten-teaching wife taught me, “You get what you get, and you don’t throw a fit.”  I’m beginning to wonder if grade-school level references are a subtle secondary theme on the day. [See bounce description for further info; also, in attempting to use footnotes in this blog post—law school has drilled citation standards into my brain while attempting to drain me of any personality in my writing—I found out footnotes don’t work in WordPress blogs.]

The main theme today was “Bike to NP” since Friday is Indy’s Bike to Work Day.  Plenty of cyclists showed up on both real and (mainly) imaginary bikes of all types, as the above 6:15 group shot illustrates.  No bikers or biker gangs though, so somewhat disappointingly no assless chaps, leather, chains, or cheap sunglasses either.

The Bounce :
I’m outlining the bounce because it was my first one, and I got tribe members to yell words (or at least the second half of words) you wouldn’t normally yell in public.  For those who weren’t there, I’m not going to tell you what those words were because #JustShowUp.  Finding Nemo helped us welcome newbies as we greeted them with reluctant-sounding fishaholics anonymous hellos.  Movie buff Jason Shaw (or perhaps better fitting is “the artist formerly known as movie buff Jason Shaw” #RIPPrince) has never seen Finding Nemo and is currently attempting to weasel his way out of that fact on FB by making the rest of the world feel ashamed of liking colorful fish.  During the bounce we gave some praise to NP, denounced pay-for-fitness, said some other words, and went into the intro of Queen’s “Bicycle Ride”.  Bobbie Werbe inspired (shout out to the OG!) ASS-IN hugs were the cherry on top.

The Workout:
We started with a run up to the northside gold door (I know it’s not actually gold, Stew), bicycle lunged (leaping lunges) across the top, down the steps for some bicycle crunches at the bottom, sprinted back up to the southside gold door, heinies—er, high knees—across the top, back down, and finished off with some cool, refreshing bicycle burpees.  Though the steps were wet from monsoon season, no NP cyclist broke a clav—ICLE.

The Notes :
• RE denouncing pay-for-fitness: Lex non favet delicatorum votis (the law does not favor the wishes of the dainty; meaning, an action does not lie because of a trifling inconvenience; really meaning, though we’re the trifling inconvenience to pay-for-fitness buggers using the War Memorial, those triflin’-ass fools can step off, suuuuun. #UseLatinForGreaterBillableHours #UsedUrbanDictionaryToCheckThatIAmUsingTriflinCorrectly.
• Race Day next week.  It’s also the last Wednesday before the Greatest spect—ACLE in Racing, the 100th Running of the Indianapolis 500 Mile Race (aka the Indy 500)!  We will be tagging, so bring your gear, and thanks in advance to the tag-team volunteers.
• A very special thanks to Jaden Brown for taking some, how-do-say bomb-ass pictures during the 6:15 workout in response to the #NP_YEG “Calling All Tribe Members” blog post.
Had a lot of fun leading for the first time today.  Felt a lot of warm support from the tribe, and Shaw is a gem to work with.

Have a wonderful week!

ps:  If you can’t make the Indy 500, you can try to watch it on your television (is that how you spell it @Nov_Proj_Balt ?), unless of course you’re too dang busy fixin’ to shoot yournself some squirrels.  Someone tell #NP_BAL the frontier’s been extended.