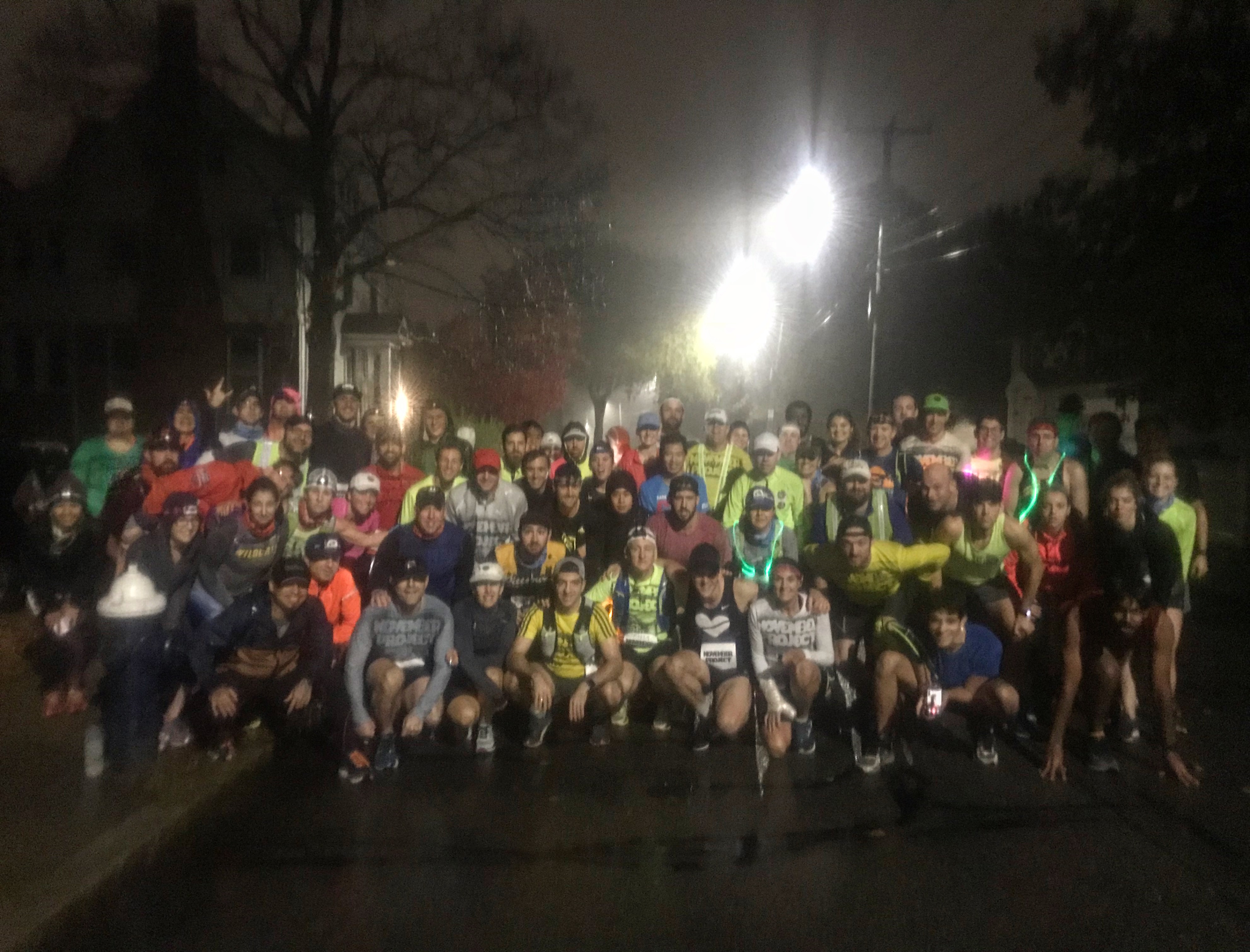 We did it again.  Hell week is officially over, but we also completed WOahMAN for the third official time, and it’s all over now.

I’ll admit that I’m a little tired from the very (very) early wake up call this morning, and that may possibly have influenced why my “speech to the tribe” at the 7:25am group photo was mostly just “I love you guys” and “this shit is so good for all of us” and “I love you guys”…but at this point, I’m working on reflecting a little bit on the WOahMAN experience, on the morning as a whole, and this whole damn week.  It was a HELL of a week.

Some highlights: There was a solid crew of people who made it to all three days of Hell Week.  Massive Newbie group on Wednesday.  And not only a large group taking on WOahMAN at 4:30 this morning but almost half the group was doing it for the very. first. time.  Bunch of badasses.

Now I want to make it very clear–this morning was NOT only about WOahMAN.  There was also a dedicated group of folks who showed up to work hard on the Summit Ave. hills and they got to do some burpees at the top of the hills too.  But I’m going to let this blog focus on WOahMAN because it is a rare event–that we definitely (and thankfully) don’t do every Friday.  So please remember that we like all of you, but today we are giving an extra shoutout to those who got the fuck up, showed the fuck up, and did the fucking WOahMAN thing.

WOahMAN is a real kick in the pants.

4:30am is early.  It’s SO early.  It means that unless you live ON summit ave, you are very likely hearing that alarm ring in the 3 o’clock hour.  And if you’re Roger or Peanut from Worcester area or Lisa, Adam & Lizzie from up north shore area, you most definitely got up in the 2s, started driving in the 3s, and were at the starting line at 4:30.

And what better way to remind you how freaking dumb it is to be awake and racing at 4:30 than for it to be pouring rain down on you.  I think there’s a tiny moment when you’re like Andy Dufrane in Shawshank Redemption and you raise your arms up in the rain and appreciate the feeling of it because you’re alive, and you’re free, and you feel like you just crawled through a river of shit…but then you realize that you’re only just about to start the crawl through the shitty rain-puddled mine-field of lower Allston streets toward Harvard Stadium, where you’ll crawl up and down those 37 sections, and then make the return crawl to Summit Ave. and crush out some burpees and finish the final shitty crawl up and down the hills twice with more burpees in the middle.  The rain only adds an exclamation point and a double underline to the “woah…” of the event.  Maybe it made all of us pause for just a second and ask “is this the dumbest thing ever?” or even “maybe I’ll just run back home/to my car and take a nap until 6:30 hills starts…”  But everyone standing at that fire-hydrant-starting-line, soaked already to the bone, swallowed whatever doubts they had and took off on the journey that we call WOahMAN.

We are #weatherproof.  But there’s nothing like weather to make you prove it.

If you didn’t get lost on the way through those streets/parking lots/alley ways, around the correct turns, across the pedestrian bridge, and to the stadium, then you know that the stadium…well it sucks.  Hard AF.  Every.  Single.  Time.  And definitely more so in the middle of WOahMAN.  The first people to enter the stadium probably expected it to be dark.  No lights, no DJ, no hype hype hype.  Just good old hard work on the concrete stairs and the deep puddles perfectly pooled for the turn & go between sections.  If you weren’t already wet because you more aptly navigated the street puddles, there was basically no where to hide from it in the stadium.

And then, surprisingly, somewhere around 5:15am, the stadium lights came on.  I couldn’t tell if people were more or less excited to be running stairs with lights (isn’t it more badass if all you have is darkness?!?) but it was cool to actually be able to see the waves of human beings flowing up and down and all around.  But you know what’s really a kick in the pants?  A little later on in the morning, as the end of the pack was working their way through the stadium and one-by-one they became the only NP athletes left there, the fucking lights went out.  Brutal.  But they kept going anyway.

We think only a few people got lost–which is a strong risk you take when you jump into a totally underground/grassroots race with bring your own bibs and no course markings for route, turns, or distance.  For those who did–thanks for persevering through.  For those who helped the off-course runners, you’re the best.

And only one person ended the whole thing without her car keys–due to a rather weird and unfortunate “losing” of them during the race.  More on that in a minute.

Think about it–how many regular old run clubs could post a workout for 4:30am and expect anyone at all to show up?  Check out the photo at the top–this tribe shows up. We have not only people right in the city, and not only people without kids and responsibilities to uphold, but people from far away, and people who negotiate with spouses to make child care work, and people who make plans to be late for work just so they can show up.

What’s more impressive than getting up stupid early to run a race?  Being there in the rain and the dark because not only can no one understand why you’d do that–none of us can really understand why we’d do it, but it’s hard core.  It’s impressive and a really beautiful reminder that doing weird, hard stuff now and then keeps us feeling excited about those other normal days.  And it often inspires us to bring a little of that weird/wild/crazy spark into the regular days.  Just like Andy Dufrane in the rain after his river of shit, WOahMAN reminds us we’re alive.

Wait, I just realized that there might be something more impressive than WOahMAN in the rain.  It’s being the volunteer hydration station of WOahMAN in the rain.  There are actually an enthusiastic and amazing crew of humans who chose to get up early enough–supply themselves with water and gatorade–and then supply the entire WOahMANning tribe with hydration as we made our way through the stadium.  No one asked them to, and they definitely didn’t have to.  But they’re awesome and they did.  So thank you to the entire Half-Way Hydration Station (Max, Laura D, Rachel, Danielle, Sarah, Susan).  And thank you to all the tribe members who appreciated the shit out of them both during and after this morning.

The morning was filled with wild accomplishments–from Drew sprinting into his finish at the fire hydrant exactly as the group photo was being taken–to a couple of people coming off marathons less than a week ago finishing the darn WOahMAN–to Brian Frake and Billy Hafferty battling out (trash talk included) the 1 & 2 finisher spots for the men.  From Lizzie Pollio (of WOahMAN 1.0 fame) showing up healthy and strong–to so many amazing people showing up for their race, battling the physical and mental beast that is the race, as well as all the other hurdles that life has thrown out this week, this month, this year…

And just to offer a final additional story of shine to WOahMAN, I’ll return to that little thing I mentioned before about someone’s keys getting lost.  The owner of the car keys put them into someone else’s pocket just before the race started, and when she went back to get them afterwards…no keys.  No one’s fault–that shit happens all the time, but it’s just harder to retrace steps of an entire WOahMAN course than in a small park on a Monday.  So after contemplating what she could possibly do to get into her car (AAA can open the door, but the keys aren’t locked inside) or get a spare key (need to get one made), and after a couple of people took the key owner back to the stadium to look around there to no avail, the following is a summary of the rest of the events of the morning.  please note that within the whole story, there’s an abundance of general human kindness…and this is basically what NP builds in the world.  So read on:

it was a crazy series of twists and turns involving return trip to search the stadium, Noah giving me a ride home from there, then getting a friend to drive me from my house back to Corey Hill to try my spare key, waiting for AAA to come pop the lock, then driving to the Toyota dealership in Watertown to get a replacement key, where I run into my mechanic from my local service station, who tells me to come to him instead b/c it will be cheaper. Before going there, I dashed home to finally grab something to eat and check work email & happened to check FB, where I thank Laura et al for the water station, and she asks about my keys… which prompts Rachel to comment that they had seen keys outside of Trader Joe in Allston! So I called, & they had them!!! I dash there to get them (it’s now NOON and I still haven’t been to work!) and the customer service guy asks me about how it happened. I give him the Reader’s Digest version of the story and then go to pay for my groceries (figured i might as well pick up a few things while I was there), and to my great surprise, he tells the cashier to ring it up, but not charge me. He then says: “You had a hell of a day already, the groceries are on us!” Helloweewoahman of a day, is more like it!

Now, don’t let the moral of the story be: lose your keys outside Trader Joes, just to get some free groceries.

WOahMAN is awesome because we show up for it and make it awesome with our vibe, our enthusiasm, and our community.

NP is awesome, even in the form of Hell-a-wee-WOahMAN Week, because it’s way more than a badass, hard AF, dirty-underground race.  NP keeps pushing boundaries: in our cities, in our communities, and in our selves.  And we’re all much better for that.

Thanks for reading (maybe) all the way to the end today–I know it’s a long one, but the workout was long too.

Don’t Forget About the Social

Tonight: 6:30pm at Hopsters in the Seaport.  SEE THE MAP for the Social location.

Will be at the Southie neighborhood park called Dorchester Heights.  Not in Dorchester.  Capozzi’s working on renaming the park.  But see the map here.  And just show up at 6:30am!!