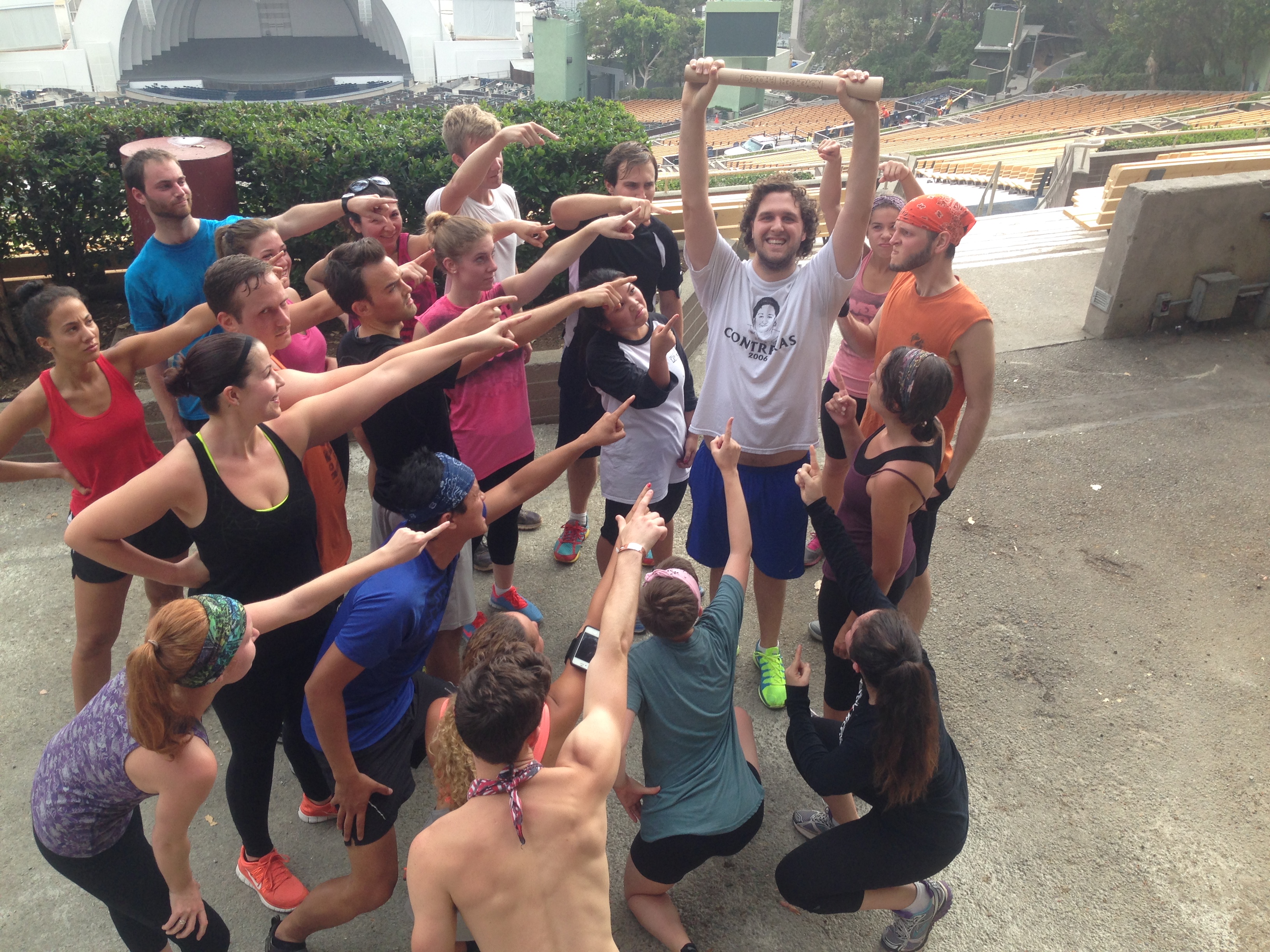 This week the positivity award was awarded to a consistent core member. He has been coming since NP LAX’s first pledge day and even when he went back to his home town for a week was insistent on doing the workout in big ‘ole Texas. This guy has some crazy dance moves, the biggest heart and every Wednesday pushes himself further and harder growing each week. Patrick McDonald in other words is the man. Here is his story.

MY NOVEMBER PROJECT: GROW UP OR THROW UP

My name is Patrick and–I can’t believe I’m saying this—I’m part of the tribe. I’ve been tagging along to the November Project every Wednesday morning since the first LA meet-up back in January of this year. Now let me explain to you why that’s crazy.

For my entire life, I have been what my parents would call “creative”, but what they actually mean by that is “entirely lacking in any athletic ability whatsoever”. I tried every sport in the book, be it baseball, soccer, basketball, football, golf, and even fringe sports like swimming, roller hockey, and BMX racing. It was a challenge to keep me active, and eventually, being active kind of fell by the wayside. I think the biggest reason that sports weren’t for me is that I was ashamed and embarrassed by how I was doing the sports. Eventually, when it came to anything athletic, I would be so embarrassed to go up in front of anyone that I would just shy away and pretend that I had a migraine.

I began exercising in ways so that nobody would be able to see me. I would run down back streets in my town, I would do push-ups and sit-ups late at night so nobody would hear me, and if my parents happened to catch me exercising, I would panic and say I wasn’t doing anything, like a coke head in a bathroom. Why was I so embarrassed if people caught me exercising? Who knows. Maybe I was scared of people giving me that dreaded compliment,”Wow, what you’ve been doing has been working!”, because that implies I had something I needed to fix, and even though I fixed it, you knew about it AND JUDGED ME FOR IT! Okay, okay, no need to get out the pig’s blood on prom night, I’ll calm down. Basically, if other people were exercising, you wouldn’t catch me there, because you wouldn’t want me there. I’d be the worst.

So how the hell did I end up in this tribe full of people who give sweaty hugs and scream encouraging things at each other and even TAKE PHOTOS AFTER THEY EXERCISE FOR ALL OF FACEBOOK TO SEE?

I’ve known Orrin for most of college, and he’s always been this beautiful shiny ball of positivity. I hadn’t seen him for a couple years, and when he moves out to LA this January, I hear of this November Project cult-y thing that he’s bringing over to Los Angeles. Luckily, since it came around the new year, and going to a free boot camp was sure to kick my 2014 fitness regimen (which I always have but never take seriously) into serious gear.

I show up that morning, and let’s cut straight to the chase—I throw up. I run a little, do 40 push-ups, 30 squats, 20 burpees, and about 8 dry-heaves. I was looking to shock my system, and good God was it shocked. After throwing up, I come from behind the tree to see that everyone has left and that Orrin is asking who left keys (“Those are mine”, Pukey McVomit barked). I went home and thought about how stupid an idea it was that I went to that thing. All my fears came true—I went with a big group of people, did very poorly, and even made a scene of myself, clearly showing my lack of physical ability)—but for some reason, I had an urge to go back. There was a drive in such public humiliation to prove that I can get better. This group, I felt, wants to see me get better. This group wants to see me come back. So I did. I came back the next week. And the next. Winter turned into spring, and spring just turned into Summer, and as I write this, I’m looking at the clock, because I know I have to be at the Hollywood Bowl in 6 hours, where I’m going to beat my own personal record like I have in the past.

Last week, I took a trip back home (to Texas), so I missed my very first NP LAX. It was heartbreaking, but instead of completely missing it, I did my very own NP workout, complete with running and various exercises along the way that I had crafted entirely for myself. You have to understand how big a deal that is for me. The only thing I craft for myself is breakfast burritos. But that day, I crafted two things.

If you told me a year ago that I would be involved in this crazy thing, I would have told you to get off my lawn. But now, this is one of the biggest things I look forward to. That’s right, Patrick McDonald looks forward to exercise. TAKE THAT, YOUNGER PAT! But it’s not just the exercise. It’s the community of people who smile wearily after bear crawls. It’s the hugs and the high-fives and the “fuck yeahs”. It’s the early morning sunrise over the Hollywood sign before the LA smog sinks in around us.

So yeah, I love the November Project. THERE. I SAID IT. And I love working out with people. And I’m not ashamed to get better at exercising in front of people, because I realized how backwards that sounds. I’ll let people see my progress, because it puts a smile on my face when I see theirs. We’ll all progress together, at whatever pace we so choose. So come join us, because even if you do terribly at your first NP, and even if you throw up, you’ll be fine, because I already did that, and I turned out just fine, didn’t I?