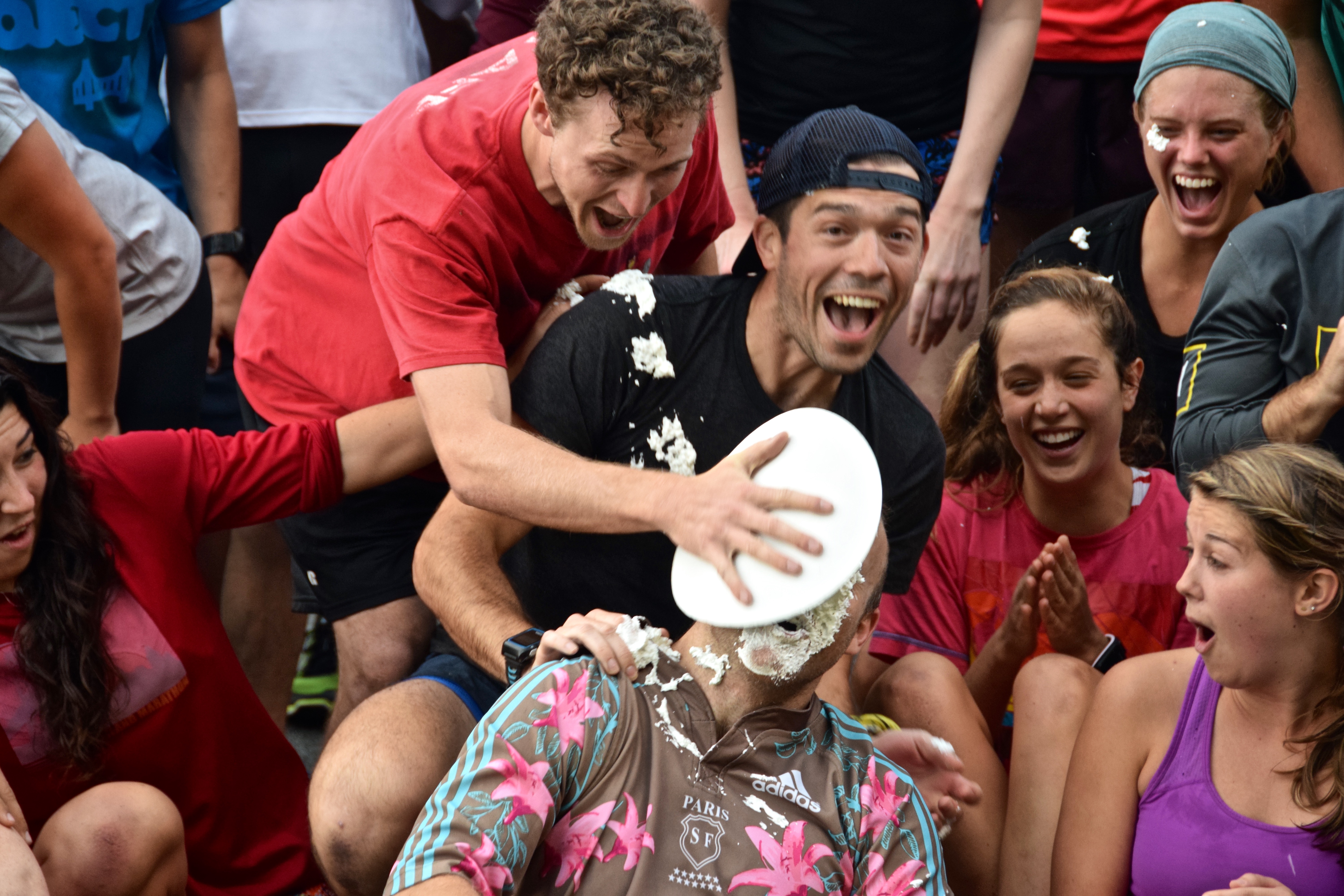 This morning we gave the positivity award to our favorite frenchman, Jean-Michel Boujon! As he said in his speech, it only took 3 years for him to get recognition for his positivity, so keep your head up and you too may get the PA one day! In all seriousness, JMB has been a pillar of NPSF and the crush-the-workout-yet-laugh-at-everything vibe we have had since day 1. Many people come back each week just to get a JMB hug and joke, two things that instantly start your day on the right foot.

At the beginning of the week, we sent out a message to the original NPSF crew from 2013 to fill them in on our PA plan. After 3 1/2 years of workouts, marriages, tragedies, and many beers, this core crew (even if they don’t show up often anymore) are very much a wonderfully dysfunctional family, and they showed it this morning by congratulating JMB with a pie to the face. I love how twisted we are.

Since I am not the only fan girl, I reached out to some of the 2013 core to get their favorite memory or one liner from Jean Michel over the years:

“The first time I met JMB, we instantly got off on the right track in a language we both could understand with our broken English. He has wearing a Stade Francais jersey, so I mocked him claiming Ireland were a better rugby team. I was wearing an Ireland shirt, so he soon corrected me about the various drubbings French teams gave Ireland teams that year. Mutual love of communicating friendship through mockery, dark humour and sarcasm. I like this kid.

Over the next three years, many scoot trips to the Headlands, full Irish breakfasts for rugby games and countless NP sessions, I can safely say JMB has been one of the mainstays of my time so far in the Bay… making it enjoyable and easy for a fellow foreigner to integrate. Thank you for your humour, your dry wit, your constant availability to help out friends in need… and of course rides on the scoot. Allez les bleus, Seany Mike!”- Paddy

“I honestly can’t remember the first time I met JMB. But what I can remember is the first bike excursion we went on together. We were biking to Point Reyes with a bunch of other NP people. When we met up to start the ride I saw him on this mountain bike. I thought it might have been a mistake since we were about to ride 50+ miles on the road. But soon after we got going I was aware that it didn’t much matter what bike he was on. He was crushing everyone on his bike that wasn’t even meant for the road. When we stopped to snack or drink water I made some comment on how fast he was going and he just made that JMB face where he kind of shrugs and raises an eyebrow at the same time. Oh and he made one of those funny noises with his mouth. All in all I’d say it was a pretty accurate preview of how I’ve come to know him: funny, humble, and great at making weird noises with his mouth.”- Zip

“Jean-Michel taught me the importance of teamwork. Yeah individually we are all pretty baller but when we work together we can accomplish anything.

Thanksgiving 2013 Sam Livermore invited us to have dinner with her family and Jean-michelle and I made a bet of who can get her family to “like” us the most. The focus was more on the ladies in her family. I put down the classic Latino love mixed with stories of family, salsa dancing, hot days at the beach and how much love I have for my mom….the shit was heavy and working. I thought I had the lead. Jean-Michelle through a curve ball and brought food from his garden, created dishes that I couldn’t even pronounce, put a little extra on his accent and held the wine glass with what looked like only two fingers. I was pissed! I would say we committed 3 hours of that evening battling it out. As the night was coming to an end I can see we were both counting on our fingers. Both of us trying to figure out which one of us was the winner. Then it happened! ”Oh Dan, you don’t have to do that. Thats so nice of you”. All heads turned to the kitchen and I that point I realized we fucked up. Clayton pulled some classic white boy shit and started to wash the dishes. Dan Clayton looked at both of us, lifted his chin and a gave a big GFY wink. LESSON LEARNED”- Jorge Moreno

“Jean-Michel (seanny Mike – European spelling ) is so bad ass he has even got his own gang called gangfracais. for those who don’t speak French when translatedtranslated it’s French gang).  He is such a stud muffin that he carries a second helmet around for a scooter that is clearly meant for a discerning lady and then ride s like he owns the streets on his scooter.  He’s also kind as fuck. Xo”- Lindsay Bolt

“My all-time favorite, from back I. The days of Alamo Square NP Wednesdays:

“JBM is a grown ass man. He has no qualms flirting with the aunts, laughing is ass off at inappropriate and obscene comedy late late at night, and helps his girlfriend make kombucha in his kitchen. He’s a hardworking dude who really takes a serious bite out of life and we all should aspire to be like him!

Oh yea he works out too. Hahaha”- Sam Livermore

“The first time I met JM we had to turn to someone we didn’t know, introduce ourselves, and share an interesting fact.

After I shared that I had 4 inch screws in each of my hips, he looks me in the eye and says “I’m French.”- Rebecca Daniels

“I don’t have a favourite one liner for JMB but every time I think of him, I see his eyebrow wiggle, followed by two tongue clicks and a wink

“Seanie Mike from the very beginning has been one of my favorites of NP… You can always count on him for a big sweaty hug, and a joke that you aren’t quite sure you understand but laugh anyways bc it’s in a French accent”- Erin Hallett