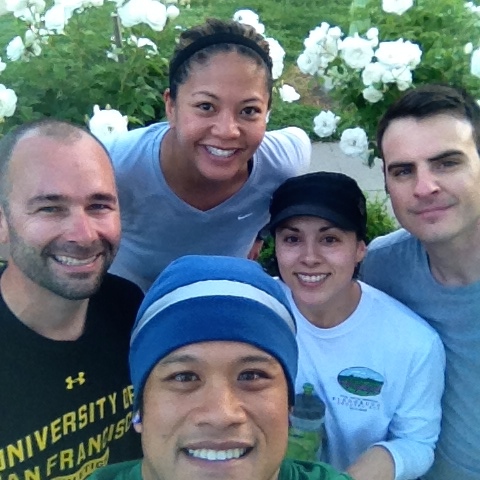 With the beautiful Spring weather around us, it is time to get dirty and completely soaked with sweat. There is no greater thing than puddles and puddles of salty sweat and the smell of ass after a morning workout. Okay maybe a bit exaggerated, but you get the point.

The tribe of Sacramento has started to pick-up it’s steam with a cast of regular and familiar faces, though after today’s farewell, clearly some co-leaders know the tribe better than others. Co-leader Stephanie said farewell to Kevin, though there was no Kevin in the group. Perhaps the series of jump squats, lunges, crunches, leg thrust, mountain climbers, plans and jump-n-jacks made her delirious after the workout.

After the 6:29 arrival of the Sacramento Tribe, Co-leader Haley mustered up another awesome workout after a 1-mile warm-up with the exercises listed above. Co-leader Chris opted to half-ass the workouts to serve as photographer for the day. With some high-fives, hi’s and fist bumps, the group was ready to jump into action.

The workout went by quickly as most of the routine was performed in front of the McKinley Library, a staple of Sacramento views and locations. With the amount of buzz on Twitter and Facebook we are still confused on why people cannot make their way out to McKinley Park at 6:29AM on a Wednesday when they show so much interest on Social Media. GET UP GET OUT AND GET WORKINGOUT FOR FREE! JUST SHOW UP!

On a final note, good luck to all of you running the Boston Marathon on April 21!