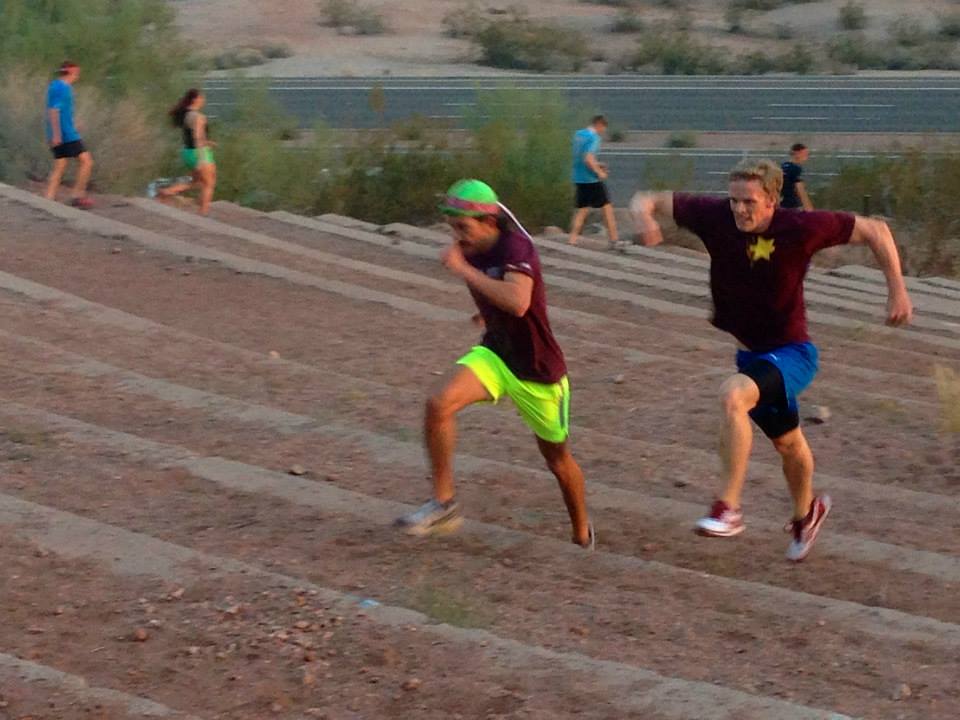 “I climbed some stairs at Papago.  Just to watch them die.” -Rick

There really isn’t anything more representative of The Wild West than a good old fashioned duel in the desert and there isn’t a duel more infamous in Arizona than that of The Gunfight at the OK Corral. So, in the true spirit of the American West and under the watchful eye of Wyatt Earp, the best-known frontier lawmen of the American West, the tribe dueled it out.

For our take on Race Man inspired by our boy Wyatt and The Gunfight at the OK Corral, the tribe was split into lawmen and outlaws. At high noon (aka 6 am) the tribe members “called out” an individual from the opposite side of the law for a duel to the top of the stairs. The winners went off to find their next victim and the losers went off for some pushups before returning to the battlefield.

The reputations of the winners, like that of the infamous gunslingers, spread by word of mouth (most mine) resulting in some seriously competitive duels. I have never seen the tribe move so fast. It was incredible really. I think almost everyone surprised themselves at how fast they could go when challenged and I might be overzealous here, but it was a big day for our tribe.

1. Next week is PR week again and after this week you should know who to “gun” for.

2. Next week we will be taking some epic yearbook photos of each of you. Don’t worry, you will still be getting your PR workout in. Since this is our first time doing this and you might not know what we are talking about check out DC’s photos from last year here.

3. Next Week we are voting for the official name of our beloved Saguaro. So come prepared to vote. Check out the rationale behind our choices here.  A quick recap of the options is listed below.

Thunder Dan was with us on our first PR day. With the fastest male and female being those who most personified the same hustle and determination that Thunder Dan did when he was a player, he was the perfect inspiration.

Rose Mofford built her entire political career on the idea of the #verbal commitment. When she said she was going to do something she did it. True to form, when some of the tribe went missing Rose was there. She is NP. At 93 years of age she still stands behind #freefitness #community and a solid #verbal commitment.

This chick had heart and so do our members. She wouldn’t let anything stop her from performing and on the hottest and most humid workout we’ve had thus far she proved that weather too couldn’t stop her #weatherproof.

Wyatt is by far the most infamous duel winner in all of Arizona and there wasn’t anyone better to oversee our first duel in the desert. If anyone knows how to throw down – it’s this guy. We could duel it out in his honor on the regular. Plus, Wyatt is just a good name for a cactus.

So there you have it – voting, photos, and racing next week.