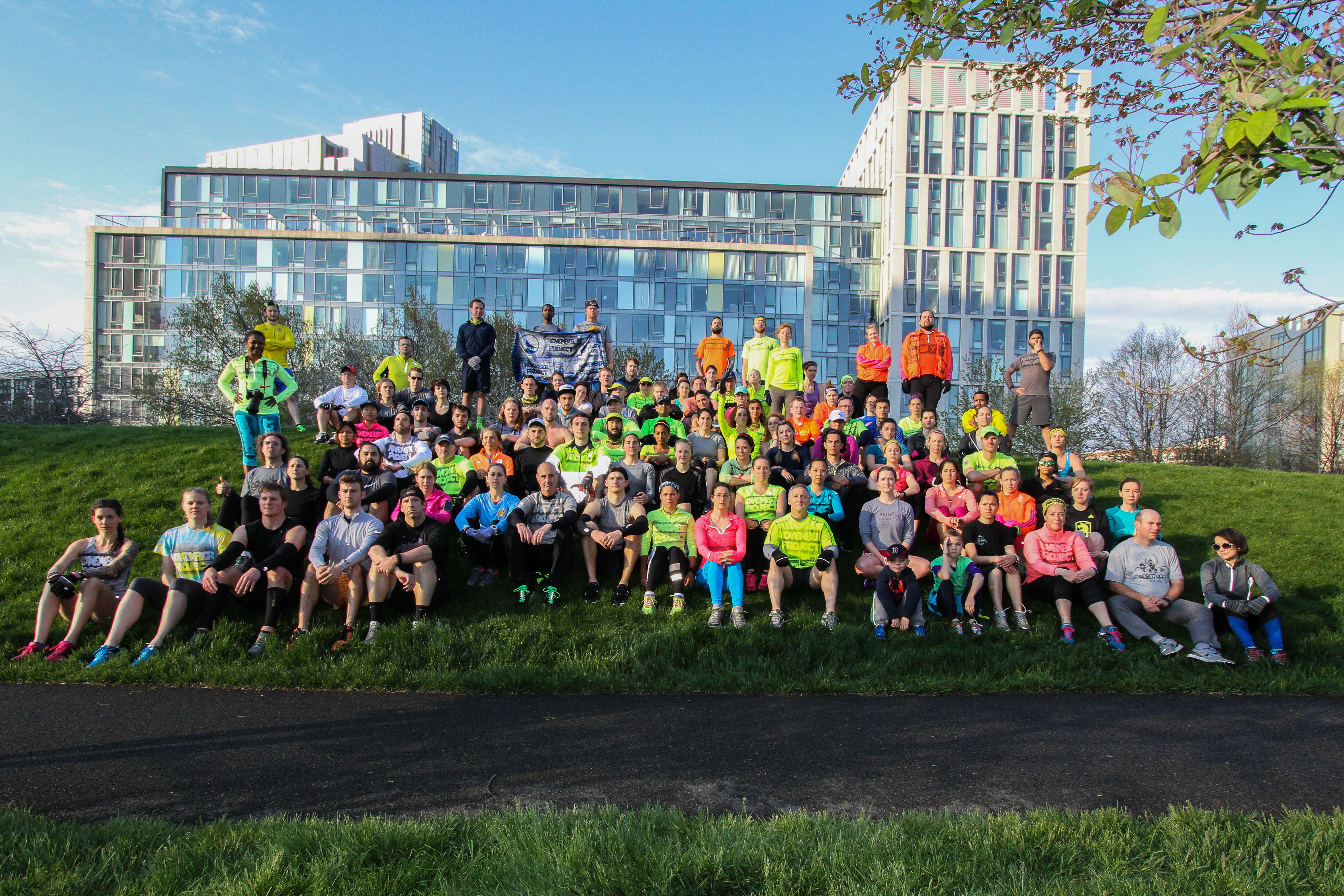 Just in case anyone missed the memo…or the IG posts…or the wave of excited, giddy, child-like gleeful social media posts about Boston’s Destination Deck workout this morning, this happened:

WE PLAYED CAPTURE THE FLAG.

Some call it fitness.  Some call it recess.  Some never knew that the old school-yard / camp game that makes for legendary stories so many years later could be so much fun, especially as adults, so many years later.  Unless you’re Justin Hewett who was in elementary school last year, it’s likely most of us haven’t sprinted for the flag, dived out of the reach of an aggressive tagger, or rescued stranded teammates from jail in quite a long time.  But we did it.  We got weird.  We got competitive, aggressive, and deeply playful as we did all of those things this morning.  We moved a lot and if you were lucky enough to get caught and sent to jail, you also did a classic Deck of Cards in jail until rescued, and then you did lunges alllllll the way back to your team’s side.  Team Thunder wore black/grey clothes.  Team Lightening wore neon/bright clothes.  And the “storm clouds rolling in”***  aka #EmC2 were taggers who doled out burpees to anyone standing still for too long.  We’re pretty sure that we had way more fun than we had fitness, and that is A-ok with the three of us.  We had more fun than we’ve had in a long time, which is saying a lot, because Capozzi only has three gears: I’m having fun!  I’m having so much fun I just peed a little!  and HOLY SHIT I’m having so much fun…I’m Capozziiiiiiing! It was the best of recess, the best of this awesome Tribe, and the best of Monday morning Destination Deck surprises.

Well, it was for us.

But let me tell you Dave’s* story about this morning.  Dave lives across the street from the North Point Park in Cambridge and he has one day off each week.  Monday.  When he laid his tired head down on Sunday night, he was looking forward to sleeping in Monday morning while the world went about its busyness.  Unfortunately for Dave, the Tribe assembled, all geared up in their black & neon, and the ritual ruckus at 6:30am woke him from his much needed slumber.  Dave looked out his window to see chaos.  Adults running like children through the park, diving down hills, leaping across crevasses, barreling through rows of trees and sprinting across open grass.  Not to mention giant packs of people all dressed similarly moving like robots through sets of pushups, situps and lunges (#notacult).  He was confused.  He was tired and annoyed like a bear being woken a little too early from his long winter nap.  He was worried that all the landscaping he and his neighbors had intentionally paid for and organized to be done in the park would be destroyed with the seemingly-careless antics of the ridiculous mob in the park.  So Dave made a bold, respectable move.  Dave came down to see who the fuck these people were, and what the fuck they were doing, and why the fuck they were in his park.  He was rational enough to have a legitimate conversation–and he equally respected and appreciated what this mob of movement called November Project was doing in his park, on his day off, while he was trying to sleep.  He could see the good in it.  But he was seeing, feeling, and expressing a little more of what was ruining his morning about it.

This is what we call Collateral Damage.  Dave got the short end of the NP stick this morning.  Remember all those words I used to describe our tribe this morning?  Happy, excited, fun, giddy, child-like, playful, and you know the rest of the words you’ll be using all day to talk about the weirdness that was recess-at-6:30am.  Well those weren’t necessarily the words Dave will use.  Did we ruin Dave’s day? I don’t think so, and I sincerely hope not.  I did my very best to assure him that we understood his concerns.  I apologized for waking him up and disrupting his morning, and I promised that we only intended to get some fitness, for free, in the public park and we would respectfully use the park just like we do every other spot we gather in our incredible city.  I also told him we were leaving as soon as the game was over.  We exchanged names, two handshakes, and yes, a hug.  But yeah, Dave had a different experience than we did.  Do we feel excited about Dave as collateral damage?  Nope.  It happens sometimes and we try to minimize it.  But it’s important to know that we, as a tribe, make a mark.  We have an impact.  We are a force in this city.

I would like to propose that we always strive to leave Collateral good.  Collateral benefit.  Collateral Kindness.  This idea is that we not only say hi and invite onlookers to join us or non-creepily recruit the other early morning jogger to join you for hills or a cool workout you’re going to.  Collateral kindness is the idea that we are kind in ways that spread ripples of positivity, even if the people affected by it don’t even know it happened.  It’s both using a park in ways that don’t destroy it and even leaving it better than we found it.  It’s both inviting people in to join us and also being curious about what they do for fitness.  Because NP isn’t actually about getting the whole world to join NP, it’s about getting the whole world moving, getting fitter, and having more fun while doing it.  NP may not be the only answer for every single person, so we can certainly help and encourage them to get in motion.  Stay in motion.  Enjoy the motion.  Collateral kindness is also the idea that we simply spread to others the kindness we have because all of our days are made when we start them with NP.  Help make Monday, and Wednesday, and Friday be the best day of the week for others too.  We have it to share because there’s always room for more, not because we sucked up the good from others who collaterally had their morning squashed.

I didn’t realize it until I started writing this blog, but one final example of the Collateral Damage/Kindness dichotomy is our parking situation at Harvard.  There was Collateral Damage when so many of us parking in all the permitted spots at Harvard stadium resulted in the employees who actually pay $thousands each year to have that permitted spot were arriving on Wednesday morning with no where to park.  Hence Wed felt like the biggest UPPER of the week for us, and a day of dread for those who needed to park for work.  Collateral Kindness is just parking where everyone is allowed to, paying the little fee, or parking elsewhere, biking, walking, or running to the stadium.

We’re not better than everyone else because we’re November Project–we simply strive to make EVERYONE better because of this amazing vibe and the power of this free fitness movement.

This movement is weird and powerful.

***see Chris Capozzi’s facebook post from Feb 25, 2016 for the full story on Thunder, Lightening, and the Storm Clouds Rolling In.

*”Dave’s” name has been changed to protect his identity.