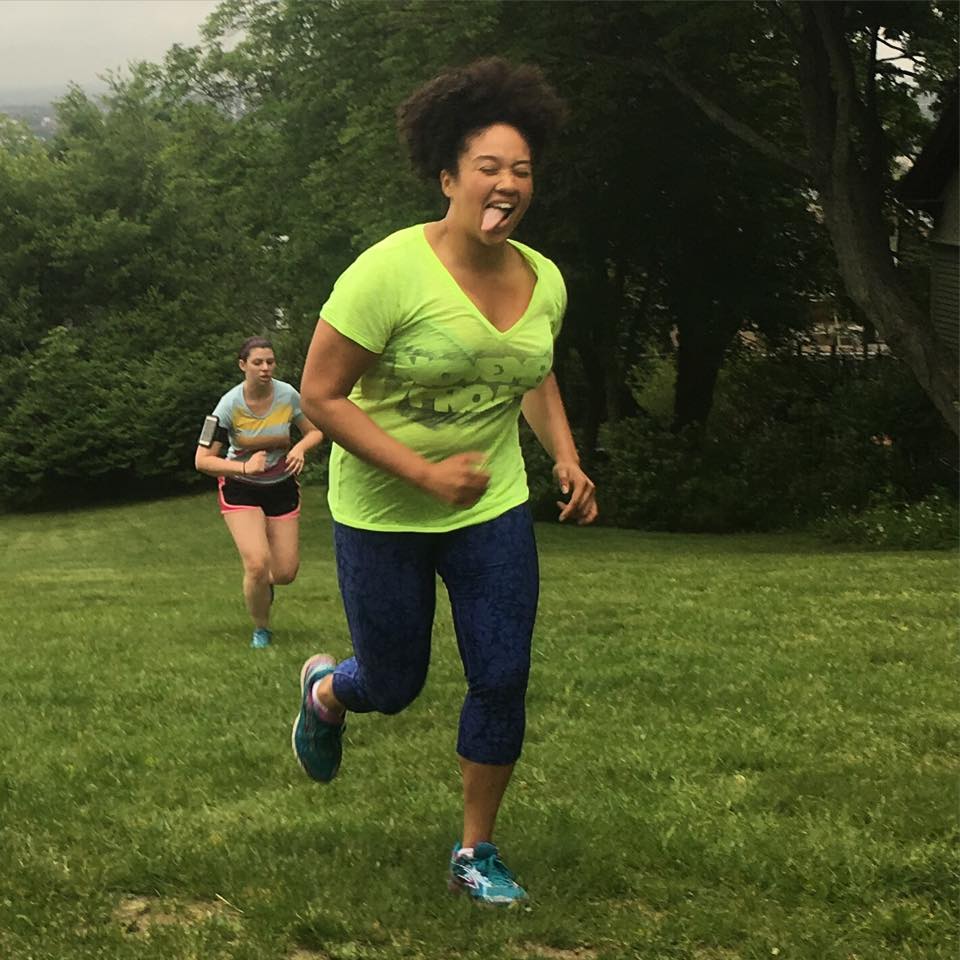 This morning on Summit Avenue, we gathered, bounced on the NEW side of the street (so the grass can grow by the wall) and then we ran Full Frontals (the entire front hill + Cross Country spice) for as many repeats as we could before 7:20.  We  sang a really fast version of “Happy Birthday” while Jake danced like a leprechaun, (#fuckyeah that happened), honored Cristina who has graced the tribe with her love and positivity before returning to Ecuador, and we took some cute photos of cute children.  We hugged and lingered, and had the rest of a Friday.  It was normal, not normal, awesome, and the best way to earn our weekend.

We still miss Capozzi, who is recovering from his surgery.  So the 2/3s of #EmC2 in attendance posted on IG a photo of a badass woman who was getting the free-est of fitness with her tongue sticking out.  She happened to be in the right place at the right time with the right expression on her face to be representing all of #NP_BOS on social media today.  We like Melissa.  And then, by coincidence, Melissa announced on another form of social media that today is her NP Birthday.  Her NPversary.  Three years ago today, she showed up for her first time to November Project.  Here’s what she said: Yall. THREE years ago today, I joined this quirky, crazy, loving tribe that has in so many ways pushed me out of my comfort zone. I had a HARD time with Boston when I first moved here but the consistency, the drive, and the unwavering free love of all the members of November Project has mad me a proud Bostonian (who stands entirely too closely to people in crowds). ‪#‎Love‬ ‪#‎thetribeisstrong‬ ‪#‎justshowup‬

So what’s the likelihood that today Melissa has her NP Birthday anniversary AND she’s on IG?  Who the fuck knows, but it’s cool little coincidence.

Also, who knew that Melissa has been around our fierce tribe for 3 years? She’s awesome.  Badass.  And one of those people who shows up to the #shovelcrew and all the cool stuff.  Chances are many of us don’t know Melissa as well as we could.  And chances are there are lots…and LOTS of people who’ve been around for longer than you realize, who you don’t know as well as you could.

So there it is. Know people, meet people, learn more about them.  Find out when they started.  Find out where they live.  Find out the last workout they came to and make it a point to see them at the next one.  Maybe you meet someone by coincidence, but let that make your community bigger.  People say #FILTT, which means #FuckIloveThisTribe.  They don’t say it by coincidence, it’s because they get out there and get busy knowing people.

Have a great weekend NP_Boston.

The Monday Destination Deck is in Somerville at Lincoln Park.  Make sure you’re there.  It IS the location where we did a double Sebastian last fall.  We will NOT be doing a double Sebastian.  (probably)  Exact location and #verbal in the tracker.