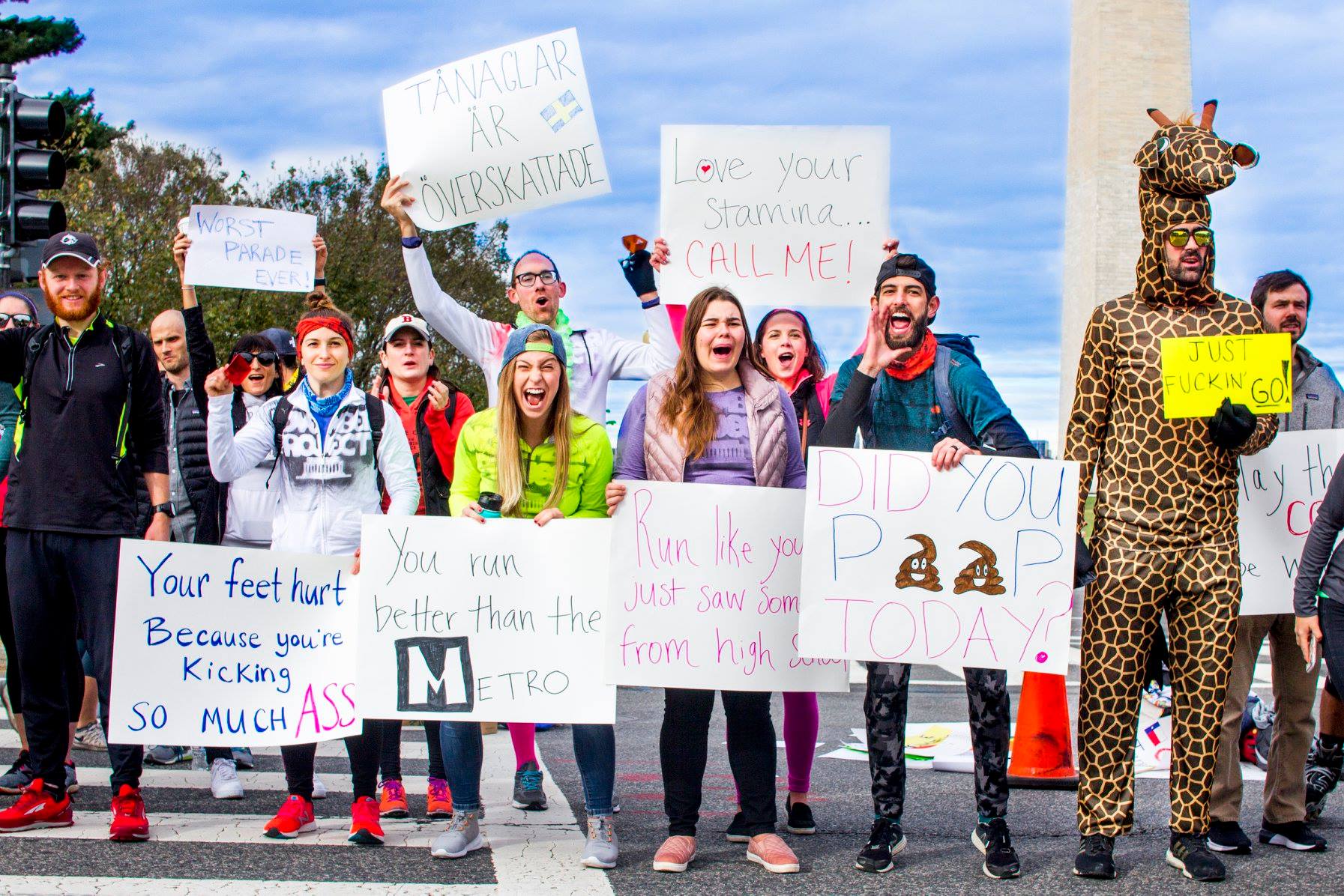 Dear reader,
Sunday, October 27, has been marked on your calendar for the better part of a year. You’ve put in the hours. You’ve put in the training. And now it’s finally here — you’re ready to hold a sign, shake a cowbell, and scream for runners at the 2019 Marine Corps Marathon.

Congrats on making it to this point.

All jokes aside, while many of us who are NOT running an upcoming marathon have been sleeping in on the weekends and having a social life, these runners have been busting their asses for months to train for this race (among all the other marathons this fall). Now it’s our turn to put in some WORK and cheer on the runners with every ounce of energy that we’ve got!

Just how important is the MCM November Project cheer station? VERY. Read these real-life accounts of past MCM runners and how the cheer station impacted their race. TLDR: Cheer station = good shit.

Chris Jolly (2017)
I’ll never forget running my first marathon, which was Marine Corps Marathon. Getting to the NP cheer station and having Maria jumping up and down. Everyone else was cheering loudly; that is something I’ll never forget.

Emma Cowan-Young (2017)
MCM was my first marathon and I ran it with my Dad. Full disclosure: he could have finished it an hour-plus faster had he not stayed with me (thanks, Dad). On race day, my body was like, “Hey, you know what would make this more exciting? LEG CRAMPS!” From miles 14-18, my Dad kept saying, “Let’s just get to the NP cheer station, we’re so close.” Without the cheer station push before the bridge, I’m honestly not sure if I would have finished that race. Forever thankful for that rush of energy.

Scott Young, aka Emma’s Dad (2017)
It’s mile 18 and the legs are starting to get tired. You round a corner and there’s the November Project crew to give you that lift you need. I was quite taken aback by the number of November Project people that came, and their overwhelming enthusiasm as I passed by.

Carrie Clowney (2017, 2018)
I was determined to get to the cheer station in 2018. I was definitely not motivated by the serious FOMO I had over everyone else having awesome cheer station photos from the previous year and me only having one of my butt. You will probably get an awesome new profile picture courtesy of some kind soul at the cheer station. In 2018 I hit a wall around mile 15 and threw a hissy fit (because I’m totally an adult). I’m pretty sure the only thing that kept me going, besides a scolding from Anne, was knowing how badly I wanted to see the cheer station. I kept going, and I did get to see the cheer station. I can’t tell you whose hands I slapped or what anyone said to me, but I can tell you it was the highlight of my race.

Brian Brussel (2016, 2018)
First time at MCM, felt great, high-fived everyone, pretended I was an airplane, and left with a huge smile on my face. The adrenaline from the cheer station powered me through the quietest, toughest miles over the bridge. Set a huge marathon PR. (Also got an absurd number of compliments on my Magic Mike costume, mostly from middle-aged women.)

In 2018, I ran an awesome first 18 miles and then completely hit the wall. Entered the aid station having just destroyed a porta-potty. Completely drained of energy, as evidenced by the picture in which my vague emotional state is dying. Couldn’t wait for a huge group hug and a rest break to chat for even a few seconds with amazing NP friends. Dazzo in her infinite wisdom realizes that during said hug I am no longer supporting my own body weight and throws my sorry ass back on to the course. Grant pitied me enough that he proceeded to shepherd me in the right direction for most of the final miles. Moral of the story: NP cheer station is amazing whether you’re having a good race, having a bad race, and even better if you’re a part of the cheer station and don’t have to run for hours.

Lauren Smith (2018)
The miles around the mall felt like being in a parade, mostly because I knew right before the bridge at mile 18 I’d see NP cheering! I got to run the whole race with a training buddy, and we kept saying to each other ‘we can’t wait for mile 18!!’ The bridge was so tough but we felt empowered because of NP’s support right before it.

Melani Robinson (2017)
The cheer station at MCM was something I was looking forward to for miles. It was the boost I needed to get me over that bridge and to the finish line. Being able to stop and hug my support system and see the ones who have reinforced me throughout training was emotional. By mile 18.5 my feet were concrete bricks and the cheer station was one of the only things getting them to move. Also peep my concerned father.

Casey Forgey (2018)
After running the first 18.5 miles straight, I wanted to walk so badly but I saw the NP cheer station and they kept me going and gave me the boost I needed to finish the race.

Kuang Li (2017)
In 2017, I remember coming up on the cheer station and thinking to  myself “Finally! I can get rid of this sign!” I carried it for 19 miles before throwing it at the first person that I saw at the cheer station. This is also the first time that I broke 4 hours.

Phil Houston (2018)
The 2018 MCM was my first 26.2. The first 15ish miles went at a great pace with Anne, Betty, and Carrie. Then I wished them the best and on came the unexpected detour to the porta-potties. After this detour, my legs decided that they were just done for the day. Miles 16 and 17 along the mall were done mostly at a walking pace … Then another NP member from another city reminded me just in front of the Capitol that mile 18 was just ahead …Then I thought to myself, only about a mile to the NP cheer station, you better get your ass moving because you didn’t come this far to walk to the cheer station … that was just what I needed to get my legs moving again, experience the euphoric high that is the cheer station, and finish.

Misha Strage (2017, 2018)
In 2018, it was my second time running MCM but my first time running it living in DC and actually knowing people on the course. I was having a great race but after 16 miles things started to hurt. I knew i just had to make it 2 more miles before I got to see friendly faces – the NP cheer station. I was waiting for it. And it was better than anything I could have imagined. They were so loud and supportive and friendly, familiar faces cheering my name. It was awesome – I was smiling ear to ear approaching the group. And to make it even better, I had my very own pit crew with Advil and apple sauce waiting for me. It was the best thing a girl could ask for. And I can’t wait to see the cheer station this year!

Anne Ornelis (2018)
In 2017, I was a whole two months into living in DC and embracing NP. I wasn’t new to making fun signs and cheering until I lost my voice for big races — but cheering with NP was something else entirely! From the fast front of the pack to those walking, everyone got a high five or cheer as they ran by. It was amazing watching the huge smiles from runners passing by this big group of incredible humans! In 2018, I somehow, accidentally inherited a bib and was running MCM three weeks after Chicago, but for the first time running with friends (that I met through NP). Passing the cheer station lived up to everything as a runner that I had remembered as a spectator the year before. Moral of the MCM NP Cheer Station: put one foot in front of the other until ya see it, and then you’ll be flying right on to the finish with a huge smile on your face.

Convinced yet? Show up. Be loud. Be weird. Be November Project DC.

So much love for ya, DC.