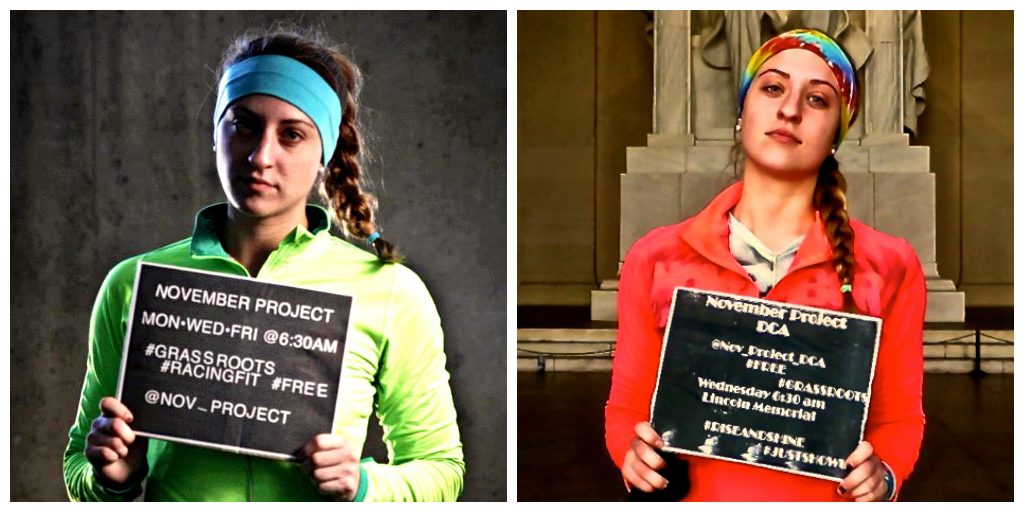 With the Tribe expanding to the #PowerfulX, this blogpost comes from a two city staple, Celena Dopart. Celena was born and raised in the Nation’s Capital and is currently getting her master’s in aeronautics and astronautics at MIT (Turbo-fucking-Smart) doing a thesis on astronaut jet packs and how to best levitate from stadium section to stadium section. Celena made a big impression on the DC tribe during holiday break, continually bringing energy, smiles, and New England style hugs (still pushing for the hips to be in here in DC).  Now that tribes are popping up to the left, right, north, and south (maybe Celena will get us to the moon on day as well), #justshowup on vacation, or on business, or to see the SD hotties. Whatever the reason is, keep sculpting your ass and supporting the world take over movement. Here’s Celena’s take on the life of a two tribe woman. -DM

I’m pretty pissed that I didn’t discover November Project sooner. I moved to Cambridge in August 2012 to start my master’s, but didn’t find out about this awesome community until a few months ago. A friend who doesn’t even live here heard about NP through the grapevine, sent me the link to this site one Sunday, and after spending all day obsessively watching promo videos, scrolling through pictures, and reading blog posts, I showed up the next day—November 4, 2013—absolutely pumped for the first Monday of Baller November. The first thing Brogan had us do that day? Grab a stranger’s ass.

Except for the first Friday, I haven’t skipped a workout I’ve been in town for—which, weirdly enough includes when I was out of town. I’m from DC, born and raised (and I mean actual DC, not Northern Virginia or Bethesda… posers) and when I realized there was a new NP tribe in DC I was fuckin’ STOKED.

I immediately checked my previously booked Thanksgiving airline reservations to see if I’d be home for the Wednesday morning workout. Thank goodness for a premature case of grad school senioritis, because I had already committed to skipping my Wednesday class to fly home Tuesday night. I had only been going to workouts in Boston a mere three weeks at that point, but as I told people: the honeymoon stage hadn’t yet worn off.* Like the dork I am, I bought the newly released Runner’s World at Logan and carried it through the airport feeling like it was a badge of honor—yeah I’m buying this issue, yeah you see my running shoes hanging off my backpack, YEAH I’M A MEMBER OF THE TRIBE. Want a hug?

By the night before my first DC workout, I’m pretty sure I had traverbaled** at least a hundred times via various modes of communication. I couldn’t wait to meet a WHOLE NEW TRIBE! I popped out of bed that Wednesday morning and literally bounded out the door for the 4.1-mile run to the Lincoln. I think I was so excited that I ran faster than usual (plus, it’s downhill the whole way there) so I got to the memorial early.

Now here’s where NP DC differs from Boston. You get to a workout 20 minutes early in Boston and there are already 25+ people there waiting and stretching—or, if it’s Wednesday, 100+ people finishing up their workout.

…There were four people running up and down the Lincoln steps finishing up the 5:30 workout, and no one else in sight. Wait, what?!?

But this is what I’ve come to love about NP DC. The tribe has the same vibe, with just a slightly different flavor. It has the same incredible energy and motivation driving it, but at this stage it’s still smaller and has a little bit more of a personal feeling. I missed that whole phase of NP Boston (guys, WHY didn’t you recruit me earlier?) so it’s been really amazing to be a part of the initial growth of the DC tribe. I’ve met some great people at NP Boston, but sometimes I’ll go an entire workout without seeing them because of the enormous crowd. That doesn’t happen as often in DC.

Anyway, I came back to Boston after Thanksgiving, showed off my new Lincoln-tagged #GrassrootsGear for a few weeks, and at the end of the semester headed back to DC for an undecided amount of time for the holidays. I finished the last class required for my master’s in December, so with just my thesis work left I didn’t have a date I needed to be back in Boston. I ended up staying for almost a month before vacation guilt caught up with me and I couldn’t avoid my research any longer. But while I was home, I showed up—for mugshots with Abe, wearing a Santa hat on Christmas, hungover on New Year’s, bundled up at the inaugural #DestinationDeck, with two kickass friends in tow on the coldest day of the year, and slipping and sliding my way to Union Station—to every workout (and happy hour), where I’d have at least one NPDCer exclaim, “Wait, you’re STILL here?!?!”

Now Boston, don’t get jealous, you’re still my favorite (shhh, don’t tell Danny and Steve) and I’ll be seeing you as often as possible until next time I head home—I was back for my first two Boston workouts of 2014 this week. Some of you may have seen me at Harvard Stadium on Wednesday and Summit Ave this past Friday morning holding the DC Positivity Oar hostage… I have sad news: he’s been rescued and is heading back to DC this week. I’m not too worried though; we have more than enough positivity around here!

And all that positivity is precisely what keeps me coming three times a week, and you know just as well as I do that after a workout the positivity and energy stays with you—to work, to school, to Tuesdays, to Thursdays, to weekends. With graduation creeping up on me, I’m applying to jobs both around the country and abroad. Some of these places have a tribe, some don’t. But with three new cities joining the movement this week, I’m absolutely positive that wherever I end up will eventually have one. And lucky me—in the meantime, I get to split my time between my two incredible home tribes!

*It still hasn’t. People said it would get harder the darker and colder it got, but I’m a firm believer in what BG described recently as “the worse the weather, the better the memory.” I get so much more excited for a workout if I look at the weather the night before and it says it’s gonna be record lows or a torrential downpour – case in point: #SceneBeSeen, seven minutes of basketball court puddle burpees, Bojans in the mud. Yeah I might be cold and wet, but I’ve got a goofy grin on my face, and I feel a stronger connection with those other fools out there who are just as happy as I am to be challenged not just by the workout, but also by the weather. Plus, bragging rights.

**My portmanteau for “travel verbal.” Now that we have 10 cities, can this officially be a new addition to NP vocab? I REALLY dig it.