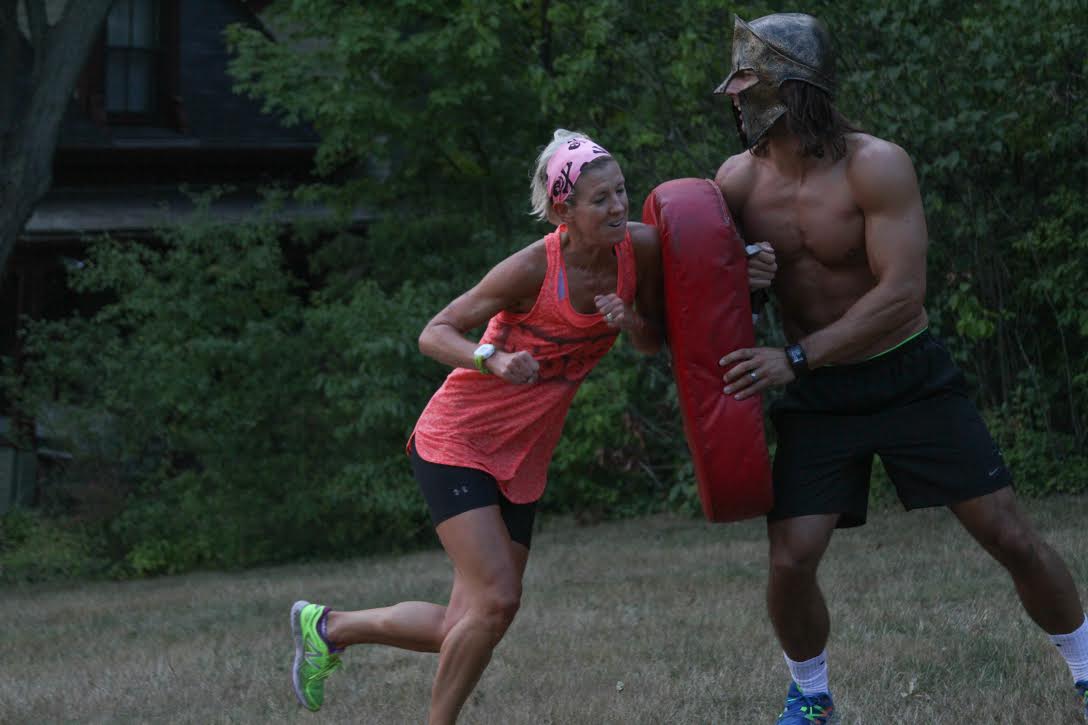 Not only did Bridget Hanahan Brown not know she was going to receive the Positivity Award this morning, she didn’t know she was going to be our guest blogger today.  This woman is fast and fierce, and deeply humble about how hard she works.  She shows the fuck up and she works her ass off.  She works her face off.  She works her heart out.  At the end of workouts she’s basically a pile of organs with some hurled up puke on top.  That’s super gross but Bridget is not.  She’s awesome and we love her.  She reminds us how lucky Boston is to be F I L L E D with badass and awesome human beings who make up the Tribe.  Read Bridget’s words, and then get to know Bridget.  Run with Bridget or chase after her.  You’ll probably end up a better runner and a more “gracious athlete” too.

[This is Bridget’s personal message to the Boston tribe coleaders, which I’m sure she thought was private but then we went ahead and posted]:

YOU GUYS. I wanted to drop a quick note because I was literally speechless this morning. And that doesn’t happen often. I felt like I won an Oscar but didn’t have a speech prepared because I didn’t even know I was nominated. BUT. I wanted the three of you to know how honored and stoked I am to be a recipient of the Positivity Award. And that’s because this tribe means so much to me. This tribe has helped me become a better runner, a more gracious athlete, and has surrounded me with some of the kindest, most positive people I’ve ever met, which makes me work harder to try to be kinder and more positive too in everything I do. And I know that *so much* of that stems from the leadership. You guys are killing it. No matter what head space I’m in when I drag my ass there in the morning, I can’t not walk away smiling after spending some time listening to, watching, and getting cheered on by you three. In case you were ever wondering if this whole NP thing is working — it is. So thank you for everything you’ve given me so far. I love it all. Even when I’m about hurl.

In case you also see some weird pictures of muscled Gladiator characters bruising up the Tribe as we ran “The Gladiator” workout today, which consisted of front hills, cross country spice and Gladiator spice on top of that, lemme explain.  Rather than simply working hard to run up the grassy hill from cross country spice, today you also had to push and pinball bounce your way through the gauntlet of fierce Gladiators holding football blocking pads as you got to the top of the hill.  We promise we took it easy on everyone who opted out of getting hit.  And Dana Bogan (the toughest Gladiator of all time) used all of her 5′ tall firey wrath to take down all those who dared to enter the lion’s den…but it all turned out ok for the group photo.  If you managed to count your hill repeats around the course today, record your number in the tracker.

Is in front of the Cambridge Public Library.  You never know what’s going to happen.  And that’s the very best reason to #JustShowUp.  #Verbal here

Weekend earned, my friends.  Keep being kinder and more positive in everything you do, just like Bridget.