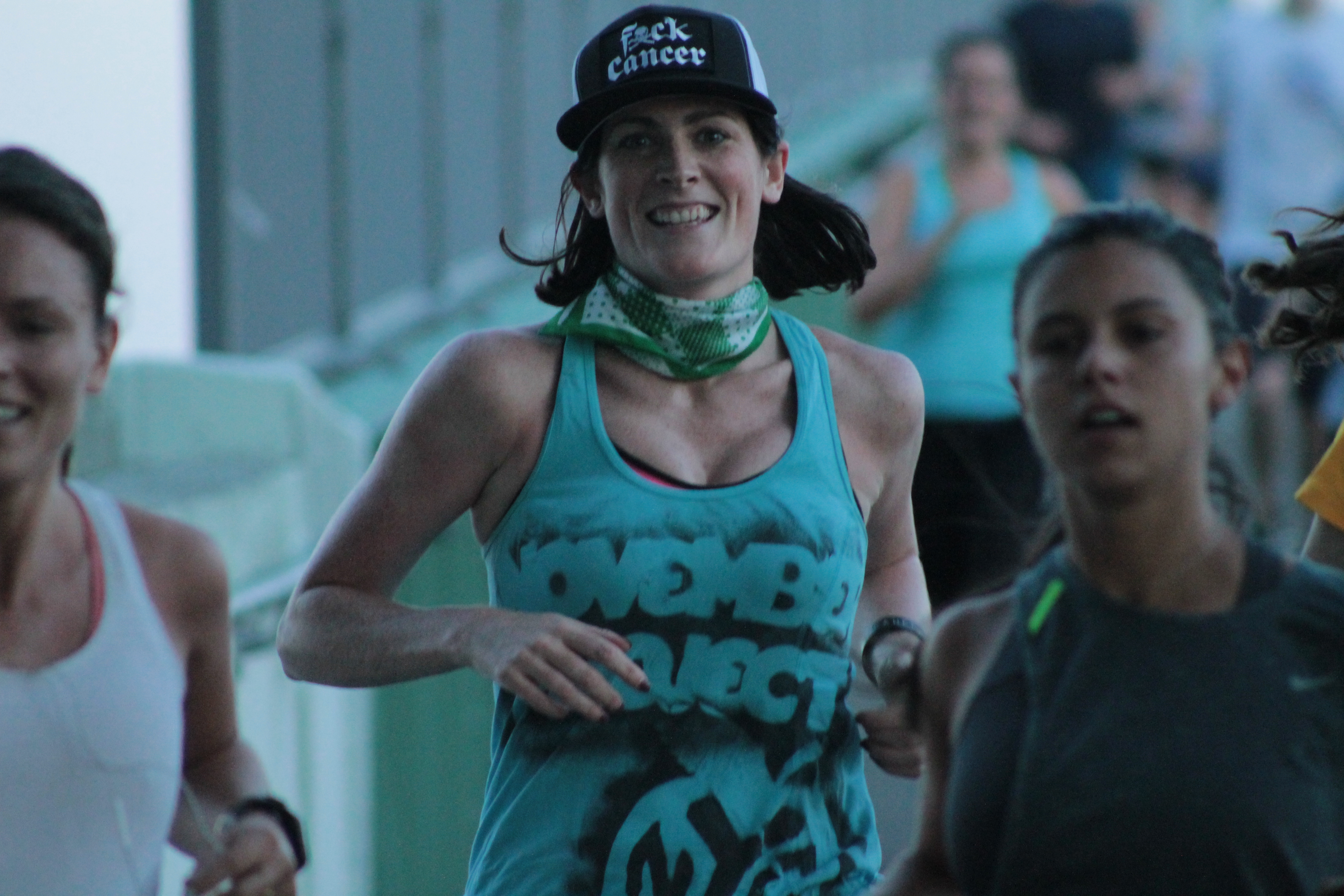 And here is her first blog post….. Take it away Jeanie:

As I was running through the darks streets of Brooklyn this morning, I started to reflect on how I first became a runner. When I was in school, I was pretty lost trying to figure out which sport was right for me. I tried out for many of them, and sadly never got picked. I sat the bench at lots of basketball games. I tried cheerleading, but I wasn’t coordinated or flexible. I could run up and down the soccer field for days, but my best skill was kicking the ball off the field. So I decided maybe I should try cross-country or track and field.  I got my first taste of running at the ripe age of 13, with Coach Buckner at Burner Junior Middle School. He had years of running knowledge and he made it fun. He put a huge emphasis on the fact that everyone made the team. No one got cut.

That got me to eagerly run up to the white sheet of paper posted in the gymnasium. That same day, the cheerleading tryout list was posted, and my name wasn’t there. My heart was broken. So that was it. I was sold.

I began to love running through the trails of Long Island. I loved the long bus rides, and the feeling of the crisp jersey against my skin. I loved that every time we went to a race, everyone was a winner. Even if it took you two hours to finish the race and your bus was the only one still waiting in the parking lot. I felt like a part of a team, and I had instant friends.

I moved on to high school cross-country, where I was on the JV team. Coach Mary was my coach. She ran Division 1 in college and would join our team for runs. She had us write our goals for the season on index cards, and at the end of the year she’d hand us the cards back to see whether we hit our goals or not. Before every race, she would read an inspirational quote, which really cultivated a positive, fun, close-knit team. After one year on the JV team, I earned my spot on the Varsity team. (Take that, cheerleading squad!) I was a sophomore in high school, and I was on Varsity.

I ran Division 3 in college while going to culinary school and built close relationships with my teammates. My classmates called me “track girl,” and thought I was insane to be sleeping in the night before a big race. College was when I realized just how much I loved racing and being part of a team.

Fast-forward to my early 30s, and I hadn’t been part of a team in eight years. I gained a lot of weight from managing restaurants and always having to taste and eat everything. I really missed the running community I had in high school and college.

I tried running with different groups in the city, but didn’t feel like I fit in. Then, on a random, cold afternoon in January, I bumped into Coach John, who was out for a leisurely run in the park. He caught me at a time when I was injured, out of shape, and running through tendinitis in an effort to get back into racing.

At the time, John was pledging for the November Project New York City tribe. He told me all about holding people accountable and forming a community. A light bulb went off in my head. I had been down and out for more than a year. This was what I needed to get out of my funk.

After that, John texted me so many times asking me to #justshowup. Finally, one Thursday night in September, I watched The Biggest Loser and set my alarm for 6 AM the next day. I finally decided to just show up.

And then? Well, I went to the workout, and I loved it — but I didn’t show up again for three weeks! I worked late nights on Tuesdays, and came up with every excuse not to show up to those Wednesday workouts. So John texted again, asking when I was going to come back.

That was it. I showed up at the grotto on a Wednesday morning, came to the following Friday workout, and then there was no stopping me. On that particular Friday, John was away, and it was just #paulleak. I loved his energy. He was competitive and fun, and after the workout I joined Melissa and Rebecca for doughnuts.

I had found an amazing community to be part of. I spray-painted my favorite Lululemon Ta-Ta Tamer and tank top, and started racing with the NP team. I set goals for myself, just like during the Coach Mary days. I had an accountability buddy to hold me to my goals and to race alongside me. It was just like high school, but so much better: My goofy behavior and ridiculous dance moves are encouraged, and the vibe here is positive.

As some of you may know, this past year has been a very challenging one for me with my health. Last summer, I spent a lot of time away from the tribe. It really ate me up inside to be lying in bed, seeing everyone having a fun time working out on playgrounds and attending happy hours.

On July 10, 2015, we met at Bethesda Fountain in Central Park. The workout was one of my favorites. We started with a bounce, as our voices echoed in the tunnel near the fountain. At the end, when we thought the workout was over, we had a “burnout.” We did five burpees, sprinted up a set of stairs in the tunnel, and ran back. It was fast, furious, and hard — and I was the last female standing. (Pete Kruse was officially the last man standing. Good job, Pete.) I left the workout feeling like a million bucks.

Sprinting through that tunnel with everyone screaming my name gave me a boost for the entire day. Meanwhile, I had been waiting all week to hear from my doctor. When I left the workout, I had a voicemail from my doctor saying I needed to come in to get my results. I took a cab across town, where my doctor gave me the news: I had Thyroid Papillary Cancer.

I was flying so high from the workout, and then I got that news. It was so tough to hear. But the support and community at NP was there every step of the way, helping and supporting me. I am now healthy, and I live and thrive off these positive vibes I get from mornings like that one in Central Park.

When John asked me to chat about leadership, my first thought was, “You’re nuts.” I was nervous about the commitment. Then I started to look back at my beginner years as a runner, and this just all made sense.

I thrive on the community that John and Paul built. I love the feeling of always fitting in. Wednesday and Friday mornings are my favorite parts of the week because of all of YOU. The fun never steps, and the memories are constantly building. I look forward to joining the co-leader team and to continuing to build this community with John and Paul.

And hey, maybe one day we’ll have a cheerleader-themed workout.