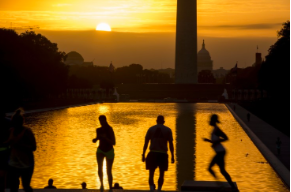 Let’s break it down, chronologically.

For those of you who do not know, this is what we looked like a year ago:

(steve came slightly after this photo for the record)

Then we started bouncing, hopping, jumping up in numbers, vibes, and fitness. We were able to grow at such a quick rate that come January 1, we added Friday’s to our lineup. First Friday seen here from Thomas Circle, Washington, D.C.:

Arctic vortex (I think we can just refer to that as winter?) was a reason for numbers to dip. But they didn’t. In those cold, dark months, when  people hibernate indoors, a group of 100 of us stayed accountable and bonded. Accountability seen here:

Then temperatures started rising. We had our first race outside of 160o Penn Ave where we ran the streets of DC as a mob of suburbans and cops

We had so much fun the first time, that the owners had us back, dressed in white:

And now here we stand, feet off the ground, healthy and ready to take over the District. For those of you who have recently joined and think that people at NP DC have been friends forever, it’s false. We’ve known each other for a year. Project this out another year, and then one more, and maybe even one more. Who know’s what we look like, if we break 500, 700, 800 people. But what I do know, is people will still be getting fit, smiling, and dropping $0 to do that. Stick with us, we’re only a year old.

The title of the CBS video was, “November Project: More Than a Fitness Movement,” and we all know that to be true. What we are creating is different. The vibe unlike anything else. The friendships, relationships that materialize don’t happen ordinarily. Each one of you made this year special, now let’s fucking celebrate that with #NP1YR.

MONDAY: Compass Coffee, Shaw DC, is opening their doors for us after Meridian Hill workout for special on java. Go in at ANY POINT during the day and get that special.

FRIDAY: Will be announced after we announce our Friday location.

#TattooVerbal: If this much socializing outside of workouts doesn’t drive 500, we’re packing it in for the winter.