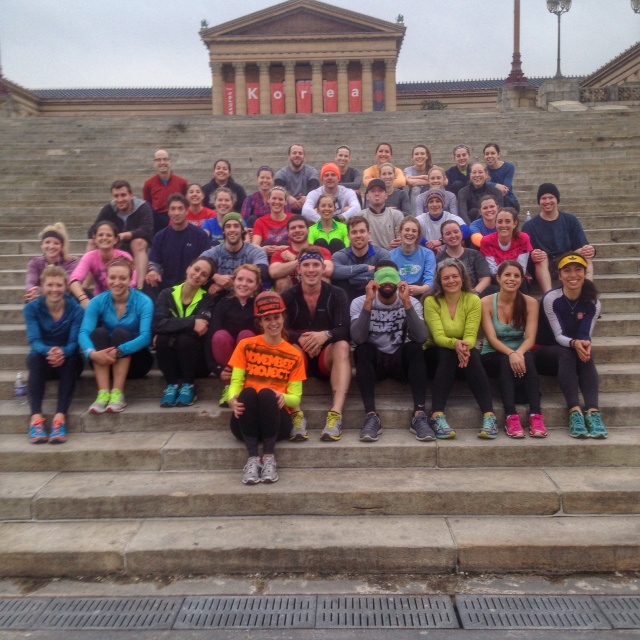 It was a lovely morning here in Philadelphia, and we could see in the eyes of our tribesfolk that there was a hunger for some fun. Since we have two social events coming up this week, leadership thought it would be a good idea to get the tribe running, talking and trying to learn some names.

Forty minutes were on the clock, and we began running The Stairs. Tennis balls with instructions were tossed about, and groups introduced themselves, hugged, and rocked some sit-ups, burpees, push-ups, paired-planks, crab walks to Rocky (which were cut short because a film crew was making some sort of Rocky documentary or something, and for some “reason” — us being awesome? — we were messing that up). In honor of National Walking Day (yeah, it’s a thing), some pairs even walked it out and let things get weird. The tribe did not disappoint, walking one round up-and-down the steps and sharing weird unknown facts about themselves with ladies and gents they may not have even hugged before! Good work, guys!

Following the workout, we gathered together for our group picture and a few words from last week’s Hard Hat Award recipient, John Farley, and guess what? … He gave The Hat to moi! So, while I could type all day about how amazing I am and why it’s so rad that I am the Hard Hat winner this week, I will defer to co-leader Dan, and let him shower me with praise:
“After John’s adventures across the Commonwealth, it was time for him to part with the coveted Hard Hat Award. John passed it along to NP_PHL leader, running guru, mother and all-around-bad-ass Suzanne. John mentioned how he first came to NP when he found (via Facebook) Suzanne was trying to get a pledge class rolling in Philly. Suzanne’s dedication to the movement is unmatched. She strives to make everyone’s experience at NP awesome, and she could probably kick your ass in a sprint. Congratulations, Suzanne! Tote The Hat with pride — you deserve it!” (Dan L.)

The best thing about this week is we don’t have to wait until next Wednesday to see everyone’s beautiful faces again. Make sure you grab your friends and meet us out for our first Run & Recruit Thursday night, April 3rd at 6:30PM. Also, come on down to the Spring on The Schuylkill event this Saturday morning, April 5th at 9:00AM. We love you and can’t wait to see y’all there! …