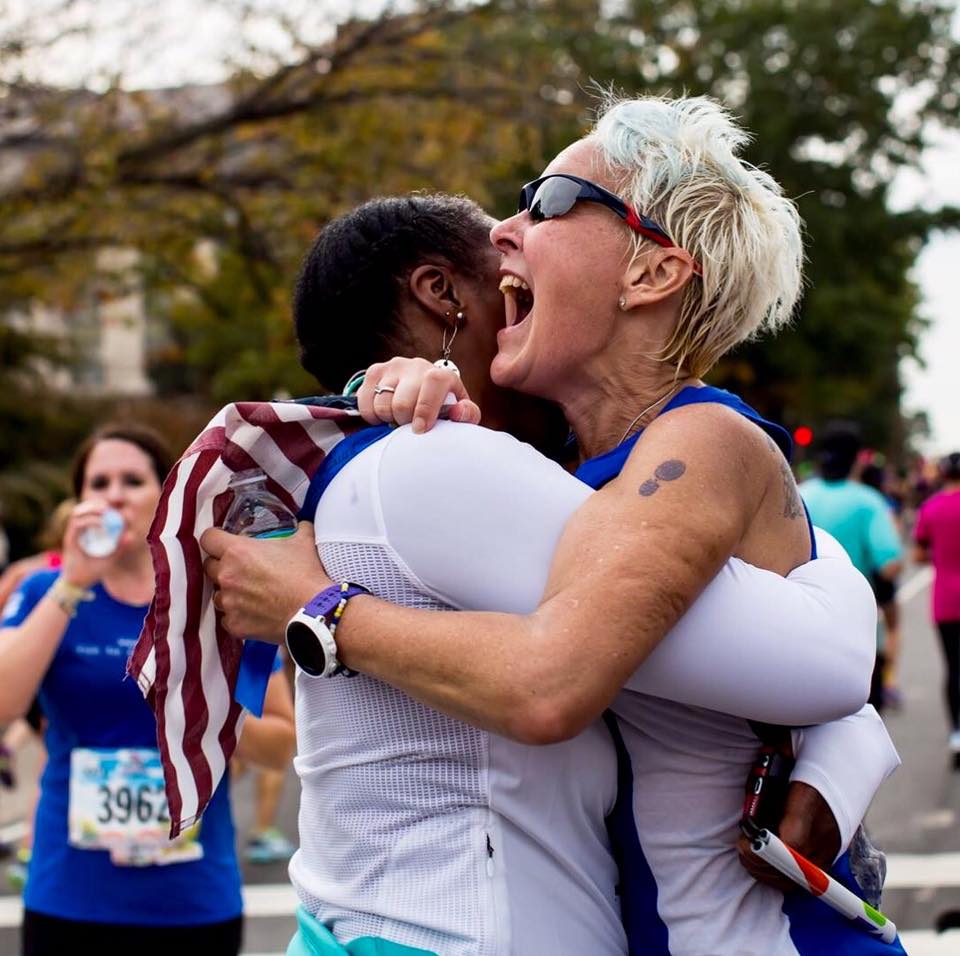 It would be impossible to measure the impact Kim Garrard Stemple has had on so many lives both within and outside of November Project.

Kim, or “The Queen of Grit and Grace,” or simply “Mom,” or [insert inspirational name for any group of humans she has inspired], would hate this blog. After all, we’re writing about her and not about others. Of the thousands of people within this incredible, goosebumps-inducing NP community, Kim is right up there at the top of a very long “selfless” list. She ran to inspire others. And she started her charity to lift people up when they needed it most. She smiled and loved so often, she touched all around her in the most beautiful way imaginable.

Kim died on Saturday night, but you can bet that her legacy will continue to shine as brightly as her personality.

For those who don’t know Kim’s story, read THIS.

The (somewhat) short version goes as follows: Kim, a New Orleans native, was already living a life of making a difference as a special education teacher and cross country coach — she was also, of course, an avid runner — in 2009 when she got sick. What was initially considered pneumonia turned out to be much worse — a rare mitochondrial disease that causes progressive mental and physical deterioration and has no cure. Her condition worsened after that: lupus, benign bone tumors, lymphoma, a painful nerve condition called sodium channelopathy.

So what did Kim do? For starters, she got a tattoo for each diagnosis. Secondly, in 2012, with a friend’s race medal hanging above her hospital bed, Kim started We Finish Together. The premise was simple yet powerful: people fall on hard times and need a pick me up; gather as many donated race medals as possible and add tags with personalized notes of encouragement to them (“You can do it!”; “You’re a STAR!”) to send to those in need. Quickly, hundreds, then thousands of medals were reaching people from all over. Kim galvanized friends and family — often from the hospital bed.

She also kept running. In 2014, she promised doctors Boston’s Jimmy Fund Walk would be her last marathon. Then in 2015, after moving to DC for treatment reasons (where we had the fortune to meet her and see her at many NPDC workouts), the Marine Corps Marathon beckoned. For Kim, the race held a special place in her heart — her husband Jim is a Marine. But Kim’s doctor told her she would die if she ran the marathon.

And then she lived, against all odds, another three and a half years, inspiring people all the way. Kim ran a 5k this New Year’s Day. She made a final appearance at the Lincoln Memorial for NP on May 29, her smile still warm and her hugs just as loving.

If you need an indication of how impactful Kim was, just ask anyone who ran a Lincoln log with her. Or exchanged a hug (or corny joke) with her. Or even just read about her, to be perfectly honest. Even from afar, her story is an ESPN 30 for 30 waiting to happen.

Of course, Kim would hate that. Because it’s not about her. She never wanted that. A couple months before Kim passed, we were at a We Finish Together medal tagging party and Kim was worried, but not about herself. She just wanted to make sure that we would be OK, that we would continue to see the light and spread love, that the NP community would stay as strong as ever. That said so much about Kim.

So, here’s what we’re doing Wednesday, a workout that Kim would be proud of:
1. #JustShowUp in your Mardi Gras attire. Or anything unicorn-related. Kim loved unicorns!

2. Tell your friends who might not see this to do the same.

4. Equally important, take a couple minutes today and write out a note of inspiration on a small piece of paper (preferably colored) that can be attached to a medal. We Finish Together is in need of these.

5. Prepare yourself for a damn good workout full of smiles and laughter. Kim wouldn’t have it any other way. 5:25 & 6:20, Lincoln Memorial.

ALL THE LOVE, DC. See you tomorrow!

One Reply to “Be the Spark: Kim Garrard Stemple’s legacy lives on”