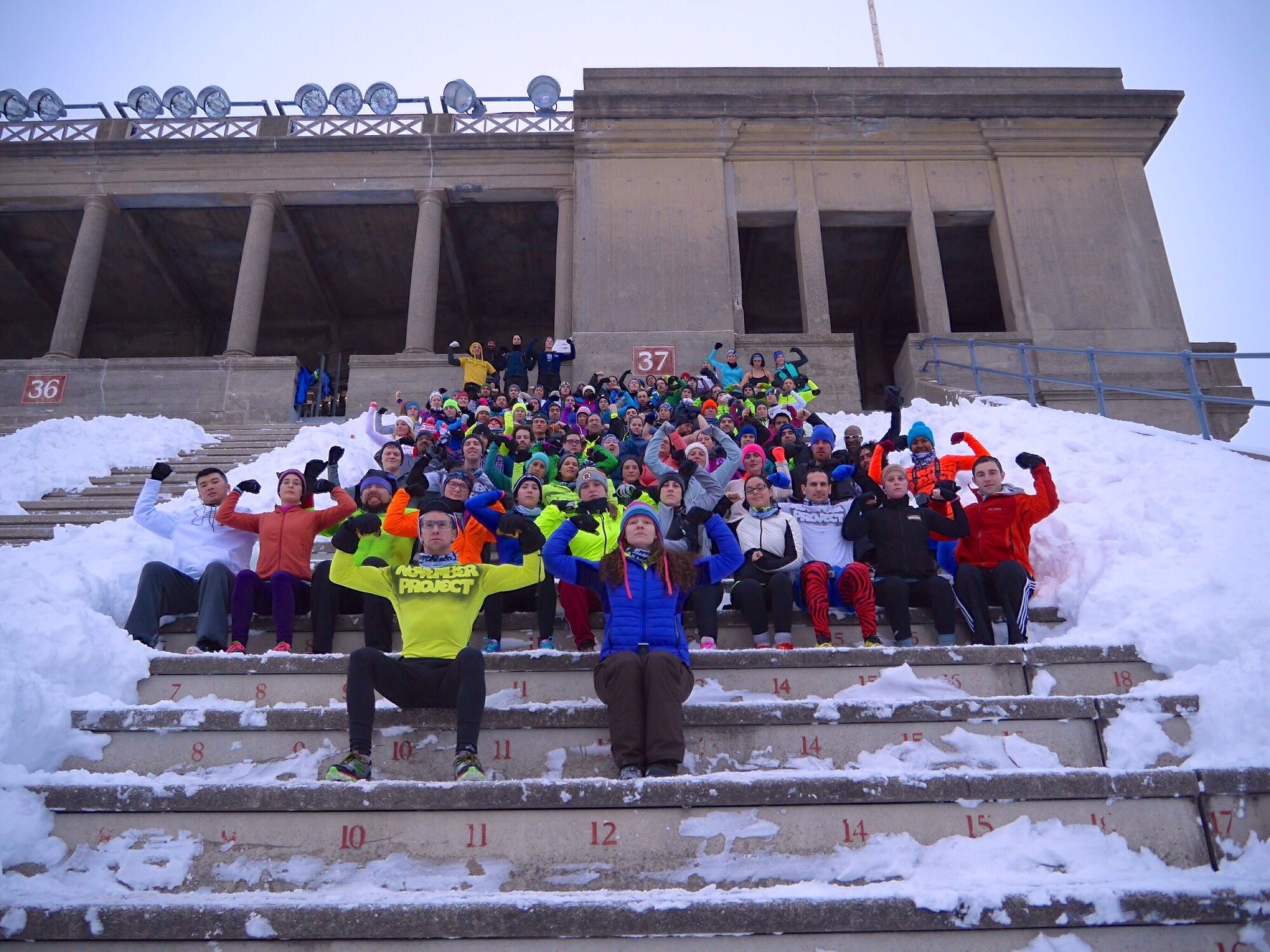 It’s hard to believe Boston has had as much snow as we’ve seen in the last fortnight.  It’s also hard to believe how impossible it feels to get around.  The T is slow, delayed, or just not running.  Entire lanes on roads are blocked with snowbanks making driving ridiculously slow and biking a sport of madness and futility.  Sidewalks?  It makes us feel powerless sometimes when we’re at the mercy of a public transit system oppressed by the snow.  At the mercy of roadways narrowed and restricted by the snow.  And at the mercy of the weather that forces us to have layers of gear to try to stay warm, dry, and protected from the wind.  And don’t even mention all those long training runs that were planned but now seem like impossibilities because there’s no fucking where to run besides on a treadmill.  It’s hard to feel powerful in the midst of shit going on like that.

I’m going to be really honest.  When I stood alone at the bottom of section 37 at 5:45pm last night and saw a vast expanse of snow where there were supposed to be stairs, I didn’t think we’d be running stairs until May.

Don’t get me wrong, I totally believe in the power of putting your mind to something and working together to make even enormous challenges feel manageable.  But like many other things that felt impossible this week, I focused on the good–seeing what we could do, rather than dwelling on what we couldn’t do.  I made my peace with getting a sweat by shoveling for a couple hours, seeing some beautiful NP faces, getting some hugs, and heading home to plan for the Wednesday workout at Harvard Track, not Harvard Stadium.

Little did I know then, that for breakfast this morning we would have 2 sections, the back staircase, and the “I-never-knew-it-was-there” middle level of the stadium I shall call the “track of glory” for 35 minutes in a circuit that will now be forever known as “Wonderland.”  You should also track how many laps you completed on the circuit.

What happened last night lit a new fire in me.  Two sections may not seem like a lot when we work our asses off to get 19, 37, 40, 50 or more sections in a single workout.  But shoveling two sections is another game.  However in exactly 90minutes, a team that started with two adults and two kids, grew to almost 20 people, who made fierce and joyful work of clearing two sections so we were able to run up and down them this morning.  At one point, I exclaimed something cheesy about loving this tribe and being so grateful for what we were able to do…and Bojan quoted KG (that’s Kevin Garnett, not to be confused with a guy named BG who used to work out with us and even shoveled out the stadium once) after KG and the Celtics won the NBA championship in 2008.  “ANYTHING IS POSSIBLE!”

I watched the YouTube clip of KG’s interview after the game when he said “Anything is possible.”  What’s moving about it is not just the words he says, it’s the way he throws his head back and yells those words with unfiltered, passionate celebration.  He believes what he’s saying.  It’s not just a motivational quote he’s spouting–he’s speaking from his heart. I’m sure he wanted to believe his team could win before they actually did, but there was something that had to feel out of reach or impossible about it. But to have a dream become a reality like that, it changes us.

Now, shoveling out 2 sections of Harvard Stadium is hardly an NBA Championship.  But that fire in me that got stoked last night was about not only knowing, but really feeling and believing that anything IS possible with this tribe.  It’s shoveling stadium stairs one at at time until we have two sections to run on.  It’s all of your individual efforts and races and badassery that show me each and every day that obstacles get overcome.  We get stronger, faster, better because we put the work in and we dare to believe that it’s possible.

After all the impossibility this week, I feel totally empowered.

It was empowering to move the snow out of the way last night, to make space for us to move.

It is empowering to tackle the stairs every chance we get.

It is empowering to keep moving in spite of the weather and snowy obstacles.

It is empowering to have a community–a family–like this Tribe.

We are powerful human beings. Remember that in the midst of the shitty stuff. #TheTribeIsStrong. And to quote another dude we call DG (not KG or BG), “This. Shit. Is. Good.”

I believe it keeps getting good-er all the time.