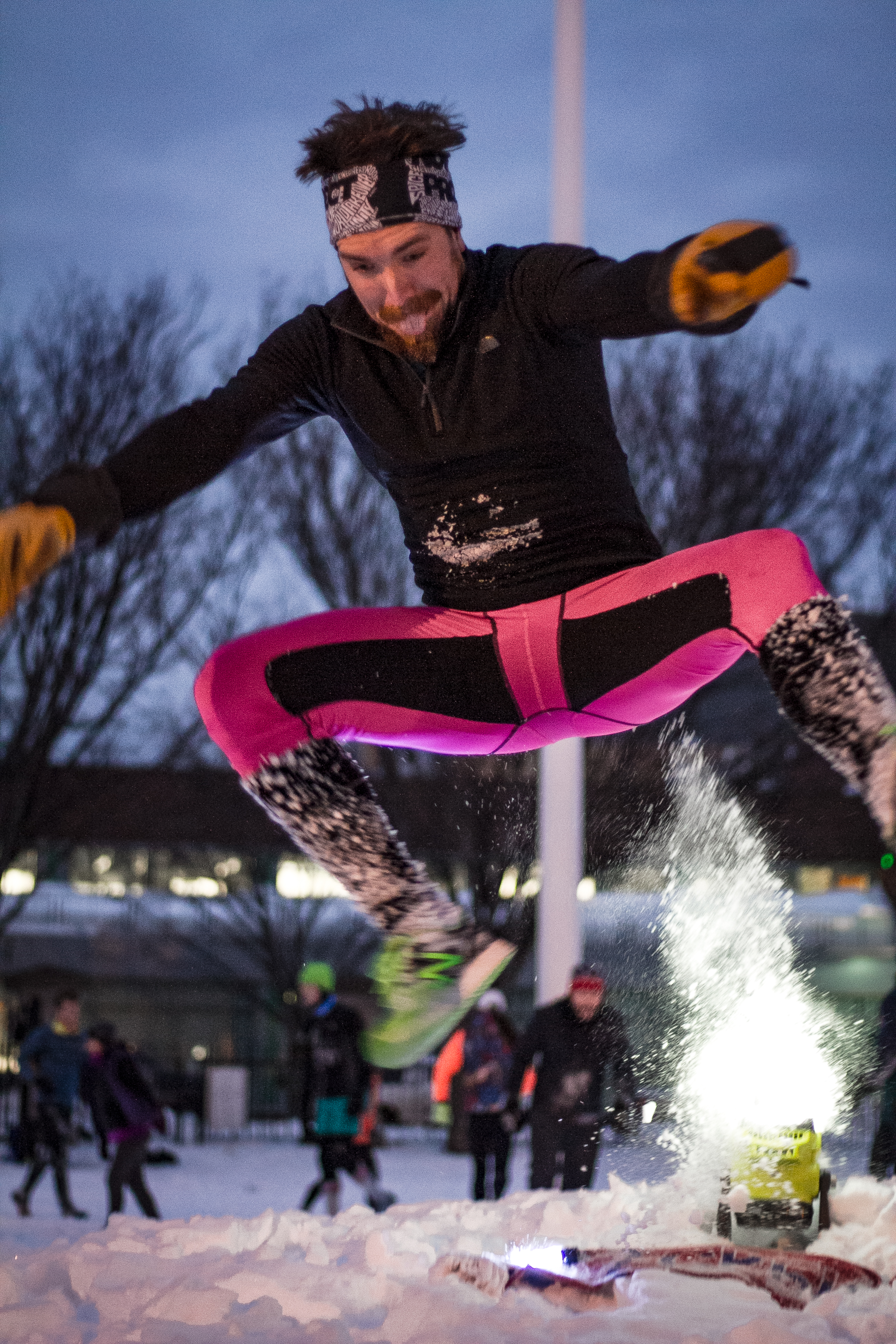 Head to the bathroom to try to wake up.

It’s cold, but not TOO cold. I begin running on my street. Hit Comm Ave and look to my left. The B line train dings its bell for literally no one as it stops at Chestnut Hill Ave.

I hook to my right to hoof it up Comm Ave. For the first 10-15 minutes of my run I’m completely alone. Sure there’s a few cars driving up and down Comm, but the city is quiet–still asleep. No one is outside. No one is out running. Until I reach Harvard Ave.

At the intersection of Harvard and Commonwealth I have to stop and wait for a Boston Globe truck as it slowly navigates the slushy streets. I see a fellow compatriot–another human has decided to brave the cold and ice to get out and enjoy their silent morning. I extend my hand, as I do for every human I see out on the streets running, she looks at me like she wasn’t exactly sure what I was offering. Right as I pass she throws her hand out as well. Two people in the dark morning, recognizing the other’s commitment to getting up and getting out. Kudos to you, random stranger, you’ve got a head start on everyone else in this city. Shortly after the high five that almost wasn’t, I then look to my left to see an old friend, the B line coming up beside me.

That damn trolley that I left at Chestnut Hill Ave has caught back up to me. Now, I never thought I could beat the T from BC to Kenmore. I never even thought about trying. But this morning just happened to work out in such a way that destiny had other plans. My pace quickened.

I move onto the street for better traction, and to get as close to the T as I can without getting squashed by a car.

I kick it up a notch. I point to the T driver, to get their attention. People on the T just think I’m an idiot wearing pink pants**. At the next stop (outside the Dunkin Donuts–The old Sweat and Soul Yoga is probably a better landmark…), to doors open as I scream past.

“It’s on! You, me. First to the BU Bridge,” I yell to the T driver trying to make it interesting. I don’t hear them say anything back.***

For the next 5-6 stops we’re neck and neck. I pass the T, the T passes me, the T stops, repeat. We get to the last stop before the BU bridge. It’s now or never.

I crank it up to 11, but it turns out the T has this, like, engine inside it? that makes it go faster than I can run. I lose to the T by 12 seconds. It rolls through the BU bridge intersection and off into the morning.

I cross the BU bridge.

At the intersection across the Charles, I see a girl out for a run, and ask “Are you going to November Project?”

“What’s that?” she replies.

“How long did you plan your workout to be?” I ask.

“I need to be home by 7,” she buffers, assuming that whatever I was about to say is going be completely asinine.

“Perfect. You wanna come to a workout around the corner?” I ask, knowing full well how insane this is probably sounding.

“Outside?! How many people are going to be there?” she tries to figure out if I’ve completely lost my mind, or just a little bit.

There are all different types of ways people get to their first November Project workout. They hear about it on the news, they see it on Facebook, their friend, family member, or coworker brings them. Heck, even the “Why does it say November Project on your shirt?” recruiting works. But my all time favorite recruits are the ones that sign up the morning of. The ones who throw caution to the wind because they were running by a Monday, or saw a group of us running in the street. To all of you who came to your first November Project workout this way, I tip my hat to you****. You are the epitome of seize the moment. You are exactly what this movement was founded on, needs more of, and will always welcome. Spontaneous temporary insanity with the hope that the experience is worth the risk.

“Alright,” she says for some reason. 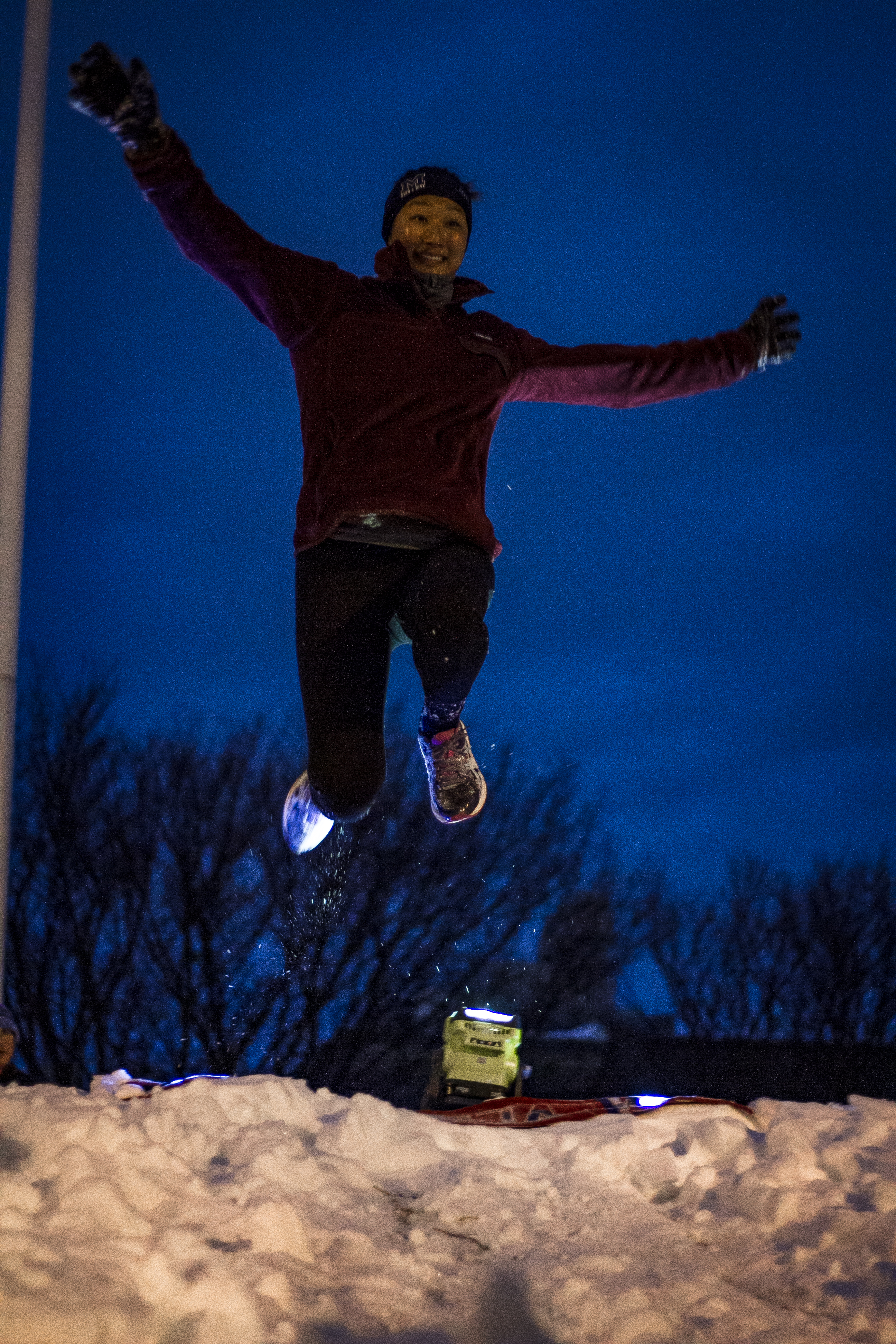 This is Jenn. Leaping over the light into a snow bank at her first NP workout ever.

So to all of you out there, that want to make the most of this life, bounce out of the norm. Learn from #NewbieJenn this morning. Try something new today, or this week, or this month. Life begins at the edge of your comfort zone.

P.S. This has been two meaningful blogs in as many weeks, so be prepared for my next one to be full of stupid gifs, youtube videos of who knows what, and elementary school jokes coming up next…

*don’t hit snooze. It’s a waste of time.
**I was.
***To be honest, the T driver probably didn’t give two shits about what I was doing. But in my head, this was an all out race. I will say though that this particular T seemed to open and close its doors and start moving faster than any train I’ve ever been on during rush hour. So the jury is out…
****Especially if you did your first workout in jeans, or a dress, or other normal people clothes.