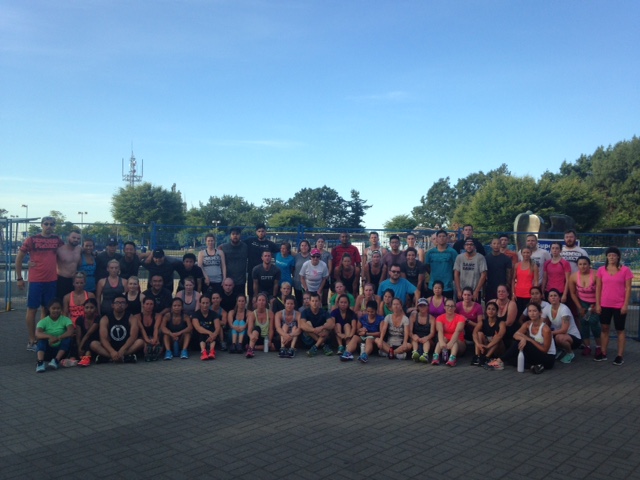 Richard Hortness here (AKA Mr. November) as I was introduced by the mothership your casual 2xOlympian and sprint specialist. So pumped to get our first blog out after such an amazing workout today. We leaked the map below last night to get people pumped and had people show up bright and early to get the inside schoop on what we were about to throw down.

Our fledgeling tribe continues to grow and continues to change lives the only way that this little thing called the November Project can. We sang happy burzday to someone the way that we do, by putting her in the middle of the group and telling, no, showing her that she is L.O.V.Ed .

What we threw down was our first PR day here in Beautiful British Columbia  “THE BEST PLACE ON EARTH” (yeah it says that on our license plates).  I love racing. I went from the pool to race cars then to NP where we #raceeverything.

PR day is so exciting for me. As a sprint freestyler I spent years and years and years training to go from one end of the pool to the other faster than I did it the last time. More than that I would compare year to year and the time of year to see if I was ahead of the curve from the previous year or not. I would not always go faster but I knew that there was one thing that I could do better. One thing that I could do faster. More training that I could do in between races or over the course of a year to make myself go faster. To put it into perspective I would train for 12 months in between major competitions to try to go between one one hundredth of a second faster to a tenth, and i would be FUCKING PUMPED if I did it. all over 0.01sec. Why because it means that I GOT BETTER!  So now after our 9 week pledge and a few more weeks of getting these people used to how bat shit crazy Graham and I are and how we rock out workouts we get to give people a chance not only to #raceeverything but to set that first benchmark that is their PR. And the best part about today was I got to see the fire come out of every person that #justshowedup, and you know what massive #payday because they did what they do every week which is INSPIRE ME to work harder, be crazier, and smile more.

After all that we handed out awards—>  beers, magazines and hugs and of course the Positivity award and the Mountain Sexual award. NO not the lumber sexual award that is different and we don’t have one of those. And everyone that was there got a PR so BOOM 100%best times! #micdrop

But most importantly today we flew our tribe through the 7 nation army circuit flying the only flag that we could fly under, #21humpbeat.

Things heard at this weeks NP workout:
We’re stretching our huggin’ muscles
“We have to run around that whole thing? Yah!”
“i feel GREAT! Don’t your feel great?!?!?”
“Pants were a bad choice”
“TEAM BREAKDANCE BRING IT!”
I’m so slimy
“just keep hitting yourself”
“We Servvvv—- I mean  HOISTY!”