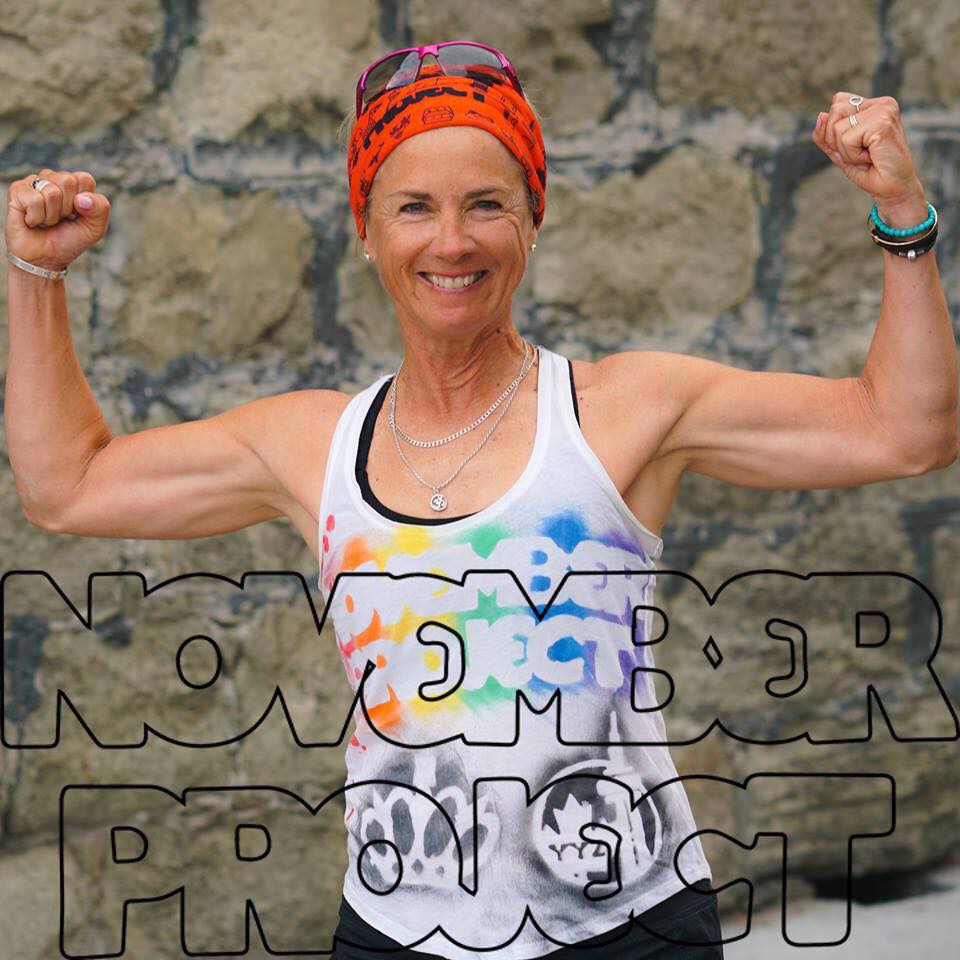 Doctors, lawyers, pilots, teachers, students, brothers, sisters, mothers, fathers, sons, daughters, doesn’t matter who you are, what you believe in, what your ‘status’ is, you are or can be a part of the Kelowna November Project Tribe…and what a tribe it is…such a community based “person loving” group that our mayor declared a special day, November Project Community Day, on November 28, 2018…how far we have come!!!

Wow, when Roz introduced me as the NP, OG, I thought to myself, shit I am an OLD GIRL (I said it before you did Patsy!), and yes I am NP Kelowna Tribe member…little did I know that as an “original gangsta” of the NP Kelowna Tribe, I had to search way back in my memory to remember how I got involved in this crazy Wednesday 6:29 ritual…  Yes I am a morning person (although in the dark cold winter mornings I am tempted to turn over and go back to sleep when my alarm goes off), I am older than a lot of the tribe but that is why I love it so much because it doesn’t matter who you are, if you love movement, or not, if you show up you will be guaranteed in the hour you are there you will bounce, you will hug, you will high five, you will laugh your ass off, you will burpee, you will hoisty, and I bet you will be introduced to muscles you forgot you had…

I think I made it out to the second workout at Knox Mountain near the end of August 2015, when Roz and Keith were trying to pledge to become an NP tribe.  I had met Roz through Lululemon and my son’s friendship with her. Roz was the daughter I never had, she was a shining star in the community, she had it all going on, and was a blast to spend time with, so if she was going to do a free boot camp I was going.  Our relationship deepened in that first year of NP when I coached her for her first Half Ironman in Oliver, this gal is a beast of a tribe leader, she is a helluva friend but also as a very talented athlete, she does anything asked of her, always with the biggest smile on her face and a ‘hell/fuck yeah’!

We joke about running from the law in the ‘olden days’ but it was true, the bylaw officers made a regular appearance at our early workouts due to a noise complaint from a lady in the hood.  Roz would say when the bylaw officers were spotted approaching, ‘just pretend we are out for a run’, and we would all scatter and run, usually it meant running up Knox Mountain and trying to blend in with the shrubs…we had to keep moving! It became a thing, running from the law…it almost got to the point that there was a post on Tues nights to tell you where the group would meet the next morning, I expected a secret hand shake soon and a password!!!!  We moved to City Park, and continued to move within the park, the infield of the old track, the bleachers, then I think Roz used her connections with a certain person in City Hall to call the dogs off us, and we eventually settled at the Sails after some harrowing encounters with the law!!! (Note: that certain person from City Hall eventually joined our tribe in our early morning workouts)

As a triathlete I was looking for a workout that was fun, without structure and full of surprises,  I hit the jackpot with this group.  The first year saw some wide fluctuations in attendance, once the cold, dark mornings of the winter of 2016 hit we were lucky to get 5-10 people out, I saw a memory on FB a few days ago that was from Dec 15, 2016 the temp was -15c and we had a big group that day of 16 people and at that time Roz was the solo tribe leader!!!! At some point that winter there was a week that Roz was travelling and she had a surprise ‘leader’ arrive…drumroll…enter a tall dude with a fluorescent yellow sweat shirt, a ball cap on backwards and black boxers with red hearts on them over a pair of sweats and he introduced himself as Roz’s basketball friend, little did we know that this was the beginning of Steve’s affiliation with the tribe, and we were blessed with his entrance…

I retired in August 2017 and my husband and I travelled to Europe for 6 months and this is when I realized I was part of a phenomena that was truly world wide. I had the opportunity to transverbal with the London UK tribe and I was proud to shout out I was Kim from the Kelowna BC tribe (now mind you the Brits had no idea where the hell Kelowna was but when I mentioned we lived by a lake and we made wine and I was a member of a bad ass tribe that they should come and visit I was welcomed).

I watched the shenanigans you folks got involved in while I was gone and I was so proud of the events and causes that you supported.  Shoe drives, blood drives, Swinging with the Stars, beer making, rock climbing, hockey games, fund raising, it was amazing how a group of like minded people stuck together and did our community proud.  Spevy kept me up to date on the fun you were having, and the attendance challenge The North Face had, I was amazed compared to the attendance in the winter of 2016 how great the numbers were in 2017, through a very nasty winter too! I ended my 6 month trip with one more visit to NP London and was itching to get back to my tribe, even though the NP London group was welcoming I wanted to get back to my peeps, and meet this loud woman named Michelle who had become a member of the tribe while I was gone.  I missed Spevy, Helen, Patsy, Cory, Gaylor, Max, Eric, Guilliame, Kwame, Andrea, Adi, Olivia to name a few, but I missed Steve and Roz and their unrelenting excitement and humour the most!

I missed one week and got to transverbal with the NP Toronto tribe in June and once again I was amazed how welcoming a group of strangers can be and how like minded we all were, and I know in talking with other people who have visited other tribes this NP movement is quite amazing, and is in almost 50 cities around the world.

So if you have never been to NP, or if you have been absent for a little while (we have missed you and have noticed your absence, so get your ass out of bed) come join us.  I try and make it out every week because I am afraid I am going to miss out on the MOST fun EVER!!! You do NOT have to be athletic, you have to have a heart and a set of lungs!  Your heart has to beat and much like the Grinch your heart will grow and grow and grow until it busts out of your chest and you find yourself with a silly ass grin, laughing out loud, bouncing around the Sails at 6:29 every Wednesday and when you are asked if you are good you will know to respond FUCK YEAH!!!

Happy holidays to the most amazing people I have had the pleasure of meeting, see you at the Sails 6:29 every damn Wednesday morning!  #justshowup