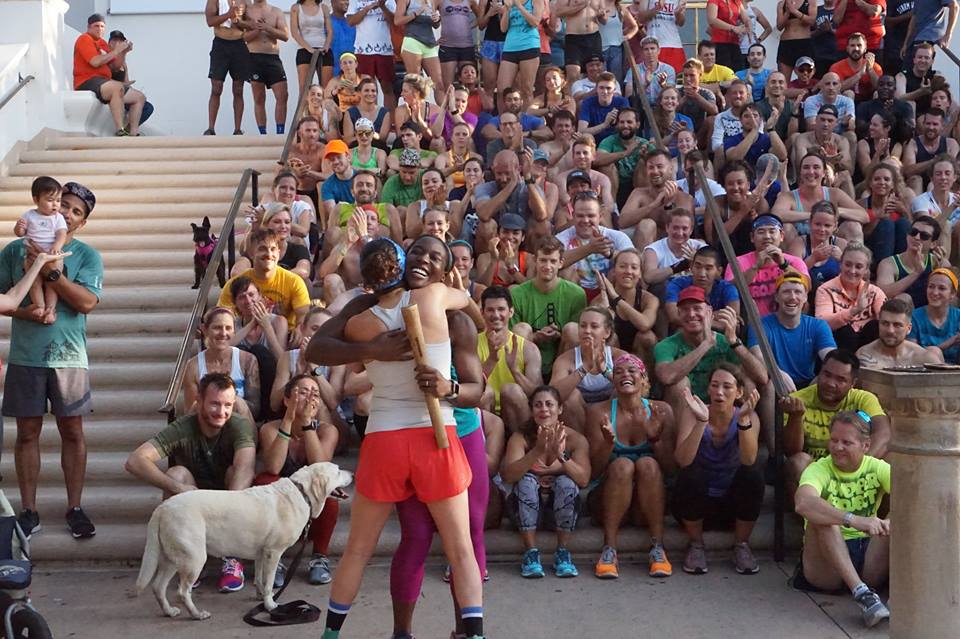 Today’s guest post is from someone who doesn’t cardio. But after months of just showing up, I think it’s safe to say that we might be breaking her into a runner. Without further ado – Deveney!

Receiving the Positivity Award was very much needed as I was heading to South Lake Tahoe for my fitness competition. I have never tried my hand at body building until now and I was experiencing a lot of stress, doubt, and anxiety leading up to the competition. But, despite all of that, the members of November Project encouraged, supported, and motivated me through it. Like I said, receiving the positivity award came at the right time, because it was what I needed to push through the last few days until my competition.

After receiving the award, I just so happened to watch on YouTube what the positivity award really means. The Positivity Award is an oar – a paddle used to row. When rowing, it takes the entire team. One person missing, who failed to “just show up” throws the entire team off. That missing person, that missing oar, is so pertinent to the success of the team. So to me, receiving that oar – that positivity award – makes me feel like an important part of the November Project team. Don’t get me wrong though, November Project is already all-inclusive. We’re all a team! Most importantly, this team takes or everyone and anyone who is willing to just show up and do their absolute best. It’s a judgment free zone, you can modify the workout to your level, you can take as many breaks as necessary, etc. You’re a part of the team the minute you step foot out of your car and join us for the workout. BUT this award just made me feel like I was home and with family.

Once word spread that I was competing in a body building competition, the amount of support I was given was paramount! At the workouts, at coffee, Facebook/Instagram messages, text messages, etc. The closer my competition got, the more the members of November Project supported. They actively involved themselves in my journey to help push me through. I personally was not used to one, let alone a handful of people, so engaged in my success. THAT is why I feel like I’m home. THAT is why I feel like I’m with family. These people took the time and energy to see me through. Me, someone who has only been at November Project for five months, had a tribe, the team, behind her who was there every step of the way.

Like I said above, November Project is for anyone who is willing to come and do the workout. Shoot, you can just come, watch, scope it out, and you’ll still feel like part of the team. I’m not sure how they do it, but you’ll feel welcomed the minute you hug the first person. If you’re not a hugger, five bucks you’ll become one when you continue to Just Show Up – I’m proof of that! JUST SHOW UP! JUST SHOW UP! JUST SHOW UP! I promise there will be no regrets!

To November Project and the members: I am so grateful to have been awarded the Positivity Award! I owe so much to y’all for making it so great! Thank y’all so much for your love and support!

One Reply to “November Project – The Positivity Award”