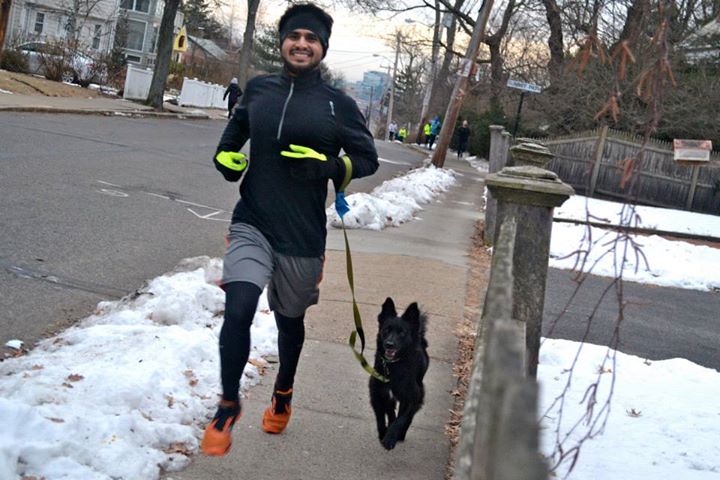 We don’t know much about our friend Rohit, aside from the fact that during his first workout with November Project Boston, we took an epic photo of him matching strides with his amazing dog while grinning from ear to ear. We also know that from that point on, any time he showed up to the workout, he brought back that smile. Recently he sent us a note that we decide to share with rest of the tribe. Sit back and enjoy…

I always enjoyed playing sport, but I was never a runner. As a matter of fact, I was fairly chubby as a kid, exacerbated by a tendency to overindulge on home-cooking whenever I was back home from school. To be sure, I loved playing tennis, cricket, and soccer, and was semi-competent at all three. Still, I was never a runner.

Then I adopted a dog, a Border Collie mix wired like the Energizer bunny. Finding it impossible to tire her out, particularly in the winters, I started taking her on short runs. Short runs slowly extended into slightly longer ones and at some point in the winter of 2013, I figured that running a half marathon may not be a bad idea. Like so many other people, I followed the events of April 14, 2013, with horror, anxiously waiting for word from friends and family in Boston. That was also the first time I thought, “Hey, maybe I should do a marathon some day.” Two weeks later – and a year ago to the day – I ran my first half marathon. I still didn’t feel like a runner.

Flash forward nearly a year, to this past Saturday, and I had run two marathons, the first a spur-of-the-moment decision when I had signed up for a half marathon, and the second a more planned affair. For someone who barely ran more than 5K a year ago, it has been a paradigm shift.

There’s a great quote in Oscar Wilde’s Model Millionaire, where he says of someone, “[He] was an artist. Indeed, few people escape that nowadays. But he was also an artist, and artists are rather rare.” I run, but don’t we all? Runners however, are rather rare.

Brief interlude: I moved to Boston in December. The move has been a good one for a number of reasons, with one of the biggest ones being the November Project. To put it simply, this group is stupid amounts of fun. I don’t know who anticipated the Summit Avenue workouts more this past winter, my dog or I. Harvard Stadium swiftly disabused me of any ideas I had about being in shape, but that realization could not have been more fun. Sure, the workouts have increased my endurance, pushed me further, and kicked my arse on a fairly consistent basis. But above all, it has been fun. Running a road race up in New Hampshire last month, it was gratifying to see folks wearing #grassrootsgear on the course, with BG cheering us on from start to finish. I can thank a full tour of the stadium for helping me push the pace in the race, but I couldn’t have done it without the peanut M&Ms that BG handed out at Mile 15. Did he know me? Almost certainly not. But that’s what this crew is about; a community of support. And fun.

So this past Saturday, I wore my own grassroots gear to the Illinois Marathon, hoping to assist in whatever way possible with the world takeover. It was a warm day, but halfway through the race I was cruising, talking to one runner about the Wednesday workouts, talking to another about a possible BQ. At Mile 14 the cramps set in. At Mile 18, my calf started twitching all over. At Mile 20, my leg seized up completely and I toppled over. Lying there in the grass, I saw a steady stream of goals pass by: a BQ, a PR, and increasingly likely, even the possibility of finishing. One of the race volunteers was getting ready to call for a medic. And then a passing runner paused and asked, “You good?”

Those five minutes lying by the side of the course stretched on for an eternity. Picking myself up was hard enough; covering those last 6 miles was harder still. Each time I tried to set off on a job, my calf seized up in knots. Over and over again. It’s a disconcerting thing when your mind and your body are so entirely at odds. I hobbled another 4 miles and then limped the last 2 miles to the finish; those 2 miles took me over half an hour. I will never forget those 2 miles. Forget running, walking would be a charitable description for what I was doing. But it was in those two miles that I may have finally become a runner. It was beautiful. At the Boston Marathon Expo, we were told that the November Project is not a running club. And I was not running.

But sometimes, being a runner isn’t about the running.