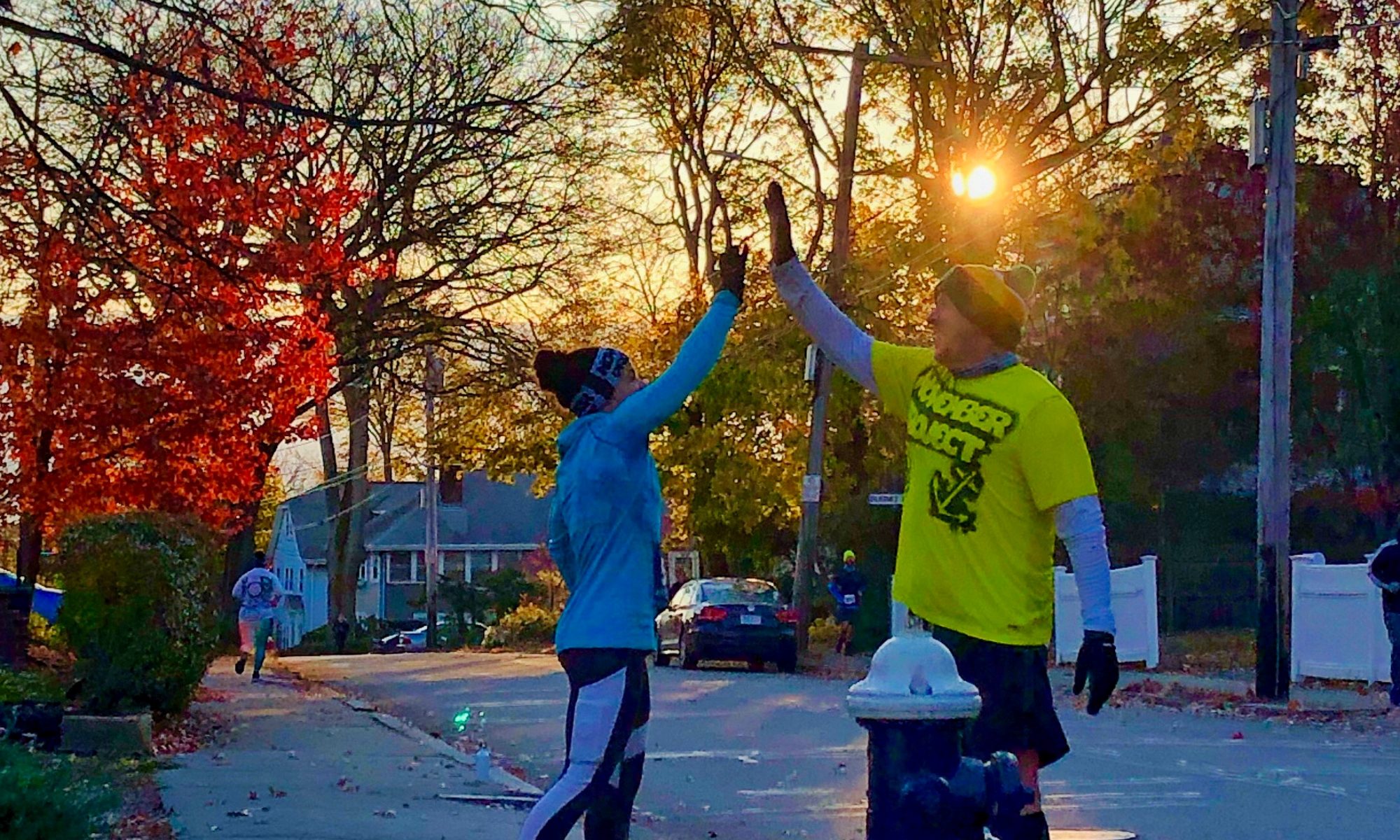 There are many, many things I’ve done with November Project that are weird, a little crazy, and unexpected. The WOahMAN NP triathlon is absolutely all of those things. There’s nothing like getting up reallllly early in the morning to go do some fitness thing in the dark, cold morning that makes people think you’re cray cray. And it’s definitely ridiculous to take all 3 of the NP days of the week and smash them together into one single event that you do all at once. Who would ever think to do that?

But I’ll share with you just a moment of my morning, which happened between 4:55am and 5:07am. I had arrived to the top of Summit Ave. and gotten out of my car–layered in 3 tops, long pants, and gloves–hoping that the almost 20mph wind wouldn’t thwart all my intentions to stay warm enough for this journey around the city, the stadium, and the hills. I believed people were showing up for the #WOahMAN. I was certain there would be at least a small crowd of folks choosing to step up to the crazy and see what they could do.

And no one was there.

Not a single anyone.

Not even Jared Cain.

And I wondered for a minute. I wondered a million things in the smallest fraction of time–questioning a lot of things, trying to reassure myself of things I absolutely believed to be true, and quickly landing on a peacefulness that no matter what happened in the next 5 minutes and the following two and a half hours, it would be great.

But the questions of were people coming, would they love this ridiculous challenge to do a Winter WOahMAN, or would they just stay in their cozy beds where the wind chill is nothing but a distant idea?!? Well, those questions hung out for just long enough until Keely Boyer walked up the street. He was the first one to show up get out of his car and join me–but then over the course of a couple of brief, windy minutes, more and more…and more and more people arrived. Bundled, lit up, bravely bare-legged, eager, scared, return WOahMAN-ers, and first-timers alike. Everyone arrived and bounced and hugged and started.

And it was in those 12 minutes from no one at all to “GO” that I experienced what I believe is the full spectrum of emotions at NP. I was cold, alone, a little nervous myself about taking on the physical feat of the event. I wondered. I worried a little bit. I eagerly hoped I wouldn’t be alone–and then as soon as there was one person, just one other “I’m here, let’s do this” companion, everything felt a little easier, a little more exciting/less scary. And that’s really what NP was on the first day of it–a moment of not doing it alone, of not braving the cold or the dark or the challenge on your own–that made it less scary/bad/overwhelming, and a little more exciting and fun. What might seem crazy, now seems like adventure and living with a spark. What might seem weird, now seems totally awesome because everyone around me is doing it too. And what might seem unexpected, now becomes “something that I do” because look at us, we’re doing this. We’re running in this mob/pack down the middle of the streets through Brookline and Allston, we’re trying to remember the course so we can hopefully find our way back to the hills, we’re shouting out names in the stadium because we care who’s there and that everyone gets through it. We’re joining each other for extra burpees, challenging ourselves to do them all, even though no one is counting them for us, and we’re digging really, really deep to finish as strong as we can, no matter what that looks like.

And above it all, beyond the ridiculously amazing feat that the WOahMAN truly is, there is so much gratitude for the community who shows up for each other on days like today, and every other day. Not one of us started or finished that thing this morning alone–not one of us got through those sections in the stadium or up one of those hills, or through those burpees–without being impacted by someone else. We don’t do this alone, and we never need to because together is part of the magic. Being #weatherproof might seem crazy, but it also makes it that much more fun.

WOahMAN is just one of the many, many examples of how NP surprises us, challenges us to be better, fitter, faster, happier human beings. It sure is weird and a little crazy too, but the unexpected rewards from taking part in something like folks did this morning, is well worth the effort to #justshowup.

I really hope that as the winter continues, WOahMAN participants return for more of the series. I hope that more of you give it a shot, despite the cold and dark–it’s part of the fun. I hope that those of you who wonder or worry yourself, about being able to finish or how long it’ll take–that you also remember the things we do at every other workout–if you need to scale the distance to make it a WEEman* that you feel excited about, rather than scared, then do that! At breakfast after the workout this morning, the WOOHOOman** was invented, which can also be your option. NP isn’t about creating things that only some people can do, it’s about inspiring all of us to do the stuff we just wouldn’t do on our own, and then stepping into the challenge to see what we can accomplish. Everyone should always step far enough into the challenge to get what you need, not to feel scared and overwhelmed.

Let’s all keep moving through the winter–and if knowing that WOah/WEE/WOOHOO fun is coming, we’ll be more motivated to show up for ourselves and for each other, then they’ve served their purpose.

Keep showing up and keep changing the world. Thanks for being so good, NP_BOS.

*WEEman: a scaled version of WOahMAN that includes the run to/from the stadium, a 1/2 tour of stairs, 25 burpees, and two full hills.

**WOOHOOman: another scaled version of WOahMAN that includes the run to/from the stadium, 11 sections, 25 burpees, and one full hill.