This guest blogger is hella rad, has a great sense of humour, does amazing work with kids and has hair like My Little Pony and I just want to braid it… and I’ve told her that.

This is Kat D… 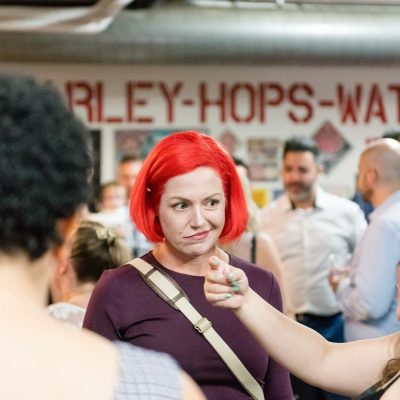 “For frame of reference this post was inspired by NP Seattle’s (un)diclosed experience, but really it began last May as these thoughts have been percolating (like the finest cup of coffee) in my head since the first day I came to NP YVR last year.

The theme for last Friday night was, “Taking Chances,” as I often do when I am at talks or presentations I began to muse what I would say if I was speaking. Or perhaps more accurately I question if I would have anything to say. Before I had a chance to become attached to that thought Casey began to speak. When he was speaking I was captivated by his story. It was raw, and honest and I was more than a little in awe that he was willing to share something so intimate about himself, sometimes I can’t even tell people I want to be their friend (more on that in a bit) and here he was letting us see how vulnerable he was. Then we ran, and another story was shared, and then we ran again and another story was shared. Needless to say we repeated this a few times. Each time we left my thoughts trailed back to the words that I heard repeated, “I thought of myself as risk averse,” and I wondered, if in my story of taking chances would I ever describe myself in that manner?

I know from conversations with people that my life can seem as though I throw caution to the wind and jump. And maybe I do just that;  I moved from Vancouver to Edmonton by myself at 16, moved myself back at 18, got pregnant at 19, married at 20, separated from my abusive partner at 22, started my MA at 29, have been in a long distance, cross border relationship for 5 years. My life is risky to some, but simply my life to me. All of the choices I have made seem like the natural conclusion of the spaces that I have been in at the time. The steps that I have followed seemed at the times predetermined and so I have frequently viewed these aspects, that others seem to think of as brave, as the natural next step in my story. I see myself as someone who does what they need to do to survive, all the while feeling as though I am wildly, chaotically flailing my way through life (think Bart and Lisa Simpson in this clip https://www.youtube.com/watch?v=9ZSoJDUD_bU). In this regard I do not think that I am any different than anyone else, we all take what we are given and figure out how to put it together until it resembles something we can live with. Sometimes that amalgamous thing is incredible and sometimes, well sometimes it is shit.

Overall, I am content, more than content with what I have accumulated and achieved in life at this point. Those ‘risks’ have brought weird lessons and tremendous joy. My life is however constantly fueled by the spectre of a profound anxiety that I have had since I was a child. This anxiety tells me some pretty horrible things, most of these things don’t need to be said and I know that others have similar voices that say just as many jerkface lies as mine do. But throughout my life I have caved to those voices more than I care to admit, especially when they tell me that other people do not, will not, cannot like me or when they tell me that I will not fit in, that I am not capable of joining in, or when they tell me that I am boring and uninteresting. They often tell me to be quieter in public, to not speak to people unless they speak to me. Historically I have listened to those voices and then found excuses not to go places. I have cancelled trail runs with friends because I was certain that I didn’t actually belong there, I wouldn’t be able to keep up, people would be frustrated with me. I used those same types of excuses to put off coming to NP for a long time. Did it look fun? Did I think that I could benefit from it? YES! Could I go? no. I had every excuse in the book, it is too far, too early, I can’t go alone, only weirdos go alone (Andre I heard you so hard when you spoke to this last week) but the reason at the heart of why I wouldn’t let myself go was because I was afraid to be there taking up space, I was too afraid to be me interacting with other people. Afraid that what my anxiety was saying would be confirmed, that I didn’t belong there, that I would be the slowest (who cares) the most uncoordinated (probably actually true, seriously there are things even after watching you all kill it  still make no sense in my body or brain) that I would be awkward and no one would want to talk to me.  Even more than that my anxiety whispered,  people would most likely hate me or think that I was not cool enough to be there (I work with teenagers, this is a thought I find hard to escape). And then I decided on Global Running Day last year to make the leap, except I had my opt out on hand. I couldn’t get there,  then Rich stepped in and connected me to Thai. The entire car ride my silent mantra was, “One time, you don’t have to come back. Just one time, you can do this.” The first five minutes after getting out of the car were excruciating, I felt like I needed to run away, to disappear, to pee, to be in any literal space that wasn’t QE Park. But then something flipped, and amidst the hugs and high fives and loud voices I started to relax and laugh and say hello. By the end of the run I knew that I needed to come back. I needed to be a part of this community. You all were my chance and everyday I grateful that I made that choice. All of the lies that my brain told me have had to fall away because when I am there it is nothing but support, inclusion and my favourite, swearing! I love that this feeling, this energy does not stay locked in groups or cliques, that it is extended to everyone who takes a chance on us and shows up and then some. You all step up  for the community and spread so much love and compassion it humbles me. I strive to do better based on the examples you set, not because I am afraid that I won’t have a place in the community but because I am inspired to help make the community a better place for all of us through your example.

It would be a lie to say that those voices and anxiety are gone, even as I was on my way to the (un)diclosed event I had my reasons as to why I needed to not go (which is absurd as I have worked out in Seattle before), I had my outs all lined up. But thinking of the community, that indescribable quality of NP I made myself go. It was the right choice. I am better for having been there. For, as always, the NP community whether it is YVR or SEA, embraced me and coaxed me out of my awkward shell for a couple of hours. When I was running through the darkened streets of Seattle, just like when I am in QE Park,  I felt like I got to be all the best parts of me.

There is something special that happens in between the hazy street lights and dark sidewalks around QE park every Wednesday morning. It is a mixture of intention and chaos, love and whimsy, not to mention sweat, dirt and cursing. It is created and recreated when we aren’t looking, when we are distracted by the process of weary bodies and hugs. Each week something incredible takes place on that pavement and carries forward with each of us for the rest of week. It is that intangible feeling that keeps me showing up and will bring me back each and every time.