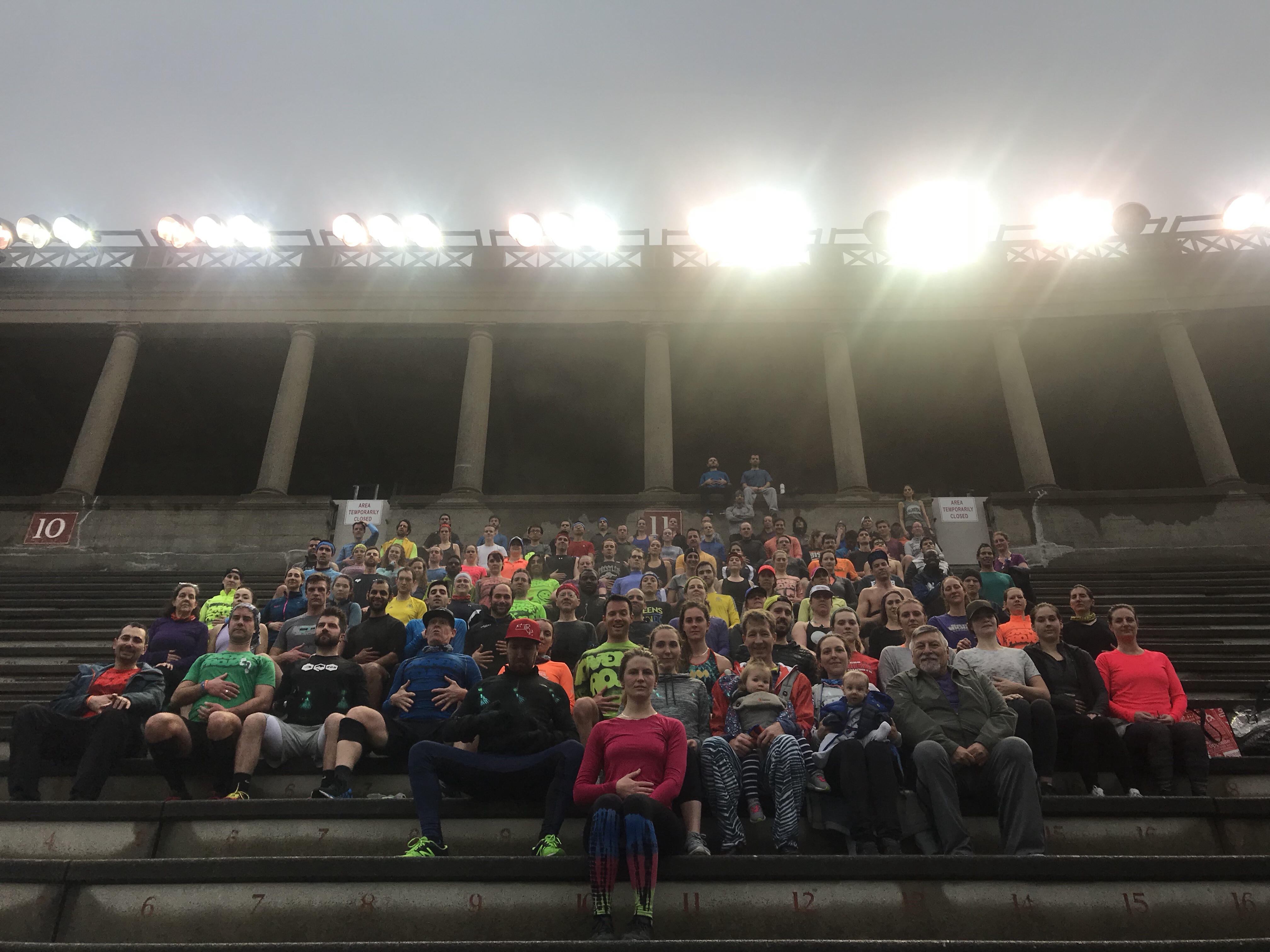 Have you ever heard the phrase, “When it rains, it pours?”

The one that alludes to the feeling we sometimes get when something goes wrong, or feels bad, or just isn’t how we expect…and then seemingly everything else ends up just as shitty?

I don’t mean how it was kind of spitting rain on us this morning, and the forecast made it seem like it was going to be one of those balmy humid mornings.  Sure it was wet and humid but it wasn’t exactly warm or downright cold, but the weather really wasn’t that bad.

The saying is better exemplified by this morning at the stadium, when we started the 5:30 group and thought we were good to go with the old favorite #RobotMan3, which would send the Tribe from section 37 to 19, then sprinting underneath the stadium back to 37 to attempt to repeat the loop 2 more times.  And just about the time the front of the crowd was circling around to 37 the first time, our stadium-construction friends put up yellow plastic chains to block off section 34.  So we began redirecting people to pop up at 33, and run down toward 15.  BUT THEN by the time we could communicate that to everyone…more chains were up blocking off two other sections, making our loop start at 29 and finish at 11.  But some people were so confused by the redirection, they were popping out AT section 11, wondering where everyone was.  Others just started running back towards 37, so as to never lose the Tribe.  And just when we thought it was a little messy, people start saying, “yeah that’s the third different set of directions…”

Then at 6:30, we figured we’d avoid the whole madness going on on that side of the stadium and we’d run #RobotMan3 from section 19 down to 1, looping underneath.  That is until our Stadium construction friends told us we just couldn’t run underneath anymore.  So some people ran back and forth from 19 to 1 to 19 and so on.  Others tried the Frogger method of running along one stair from 1 to 19, in the attempt to start again at the beginning.  Everyone at one point or another seemed to look around wondering where the hell to go.  I did a section next to someone at the 6:30 workout who forgot which section he had just done and wasn’t completely sure which direction he was going.

Sometimes we just don’t know the obstacles we’re going to run into.  You never know when someone’s gonna throw up some yellow plastic chains in your path and you’re still gonna have to figure out how to get from here to there, or how to get your work done, regardless of the chains.

We are #weatherproof* and the Tribe is strong.

*if you think I only mean that we can withstand a rainy workout or that we just show up in all the weathers, I mean this AND that we are weatherproof in the storms of life.  We’re stronger than we realize and sometimes the shitty weather just gives us an opportunity to see how much we are able to overcome.